A Funeral for Lightning a film by Emily Kai Bock. 2016, USA, 24 min. Submission and the quiet search for autonomy from an acclaimed music video director. 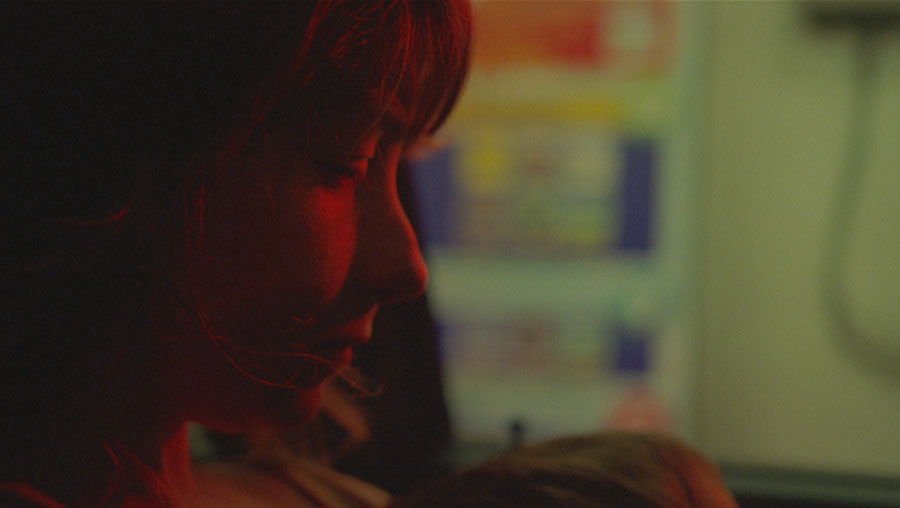 This week, we’re excited to host the online premiere of Emily Kai Bock’s first narrative short film, A Funeral for Lightning. The wonderfully talented Canadian filmmaker has been a director to watch since making her first music video for Grimes’ “Oblivion”, which Paul Thomas Anderson called “fucking great” after screening it as part of his masterclass at the New York Film Festival for his film, Inherent Vice (2014). Emily Kai Bock is one of the most notable music video and commercial directors in recent years. She has provided stunning, award-winning visuals for artists such as Arcade Fire, Lorde and Grizzly Bear, along with distinctive commercials for Google, Yves Saint Laurent, and Coca-Cola, among others. With A Funeral for Lightning, Bock delivers a beautiful, sensitive and perceptive film. The short is told from the perspective of Mandy, a woman stuck between the promises made to her by her charismatic husband and the stark reality of her situation. Her husband, Cornelius, sells her on his desire for a “free life” off-the-grid, growing his own food and singing by the firelight. In reality, Mandy, who is now seven months pregnant, is left for days in their small, dilapidated house in the middle of nowhere, without money, food, or any means to leave.

To the filmmaker, the short is a reflection on abandonment and neglect as a form of emotional and psychological abuse in relationships – how the intention of love is an illusion if not supported by action, and that illusion itself can be very toxic. Bock was inspired to write this story from fragments of personal experience, as well as hearing similar stories echoed by mainly other women. She challenged herself to create something completely different from her past work in music videos and commercials:

“I wanted to direct a film that was quiet, slow, and locked-off – sort of the antithesis of every music video I made – absent of music, cutting to the beat, and swooping Steadicam. I also wanted to play with the subjective camera perspective of a protagonist who isn’t necessarily steering the story, which is something that screenwriting books tell you to avoid! But the film was about being on the other side of a loud, narcissistic and dominating character, because in real-life not everyone has a lot of agency in that situation. The protagonist is in a prison of her own submission and spends the film trying to find her strength and autonomy.” EMILY KAI BOCK

The non-linear structure that cuts back and forth, from present-day to flashbacks and dreams, was an early intention in the screenplay. Bock wanted to draw us close to her protagonist’s distressed mental space, which she describes as “caught in a loop of playing back memories and dreaming, trying to understand how she ended up there and to figure out what to do about it.”

When scouting in Tennessee, Emily Kai Bock street casted her lead actors, Annie Williams and Daniel Allen Frazier Jr. – two people who had never acted before, and yet deliver authentic, lived-in performances. She credits the dedication they had to the roles, and explains that she learned, when casting for music videos, “how to find the real fictional character in the real world.”

The director’s references for the look of the film were the photographs of Joel Sternfeld and William Eggleston, as well as the paintings of Edward Hopper. Bock and her close collaborator – and real-life partner – cinematographer Evan Prosofsky, try to shoot as often as possible on film. She states, “I’m so in love with film; the color palette and tones that you get on film is so rich that you barely need color-grading. I’m always so happy with the process and result, it just feels genuine, like the mix of human sight and oil paint…”

Prosofsky elaborates on their choices for A Funeral for Lightning: “We landed on an approach we first played with on our music video “Afterlife” for Arcade Fire, where we blended 70 mm dream sequences and 35 mm moments of reality together to heighten certain scenes. I was blown away by the way 70 mm gives each shot an emotional punch, the clarity and depth seemed almost transformative, breaking free of the romantic gaze 35 mm so frequently offers.” To make this possible within their small budget, they worked with a small local crew and a lot of natural light, and shot the film with leftover short ends (the 70 mm film stock was left over from Interstellar!).

Emily Kai Bock was born in Toronto, Ontario and is now based in Los Angeles. She graduated with a Bachelor of Fine Arts from Emily Carr University in Vancouver in 2007, with a focus in painting and sculpture. She began making music videos for her friends in Montreal – such as Grimes’ “Oblivion”, which became a viral and critical success. Bock was able to attend Sundance two years ago, for writing, directing, and editing a short documentary on the New York underground rap scene, called Spit Gold Under an Empire (2013), which she made in partnership with Sundance TV and Nokia Music.

A Funeral for Lightning premiered at the Toronto International Film Festival, where it was selected by TIFF as one of Canada’s Top Ten Films. It won the Grand Jury Award for Best Short Film at the LA Film Festival, an Honorable Mention for Best U.S. Short and Best Tennessee Short at the Nashville Film Festival. In 2017, she was granted a year-long fellowship to develop her feature by Cinereach.

Emily Kai Bock is currently writing the screenplay for her first feature, which will be a new departure in genre for her. We couldn’t be more excited.  You can see more of Emily Kai Bock’s work by visiting her website.