All Over the Place a film by Mariana Sanguinetti. 2017, Argentina, 1o min. A witty, Akerman-esque debut about one young woman and a very long voicemail. 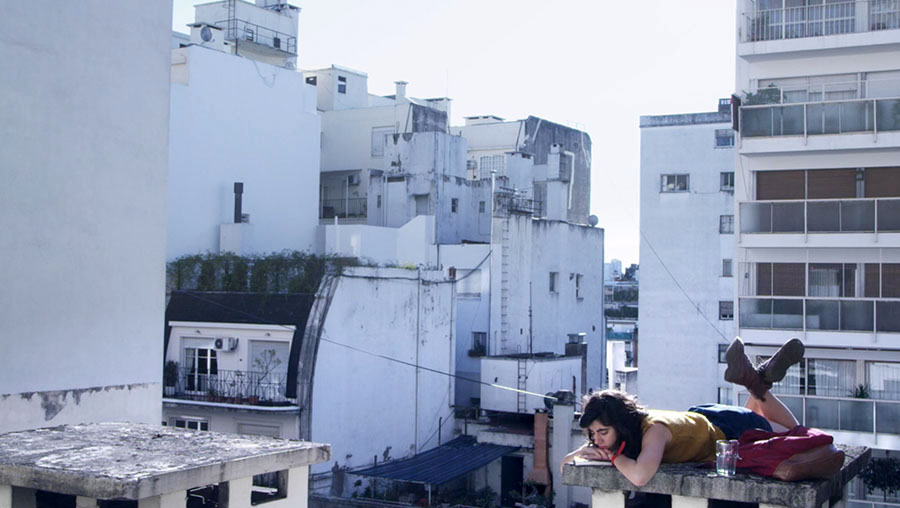 This week, Le Cinéma Club is screening All Over the Place (Antes de irme), a sweet, sly debut short by Argentine filmmaker Mariana Sanguinetti. A young woman (Agostina Luz López) enters an apartment. She has the keys and knows her way around. As expected, she finds her books, her ficus plant, her old habits. But Jimena is an infiltrator in her own home, assuming her role as burglar with curiosity and clumsiness. She has found a way to enter the past through a side door – and then to hang out for a while, enjoying a glass of cold water and the sun of a summer afternoon. A world premiere at the International Film Festival Rotterdam in 2017, Sanguinetti’s elegant, ingenious short went on to play the New York Film Festival and Habana Film Festival. The construction is deceptively simple – one actor, one location. However, Sanguinetti and López fully exploit this spare setup, patiently working their way up through a Buenos Aires apartment building from lobby to rooftop, and finding new sources of humor and insight at every turn. The film wittily deploys technologies against each other (the feedback loop of a cellphone and an answering machine provides a perfect sound gag) and observes its protagonist’s vulnerabilities and daydreams without judgement or cynicism. We were reminded of the effortless anarchism of Chantal Akerman (who Sanguinetti has acknowledged as an influence), especially her shorts Saute ma ville (1968) and J’ai faim, j’ai froid (1984), and of Faye Wong’s weirdly affectionate home invasion in Wong Kar-wai’s Chungking Express (1994).

Marianna Sanguinetti is a filmmaker and actress from Argentina. She is an alumnus of the Universidad del Cine in Buenos Aires, where she completed Antes de irme as a student, and has worked on a number of other short films as an actress and assistant director. She is currently writing her first feature in collaboration with Renzo Cozza, an actor and filmmaker who appeared in Dear Renzo (2016) and La novia de Frankenstein (2015, both previously screened on Le Cinéma Club).