American Autumn a film by Albert Moya. 2012, USA, 20 min. Children enact the everyday catastrophes of the bourgeoisie in an early work from a rising talent. 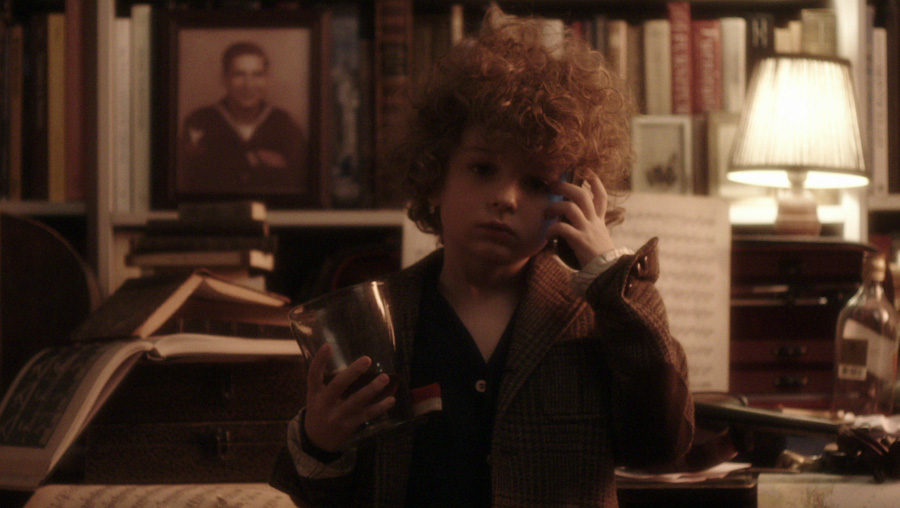 This week, we present a surreal melodrama, the first short film made by twenty-seven year-old filmmaker Albert Moya while he was in film school. In American Autumn, New York socialites in their 40s are played by young kids. Two couples are having an intimate dinner, but when an uninvited friend shows up, the evening takes a sour turn. The early work of a rising talent embraces the genre of family dinner dramas and captures the absurdity and comedy of the small everyday catastrophes that threaten the way of life of the bourgeoisie. Watching films like Luis Buñuel’s The Discreet Charm of the Bourgeoisie and Thomas Vinterberg’s The Celebration, Moya always thought the situations had such foolish and childish qualities that it would be fun to portray a similar scene with actual children playing the parts. He wrote the screenplay with his friend Silvia González Laá, developing the narrative by following the structure of a tasting menu. Moya produced the short on his own with the help of his cinematographer Rob Leitzell (who also shot Benh Zeitlin’s short Glory At Sea); “I had no experience and Rob came on board putting in so much energy, attention and time,” Moya explains. He found the different kids by posting ads around the block where he lived at the time in downtown Manhattan.

“I’m moved when I remember shooting the project. I would probably shoot it differently today, focusing less on the aesthetics and more on the performances and tension of the characters. I had no film experience at all. When you lack knowledge, you’re forced to work only by following your instincts, the things you love and common sense. I enjoy the experimental factor while executing an idea, because uncertainty makes me work much more passionately.” ALBERT MOYA

Albert Moya grew up in Catalonia, Spain in an independent community. One of his favorite films is Noah Baumbach’s Margot at the Wedding as it reminds him of his childhood and the charismatic women that raised him. When asked about filmmakers that inspired him, Moya cites Fassbinder, the Dogme 95 movement, Carlos Reygadas, Terrence Malick, David Lynch, and Peter Greenaway. “I admire movies that have a very strong point of view, films that can tell you a story you might already know but that show it to you through a different, new and distinct perspective.” Albert Moya has directed a new short film entitled Baton that he wrote with Efthymis Filippou (Dogtooth, The Lobster) ­— more radical and experimental than American Autumn, and with a strong political edge. It will come out later this year. Moya has also directed numerous branded films for clients such as Dries Van Noten, Mulberry, Gucci, Derek Lam, and short documentaries about creative personalities such as Ricardo Bofill, Linda Rodin, Marie-Louise Sciò, Kiko Mizuhara and Peter Marino. He is represented by The Collective Shift. Moya is currently working on his first feature in which a woman and a son live on a secluded island where moral values don’t apply — this island will be Mies Van Der Rohe Pavillion in Barcelona.