Among Us a film by Clément Cogitore. 2011, France, 30 min. Contemporary geopolitical politics with a mythological echo in a short film about illegal immigration. 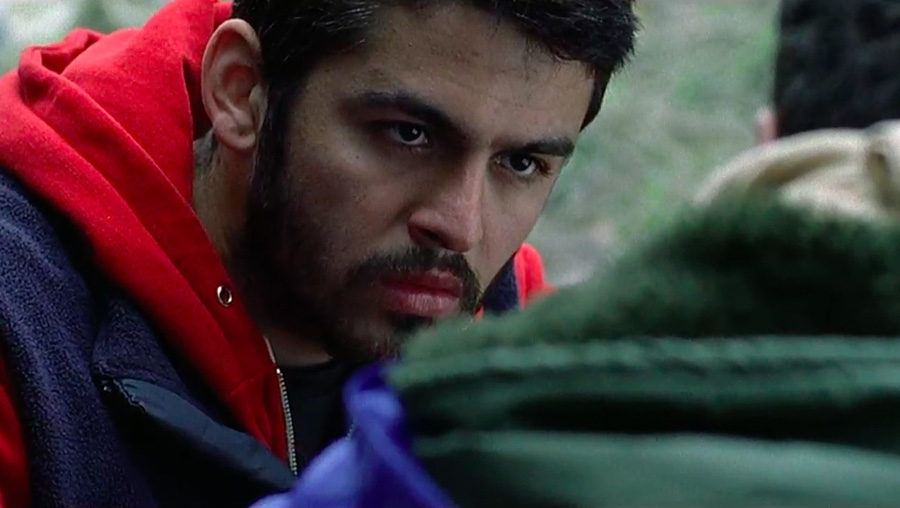 To coincide with the 45th edition of New Directors/New Films in New York City, Le Cinéma Club is presenting Among Us, directed by Clément Cogitore whose debut feature Neither Heaven Nor Earth (The Wakhan Front) is an official selection. New Directors/New Films is an annual festival presented by the Film Society of Lincoln Center and The Museum of Modern Art that has uncovered such directors as Pédro Almodovar, Chantal Akerman, Hou Hsiao-Hsien, Christopher Nolan, Laura Poitras, Spike Lee and Kelly Reichardt. Neither Heaven Nor Earth, written in collaboration with Thomas Bigedain, premiered last year at Critics’ Week in Cannes and was nominated for the César Award for Best First Feature.

Cogitore is a film director who has come to cinema through fine art — much like Virgil Vernier and Justine Triet, directors whose films have screened on Le Cinéma Club, or Steve McQueen. After art school, Cogitore studied at the selective Le Fresnoy – Studio national des arts contemporains, a post-graduate audio-visual research and production center in the north of France. The 32-year-old French director is already very accomplished — with regular solo and collective art shows since 2011, he has won a number of prestigious prizes in the art world, and his films have been selected by major film festivals around the world.

In Among Us, Amin, a young illegal immigrant, has recently joined a group of other illegal immigrants camping in the forest.  With every night comes the opportunity to attempt sneaking into the dockyards and hiding under a truck.

“Cinema about immigration is almost a genre of independent film. There are codes within that genre, codes that tell an ancient story that I call ‘the permeability of the worlds’. It’s the story of the invisible and visible worlds, the living world and the world of the dead… The border between two countries is also the frontier between many worlds, and many things…” CLÉMENT COGITORE

Cogitore found the inspiration for Among Us while scouting in the north of France for an art film. As he was walking through a dense forest, he came across a path, where he first noticed some trash, and finally, suddenly a camp. “It felt like a ghostly presence,” explains Cogitore. Later, as Cogitore was shooting the film, he encountered a mobile home storage site with thousands of unused mobile homes —  and, on the other side of the fence, hundreds of homeless refugees camping. Cogitore decided to never specify the location of the film, or name any countries — he wanted the border in the film to be a symbol for immigration crises all over the world.

The work of Cogitore, as a visual artist and film director, considers contemporary politics and geopolitical matters while evoking ancient or mythological stories and concerns — while also exploring Cogitore’s own perceptions, obsessions, and passions. Clément Cogitore is currently finishing a video installation about Aurora Borealis, which will be shown at the Palais de Tokyo this summer. He is also prepping another project, which he plans to shoot in Siberia, for an upcoming show at the BAL in Paris. He is developing a new feature.