Autobiographical Scene Number 6882 a film by Ruben Östlund. 2005, Sweden, 8 min. Three long takes from the acclaimed director of The Square, imbued with his singular sense of social tension. 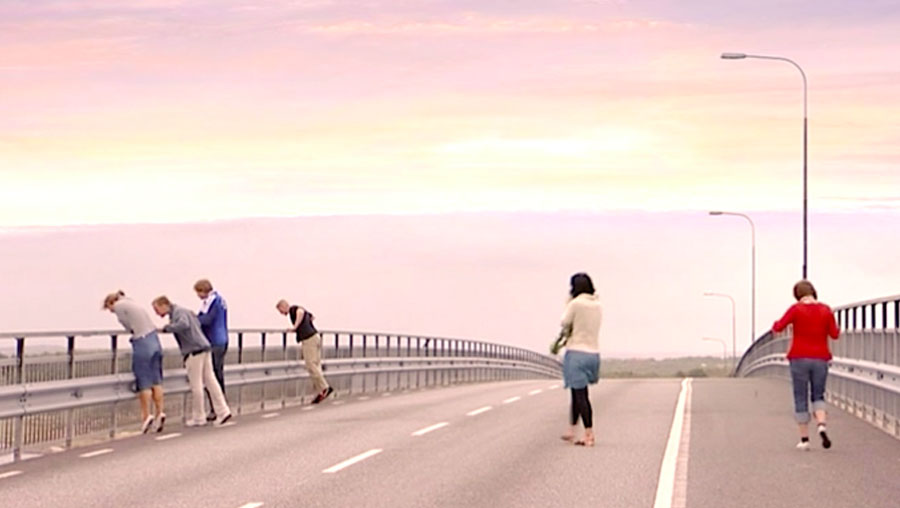 To celebrate the theatrical release of this year’s Palme d’Or, Ruben Östlund’s ambitious and impressive The Square, we are presenting the Swedish filmmaker’s 2005 short film Autobiographical Scene Number 6882. One of the outstanding qualities of film, and a constant hallmark of his work, is the filmmaker’s ability to translate the subtleties of awkward moments into everyday human interactions and relationships, depicting them with both humor and suspense. Comprised of three long takes, Autobiographical Scene Number 6882 follows a group of Swedish tourists who are debating while watching one of their friends preparing to jump from a high bridge in a river. The film is a great, early example of how the Swedish filmmaker achieves his singular sense of social tension in a near-ordinary scene. The Square – Ruben Östlund’s follow-up to the brilliant Force Majeure (2014) – stars Claes Bang and Elisabeth Moss in a cinematic social satire that explores the contemporary art world through the existential crisis of the respected curator of a museum. “If I reach my goal with a film today, then it should be a combination of social commentary, stand-up comedy and horrifying awkward moments.” RUBEN ÖSTLUND

This eight-minute short film was co-written by Ruben Östlund and his producer Erik Hemmendorff with whom he founded the company Platform Produktion in 2002. During the three days of shooting, one day for each shot sequence, the director faced a dilemma, which he describes as “a founding experience as a director” in his DVD picks video for Criterion. At his request, his team had spent half a day building a tower for a shot, and the filmmaker realized after a test that the image did not suit him. He found himself having to decide between confessing to his team his mistake, which would risk losing their confidence, or claiming that the plan suited him only to have to reshoot it later. He finally chose to admit his mistake, and ironically his experienced sound engineer replied, “Now I really trust you”. Ruben Östlund develops the importance of this anecdote: “I think that’s the mise-en-scène. When you’re a director on a shoot, you’re under a lot of pressure. And if we guide our own instrument, when we look at something and it’s not exactly the image we were looking for, you have to be very sensitive to this inner instrument. We must follow him. As soon as we move away, then it is simply to avoid the difficulties of shooting  and from this same movement we move away from the reason why we are a director.”

The Square was Ruben Östlund’s first film to be selected in the Cannes Festival’s official competition, winning the prestigious Palme d’Or. But the majority of the filmmaker’s feature films had already been invited to Cannes; Happy Sweden (2008) and Force Majeure in the Un Certain Regard section, and Play at the Directors’ Fortnight in 2011. The Swedish filmmaker started with graphic design and then made ski films in the ’90s, before changing courses to study film in Gothenburg where he met his collaborator and producer Erik Hemmendorff.