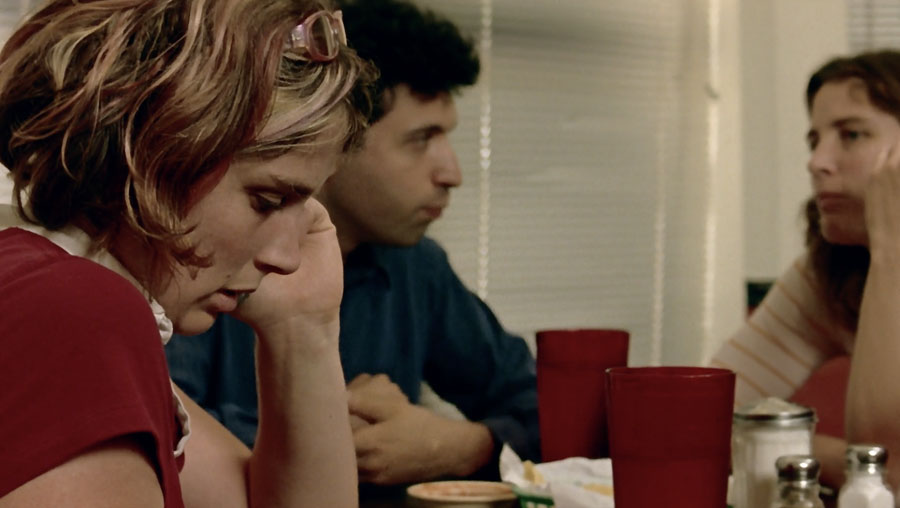 This week, on the occasion of the release of his latest film Support the Girls, we are very proud to be screening Andrew Bujalski’s wry, affectionate, and sneakily profound third feature, Beeswax. It is the tale of two sisters, roommates and close friends who have helped to shoulder each others burdens for as long as they can remember, and played by real-life siblings Tilly and Maggie Hatcher with tenderness and infectious humor. Framing the two young women within a detailed and lively depiction of a small Austin community’s complex network of lovers, coworkers and acquaintances, Beeswax is a continually surprising and insightful revelation of the everyday. As the film begins, Jeannie (Tilly Hatcher), co-owner of a vintage clothing store in Austin, Texas, finds herself assailed by anxieties that her business partner (Ann Dodge) might be considering legal action against her. She turns to her unemployed sister (Maggie Hatcher) and law student ex-boyfriend (Alex Karpovsky) for guidance, and as the knots of her quandary tighten and elaborate, Bujalski inaugurates an investigation into the economic lives of ordinary Americans that would continue into his most recent films, Results (2015) and Support the Girls. At the same time, this main narrative is densely interwoven with dozens of side plots and relationships, all drawn with meticulous, subtle detail, and featuring some of the best performances of “mumblecore” stalwarts like Karpovsky, the Zellner brothers and Bob Byington. Looking back on the film now, Bujalski told us:

“I feel profoundly lucky to have made 6 feature films so far. Of these, Beeswax seems to be the one that was seen by the fewest people, and received the least enthusiastic response. Probably not coincidentally, I continue to suspect that it is my best.” ANDREW BUJALSKI

One of the key filmmakers of recent American independent cinema, Andrew Bujalski is a humanist with a playful sense of form. His films have consistently found insight in unexpected places, pushing back the boundaries of the “mumblecore” movement of which he’s considered a leading figure. A student at Harvard University, he was mentored by Chantal Akerman and remained close with the Belgian director until her passing in 2015. His first films, Funny Ha Ha (2002) and Mutual Appreciation (2005), have been enormously influential for their attention to character and lo-fi but considered aesthetic. In 2013 Computer Chess, an eccentrically philosophical period piece shot on analog video cameras, premiered at Sundance. His newest film Support the Girls stars Regina Hall as the overwhelmed manager of a “sports bar with curves” and is now opening in theaters, following premieres at SXSW and BAMcinemaFest.

Le Cinéma Club would like to thank Andrew Bujalski, The Cinema Guild, and Contre-Allée for making this program available on the site.