Bronco’s House a film by Mark Jenkin. 2015, United Kingdom, 44 min. A young couple’s quest for a roof in this Cornwall-set drama with the atmosphere of a thriller, made with hand-developed B&W 16mm.

Independent British filmmaker Mark Jenkin makes films that resemble his characters: rough-hewn but steelilly determined, thrifty, self-reliant, quick-witted and fiercely loyal to the Cornwall villages and harbors from which they’ve come. In his delightfully original medium-length Bronco’s House, the titular hero and his very pregnant girlfriend find themselves facing sudden homelessness, crushing class divisions, and an affable but overly flirtatious fisherman in a bracingly down-to-earth scenario with the tension, atmosphere, and formal panache of a classic thriller.

Jenkin works according to a 13-rule manifesto of his own devising that forces him to come up with creative solutions to his self-imposed limitations. He shoots on 16mm stock, then hand-develops the footage in a self-invented concoction of cheap instant coffee and vitamin C, lending the finished film its gorgeously irregular and material texture. “The story was originally conceived when the housing crisis was particularly relevant to Cornwall, not long after I’d returned home… when the disparity between wages and house prices was being highlighted. Now it’s relevant all over the place as the gap between the ‘haves’ and ‘have-nots’ has grown.” MARK JENKIN

Bronco’s House’s snappy, elliptical editing is in part imposed by Jenkin’s camera, a clockwork Bolex with a 28-second take limit. Leaning into this constraint, he’s found masterful ways to activate everyday situations with wickedly efficient cross-cutting and associative montage. He cites Robert Bresson, Jean Vigo and the Cornish fisherman-turned-painter Alfred Wallis among his influences, and his form-conscious dexterity with genre reminds us of Nicolas Roeg, Mario Bava, and the new wave of independent horror led by Robert Eggers and Ben Wheatley.

Jenkin’s most recent film is the feature-length Bait, another adventure on the Cornish coast shot according to his manifesto and on hand-processed B&W 16mm. It premiered at Berlin, played New Directors/New Films and IndieLisboa (where it won the Audience Award) and is being released in UK cinemas on August 30 by the BFI. He is currently at work on his next feature project, an island-set horror film shot in color. 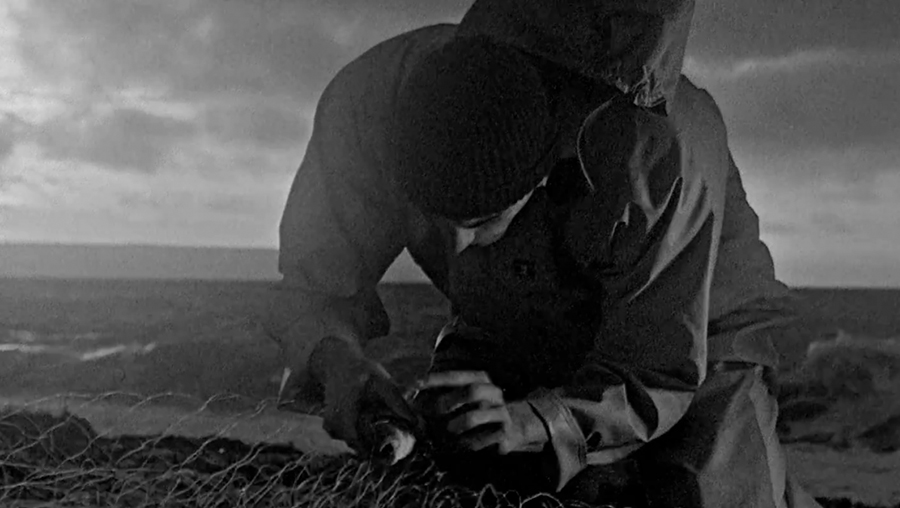 Trailer for Mark Jenkin's Bait, out in UK theaters August 30.