Burning Heart a film by Vincent Tricon. 2015, France, 25 min. Innocence entwines with the burlesque in this peculiar anti-teen movie set in southern France. 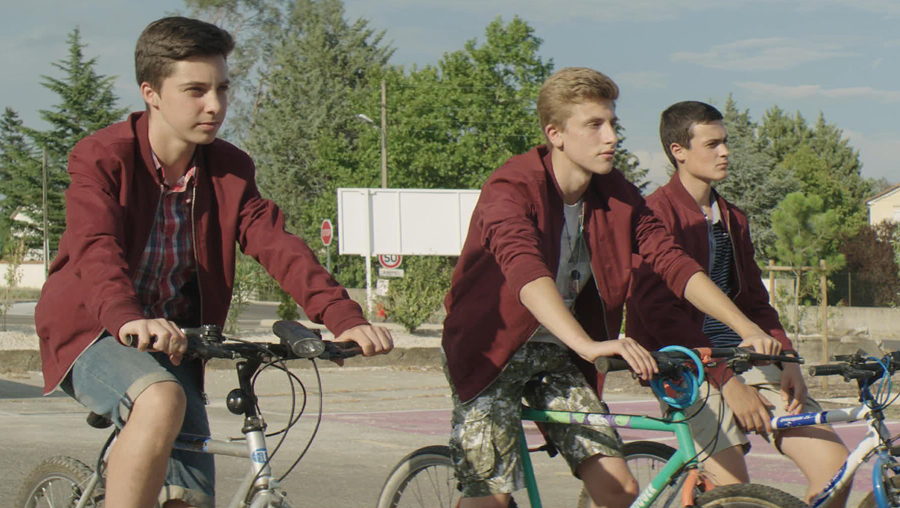 This week, we present the online premiere of Vincent Tricon’s first short Burning Heart. The young French filmmaker and film editor introduces his movie as a “mini-drama” revising the codes of the teen movie. In Burning Heart, three best friends live in a place lost in the wheat fields. Their friendship is challenged when they meet the prettiest girl in the village, who works at the gas station and participates in local beauty queen contests. Vincent Tricon wanted to make an anti-teen movie, avoiding the classic tropes of the genre, such as stereotypical arguments with parents. He focused instead on the innocence of his young characters — unafraid to make them sweet and naïve in the film. In Burning Heart, adolescence, the passage to adulthood, is depicted as a loss of innocence following a conflict, ordinary as it might be. Vincent Tricon first brought the script to his producer Saïd Hamich, with whom he worked on many rewrites, and they obtained subsidies both from the CNC and the French region Languedoc-Roussillon, where they shot. The filmmaker allowed himself to prep the film over a long period of time, rehearsing frequently with actors he cast locally outside schools and in the streets. He wanted to give the movie a specific tone, reflecting the ingenuity of his characters but also suggesting the slightly strange and almost burlesque. He quotes the following movies as references for this film: Mes Petites Amoureuses (1974) by Jean Eustache, De Bruit et de fureur (1988) by Jean-Claude Brisseau, The Outsiders (1983) by Francis Ford Coppola, and A Swedish Love Story (1970) by Roy Andersson. He also had in mind the work of the painter Giotto, giving different proportions to his characters relative to their importance in the frame.  Tricon and his cinematographer tried to alter the perspective using scope objectives with a zoomed format (1.85).  While editing the film, Tricon sought a particular rhythm, one that could follow the film energetically while also allowing time to show the slow and monotonous life of the region.

“I didn’t want to fall into stereotypes of the teen movie, even if they can make a film more spectacular. I wanted to film with a certain coyness and reserve, with a singular tone both innocent and slightly burlesque.” VINCENT TRICON

Vincent Tricon studied Cinema at the University of Montpellier before joining the prestigious Femis school in Paris as an editing student. What interests him today is creating “objects” of cinema, researching new images in filmmaking, whether he is working as a director or film editor. That is also why he chooses to work with young and rising directors Caroline Poggi and Jonathan Vinel – he edited their famous short, As Long As Shotguns Remain, and will be editing their upcoming debut feature. He just finished shooting his second short Glister, a sci-fi minimalistic melodrama shot in black and white.