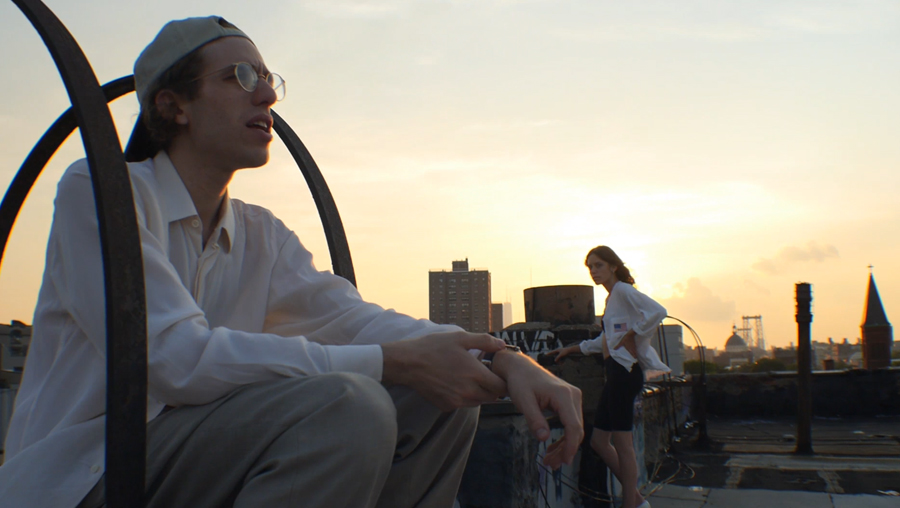 We are thrilled to premiere this week the beautiful and audacious debut feature of New York filmmaker Roi Cydulkin. Caprice is a free-form film, taking the viewer through an impressionistic, cinematically trippy New York City experience. We follow a young man (played by Cydulkin) struggling to find himself through three strained relationships – the three acts of the film – as he descends into a surreal kind of sickness. This visually captivating, music-driven film features wonderful naturalistic performances by French DJ and actress Clara Deshayes (Clara 3000), actress and model Abbey Lee (Mad Max: Fury Road), Terrible Records founder Ethan Silverman, actress and artist India Menuez, and the film’s cinematographer Patrick Parker. The director likes to say his film is not for everyone – but please let Caprice speak for itself! We hope you’ll be taken by it, as we were.

Caprice presents a young couple who lock themselves into a kind of childlike fantasy, with the city as their playground. As reality starts creeping back inside their world, the relationship begins to sour and collapse. For the remainder of the film, the young man attempts to recreate this codependent fantasy existence with whomever he can, with increasingly disturbing and failing results.

Cydulkin shot the film a few years ago, inspired by the people he was engaging with at the time: “The feeling in the air, the kind of dissatisfaction, competition, and confusion at that stage between childhood and adulthood that marks one’s mid-20s.”  The young filmmaker self-produced the film with no budget and shot the film over the course of ten days. He cast his friends, and led the small crew of six people, with everyone helping as they could. “It was fluid and very fun, everyone was incredibly passionate and generous. It was wild but beautiful; it truly felt like a team effort.”

“Caprice was about what happens when experience is suddenly placed within a frame: not the New York all New Yorkers live in, but the New York that is lived-in by the characters of the movie – just like how the New York you might live in isn’t the same New York that your neighbors see when they walk around… I wanted to make something from the gut, to trust in my taste and in my skills, trust in the people with whom I was making the film, to trust in the seed of the idea and in the process.” ROI CYDULKIN

When Cydulkin came across the term “caprice”, he immediately knew it would be the title of his film. He offers us the different definitions, which for him evoked both the film and the production process: “A sudden and unaccountable change of mood or behavior, a lively piece of music typically one that is short and free in form, a painting or other work of art representing a fantasy or a mixture of real and imaginary features.”

As he was working on Caprice, Cydulkin was very inspired by movies like Haskell Wexler’s Medium Cool (1969), the Warhol films, documentaries like Alan Yento’s Cracked Actor (1975) and Jean-Pierre Gorin’s Poto & Cabengo (1980), Werner Herzog’s Stroszek (1977), and Nicolas Roeg’s films, particularly The Man Who Fell To Earth (1976).

Roi Cydulkin was born and raised in New York City. He also works as an editor for photographer Harley Weir and for art director and director Fabien Baron. He was a finalist for the Sundance Screenwriters Lab and is currently completing the script of his second feature. Cydulkin was making music for most of his early 20s, and he always imagined becoming a writer. When asked about directors he most admires, he cites Pier Paolo Pasolini, Abbas Kiarostami, Dušan Makavejev, Andrzej Żuławski and Rainer Werner Fassbinder, among others.