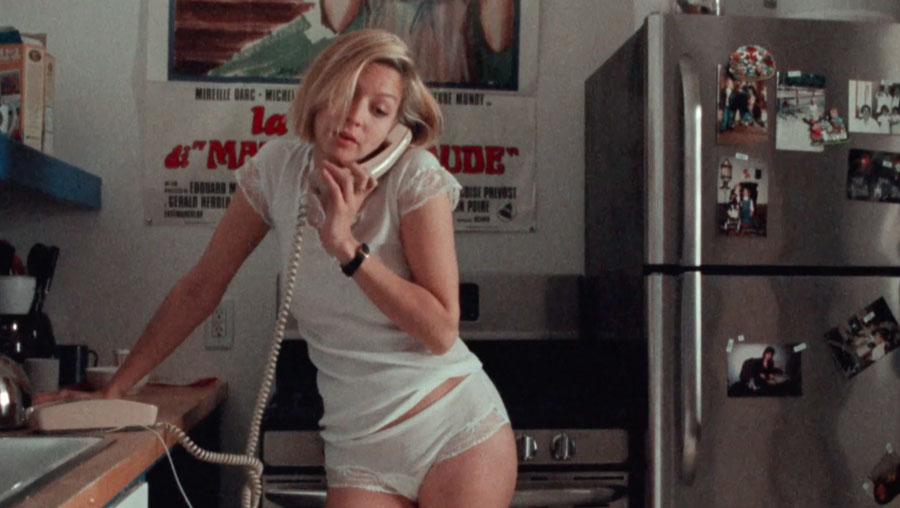 This week, we are proud to present the online premiere of Annabelle Dexter-Jones’ wonderful directorial debut, Cecile on the Phone. The actress-writer-director draws us into her tense, funny New York story, in which she stars as Cecile, a young woman who obsesses over her ex-boyfriend’s return to the city. Cecile distracts herself with a series of anxious, delusional telephone conversations, rife with over-analysis, as a giant sore develops on her mouth. Shot on 16 mm, the short is a tribute to the city that Dexter-Jones grew up in, as well as her love of seventies cinema and horror films. Cecile on the Phone reveals Dexter-Jones to be an exciting new voice in cinema.

Annabelle Dexter-Jones, who co-wrote the script with her friend Ellen Greenberg, initially conceived of an obsessive, delusional character, inspired by her personal experiences: “I was trying to explore a part of my growing up. We all hopefully go through this to some extent: fall off the beam, act insane on impulse, and lose perspective. As I got older, I started to be able to watch it happen, witness it and tell myself, “Oh that’s the crazy-me”… and watch it like a movie. So I made a movie about it!” In developing the lead character, Dexter-Jones began to think of the telephone as a driving dramatic device, and she was able to write the story:

“It’s about obsession and fixation. This lack of self-awareness where you’re just talking to yourself. The telephone also represents this. There’s something really indulgent about being at home and on the phone. I also have a nostalgia about this object that doesn’t really exist anymore, and some vivid memories of my mother in bed on the telephone with all her newspapers. It’s also so physical, almost like a body part, an extension of yourself, like a leash or like holding someone’s hand.” ANNABELLE DEXTER-JONES

Annabelle Dexter-Jones grew up spending much of her time watching movies, and she always knew she wanted to work in film. At the age of 13, she became interested in acting, taking courses at Lee Strasberg and Stella Adler in New York. She later graduated from Bard College, where she majored in literature and also pursued drama. It was during her time in college that she started seriously considering becoming a director. Dexter-Jones holds a dear place in her heart for the movies of the 1970s. The films of Mike Nichols are among the filmmaker’s favorites, and Paul Mazursky’s An Unmarried Woman (1978) is one of the classics she discovered while working on Cecile on the Phone. Dexter-Jones’ film is indeed a superb ode to the movies of that era.

Annabelle has acted in a number of shorts and features. She appeared in Leos Carax’s Holy Motors (2012), Jake Hoffman’s Asthma (2014), Jordan Galland’s Ava’s Possession (2015), and Tara Subkoff’s #Horror (2015). She recently finished shooting Swing Low, a horror film by first-time director Teddy Grennan in which she has the lead role. Annabelle Dexter-Jones is now writing her second short, which she plans to shoot this winter as a study for a longer feature. Cecile on the Phone clearly reveals Annabelle Dexter-Jones as a talented, exciting new filmmaker, and we cannot wait to see more of her films.