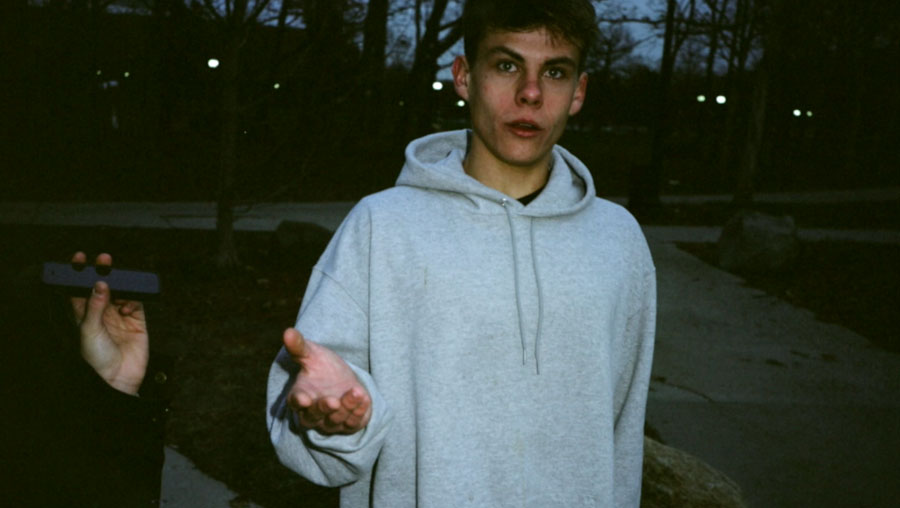 This week, we present the work of young British artists Raf Fellner, a photographer, and Tegen Williams, a painter. Their CSI project, comprised of three short films, takes on the concept of a pretend investigation, wonderfully mixing film and photography, reality and fiction. The film and its title were not conceived without a touch of humor. CSI 5 Boroughs (2015) sees the filmmakers become detectives as they investigate the case of a missing boy in Chinatown, tracking down real life characters around the five boroughs of New York City. The two other shorts were made in and around London. The very short CSI Landor House (2014) looks at a murder that took place in a council estate. The black and white CSI 1 (2012), the first in the series, follows detectives Cooke and Shickle as they search for a young boy in London, from Wormwood Scrubs to a greasy spoon cafe and a dog racetrack. “Inspired by photography’s magical way of saying a lot with not a lot at all – these short films use pictures and moving image to construct a narrative in search of truth. Using true events from news or personal experience, we, as photographer and director, took on the roles of detective to retell the story the way we saw it. The process of making each film became a performance in and of itself that I sort of regret not getting on film…” TEGEN WILLIAMS

Each film is inspired by a real fact from which Fellner and Williams imagine their own investigation. CSI 5 Boroughs (2016) takes as its starting point the real poster of a missing boy, which the duo uses to interview individuals, whether related to the boy or not. They question people about their lives, and add questions about this boy. We meet real characters who become the false witnesses of an investigation written by Fellner and Williams. This impression of “true false” offers an offbeat and interesting energy to their films. In CSI Landor House (2014), the filmmakers record the story of one of their friends who witnessed a murder in social housing in West London. They superimpose his testimony on a series of photographs and diagrams recreating the events. Finally, CS1 (2012), the film that initiated this project, is inspired by the book A Criminal Investigation by the Japanese photographer Watabe Yukichi. Fellner and Williams were struck by the photos; “They seemed so staged and cinematic, as hyper-real and almost ridiculous,” Fellner explains, “They line up!” They both grew up in London and are about twenty years of age. Fellner studied photography at the University of Goldsmiths and Williams studied painting at the Camberwell College of Arts. They have been working together for five years and have produced several clips including one for the recent song “Blue Train Lines”, by Mount Kimbie with King Krule. They have recently filmed a documentary about the Berber music they are in the process of assembling.