Dali’s Fantastic Dream a film by Albert and David Maysles. 1966, USA, 6 min. With Salvador Dalì and Raquel Welch. Rarely seen footage of the legendary painter at work on a bikini-sporting portrait of Raquel Welch. 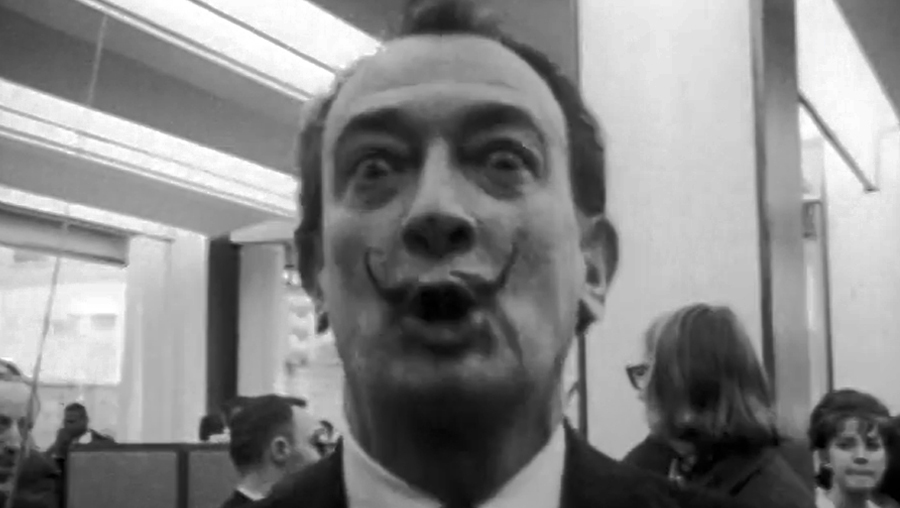 For the next two weeks, we are honored to present two wonderful short films by legendary American documentarians Albert and David Maysles, pioneers of direct cinema and some of our favourite filmmakers of all time. Dali’s Fantastic Dream and Meet Marlon Brando were shot in New York City in 1966. Both films demonstrate the Maysles’ historic talent for drawing intuitive, honest, and intimate portraits ­— here about two giant figures, captured simply while working and interacting with others. This week is a rarely seen six-minute film following Salvador Dalì in New York as he creates a portrait of the actress Raquel Welch, in a bikini. The film was commissioned by 20th Century Fox to help promote the release of their recent production Fantastic Voyage, starring Welch, for which Dalì was artistic consultant. We accompany the artist to his room at the St. Regis Hotel, where we witness his exuberant creative process. As Albert Maysles said about the film, “Dalì is so funny because he was so strange.”

”We have labored in each of our films to get as close to the truth as we could.” ALBERT MAYSLES

Albert and David Maysles have had a major, lasting influence on cinema. The brothers revolutionized documentary filmmaking in the late 60s and 70s. They were among the first cinéma vérité directors in America, along with Richard Leacock and D.A. Pennebaker – inventing lighter versions of cameras to go into the streets, to capture life as it is, as they observed it. They broke with conventions of documentaries by neither interviewing their films’ subjects nor using voice-over narration.

The directors were known for seeking the truth, working without scripts or predetermined plots. Albert Maysles would often say: “I’m a person whose only point of view is not to have a point of view.” The dramatic power in their films comes from the intimacy of their hand-held camera, and a preternatural gift for finding and capturing spontaneous, revealing moments. Jean-Luc Godard would call Albert Maysles the best American cameraman. Martin Scorsese wrote, in a foreword to A Maysles Scrapbook: “When Al is behind the camera, there’s a sensitivity to mood, to space and light, to the energy between the people in the room.”

The Maysles’ first classic was Salesman (1966), which chronicled vividly the life of four door-to-door bible salesmen. Two of their other best known masterworks are Gimme Shelter (1970), featuring The Rolling Stones’ 1969 American tour, and Grey Gardens (1975), the fascinating film about Edith and Edie Bouvier Beale in their decaying Long Island mansion. The Maysles made dozens of other beautiful films, including documentaries on figures such as Truman Capote, The Beatles, and Muhammad Ali. After his brother’s death in 1987, Albert continued making remarkable documentaries. Iris, about the 94-year old New York fashion icon Iris Apfel, was released in 2014.

We would like to thank Rebekah Maysles, Laura Coxson, and Jake Perlin for making this program possible on Le CiNéMa Club.