Dear Renzo a film by Agostina Gálvez and Francisco Lezama. Young Argentines in New York City navigate language, borders and something like spirituality in this comedy of confusion. 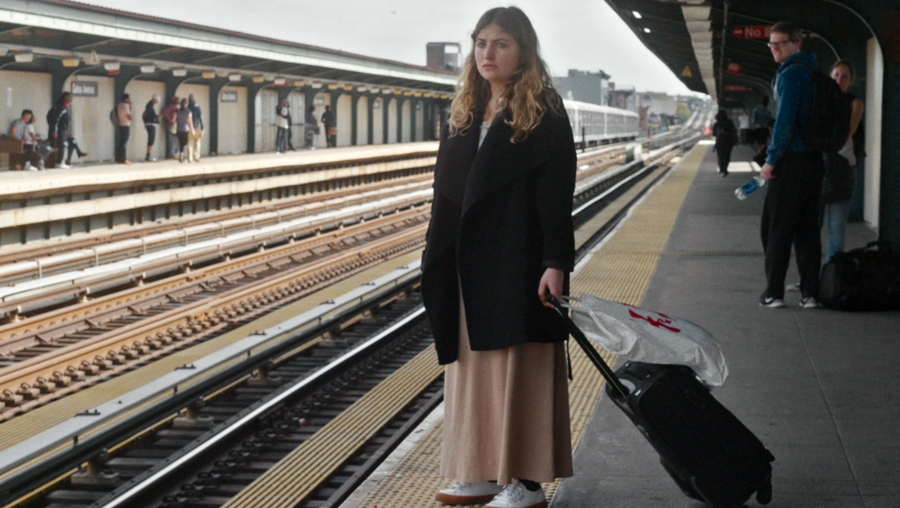 This week, we present the online premiere of Agostina Gálvez and Francisco Lezama’s New York City-set tale of Argentines abroad, Dear Renzo. In this witty and delicately surreal comedy of confusion, Renzo (Renzo Cozza) wants to apply for a masters degree at a university in New York, despite not having learned the language, while his friend Ivana (Miel Bargman) is buying clothes for cheap to sell at a profit in Buenos Aires. Then they stumble upon Mariana (Laila Maltz), a fellow Argentine, but one who might appear more disoriented than she really is, as well as truly befuddled New Yorkers Stephen Gurewitz and David Maloney. Thrown together by chance, the Argentines wander the city increasingly lost in a maze of currency exchange, translation problems, religious vocation and nocturnal flirtation. Following its world premiere at the Viennale, the short played at numerous American and international festivals, including Entrevues Belfort, FICUNAM, BAMcinemaFest and BAFICI, where it took the top prize in the Argentine short competition. Dear Renzo develops, and then playfully subverts, principles established in Gálvez and Lezama’s first co-directed short, 2015’s La novia de Frankenstein (2015), which we screened on Le Cinéma Club in 2017. Here as there they employ a loose, flexible narrative framework which allows chance and coincidence to intervene while shooting, and to become structuring devices during the editing and writing. The duo’s sharp eye for idiosyncratic performers, often drawn from Buenos Aires’ most prestigious acting schools and, in Dear Renzo, from New York’s independent film scene, activates dynamic exchanges between personality and character, with scripts conceived of and revised around the cast. It’s clear that for Gálvez and Lezama careful attention must be paid to an economy in image, in narrative and production that invests their films with a directness and simplicity recalling Jacques Rozier and late Rohmer, while revealing a milieu that is perhaps unique to their own cinematic universe.

And that clarity is essential in a universe as mysterious as Dear Renzo’s, full of odd slippages of language and identity, strange border crossings from country to country and dream to reality, and gleams of something like spirituality. Co-director Francisco Lezama says of his and Agostina’s film:

“We like thinking of Dear Renzo as a weird continuation or B-side to our previous short film, La novia de Frankenstein. When La novia was programmed in the New York Film Festival, we decided to take advantage of the occasion to bring three actors from Argentina to NYC, for the festival and to shoot. A small budget and a much smaller crew than we’d used previously allowed us to move, search out and register lots of lively action and real visual moments, that we decided to contrast with our almost cartoonish characters and plots. “It’s alive!” says Dr. Frankenstein; that was always our main preoccupation.” FRANCISCO LEZAMA

Francisco Lezama and Agostina Gálvez studied at the Universidad del Cine in Buenos Aires. Agostina currently lives and works in New York as a director, and is represented by Radical Media, while Francisco works as a projectionist at MALBA and the Museum of Moving Image and teaches film history at the Universidad del Cine in Buenos Aires. He is currently producing Una pintora romántica, his first feature film. Their work together has screened at Locarno, the Viennale, the New York Film Festival, AFI, BAFICI, BAMcinemaFest and FICUNAM, among other festivals.