Death on the Basketball Court a film by Nicolas Peduzzi. 2015, France, 20 min. Doomed love and a touch of crime from an up-and-coming French filmmaker. 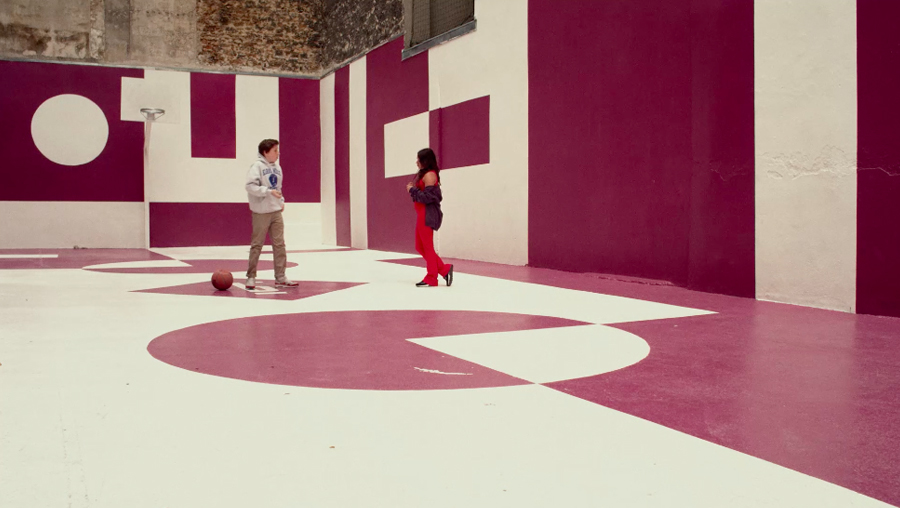 Le Cinéma Club is presenting a short film by the up-and-coming French director Nicolas Peduzzi. Set in Pigalle, an area in the North of Paris where Peduzzi grew up and lives today, Death on the Basketball Court tells a doomed love story between a young teenager and a young woman, with thriller elements and a touch of local crime. Peduzzi wanted to make a short with the group of young teenagers boys that plays basketball on the court near where he lives. The boys are close friends who were born and still live in the same building across the court. “There was a strong uniting bond between them that moved me” recalls Peduzzi. He thought of the boys as the Goonies of Pigalle.

The director grew up in Paris, but he spent most of the last decade between Rome and New York — a rich cultural heritage that comes through brilliantly in this short. His home area of Pigalle feels authentic, and the film gracefully mixes hints of classic Italian and American cinema with his unique perspective of contemporary Paris. The filmmaker admits to having stolen a few things from Pier Paolo Pasolini’s Mamma Roma (1962) to create the lead female role. He also rewatched films by Martin Scorsese for the thriller storyline. The latter came to Peduzzi when a friend of his who worked at a restaurant in Rome told him the terrible story. The friend found a dead man in the restaurant and, not knowing what to do, he left him in the restaurant’s courtyard, a story which quickly made it into local papers. The image stuck with Peduzzi, and after meeting the group of boys, he joined the two stories together in a script.

Pigalle, which is now one of the trendier areas of Paris, used to be a much rougher neighborhood, when Peduzzi was a kid. He wrote the script quickly, but he spent a lot of time with the young boys in order to find the right and most natural tone – somewhere between the boys sticking to the script and leaving room for improvisation.

The short was co-produced by Hugo Sélignac (Blood Ties (2013)) and the famous brand Pigalle, owned by Stephane Ashpool, one of Peduzzi’s childhood friends. Ashpool also coaches the basketball team of the teenagers who star in the film, and he had commissioned Paris-based Ill studio to art direct the current decoration of the court when it was threatened to be closed, making it now a cult place in the area.

“It is a film also inspired by our teenager days in this area. We used to hang in the streets and fool around, before going to play basketball. Including the darker element of the story was, in a way, going back to that period of time where those stories would happen much more often.” NICOLAS PEDUZZI

Nicolas Peduzzi sees this short as his film school, as he didn’t go to one. He started off focusing on acting, studying in various studios in New York and Rome, including Susan Batson. Although he always knew that acting wouldn’t fulfill him on its own, his best roles yet were in the plays Ivanov and then Othello, both directed by the great late Luc Bondy, who sadly passed away before the latter premiered.

For the past years, Peduzzi has directed short videos for his sister Antonine’s bag label TL-180, and a more experimental short film Mikado, for Pigalle, starring their other childhood friend, the brilliant French actor Paul Hamy. The film was projected as part of Pigalle’s 2014 fashion show in the Bouffes du Nord Theatre, and at the end the actors would come out from behind the curtains, wearing the clothes. The group of friends likes mixing film, fashion and theater, and they are planning more films together. Mostly, Peduzzi is currently editing his first feature: a docu-drama focused on a young woman who was born into the rich white oil society of Texas that shows the dark and tragic decadence of her life there. The project has the working title Southern Belle (2017), and is produced by Jonas Films and Imago — and we cannot wait to see it.