Done Dirty a film by Oscar Boyson. 2013, USA, 11 min. Verité and a touch of fantasy in Appalachia, from the producer of Heaven Knows What, Good Time and Frances Ha. 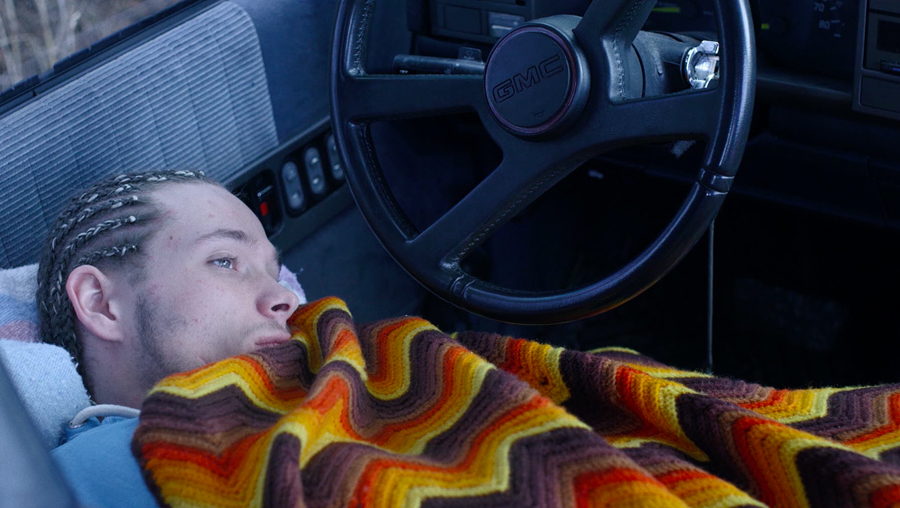 Oscar Boyson is a director and producer based in New York City. His credits as a producer include Josh and Benny Safdie’s Heaven Knows What (2015) and their upcoming Good Time (2017), Noah Baumbach’s Mistress America (2015) and Frances Ha (2012), and The Neistat Brothers (2010) television series. He has written and directed many short documentaries and films for brands and websites, some of which he calls pop video essays, which you can watch there. Done Dirty – set in an Appalachian town in Tennessee – follows real-life 19 year-old Travis after he is released from prison. With an unwanted fatherhood and miserable job prospects, Travis doesn’t have much to look forward to. Boyson met Travis and became acquainted with the Appalachian landscape of the town while working there as AD and producer on Brian Cagle’s feature Green Corn in 2010. The intimate experience of working with the town and its people inspired him to make a film where Travis would play himself and use material from his own life as a starting point for the story. Boyson wrote the film, drove to Tennessee, found locations, and cast locals in the supporting parts (no one in the film is a professional actor) over the course of a week in late 2013, then shot the film with a RED Scarlet in five days.

If most of the short feels intentionally shot in a vérité style, the film ends with a charming touch of fantasy that Boyson was pleased to add to Travis’ life on screen, and which suddenly anchors the short in the tradition of films about outlaws and runaways. In the time between their meeting in 2010 and the filming in 2013 Travis had been in and out of jail several times. He had a baby whose mother refused to let him be a part of the child’s life, and though he hadn’t had much success finding work he never had problems finding girlfriends. Boyson lets Travis’s personal story function as a vehicle to explore an area full of warm people with good values but hindered by poverty, drugs, and teen pregnancy.

“Directing in a variety of different formats gives me the perspective necessary to support a filmmaker when I’m producing. Similarly, production experience empowers a director — you know what kind of energy and resources results in the best work, what shows up on the screen and what doesn’t.” OSCAR BOYSON

When asked about the filmmakers that inspire him, Boyson cites the great Howard Hawks, Buster Keaton, Jacques Tati, Jacques Demy, Claire Denis, Robert Bresson and Robert Kramer. He attended Northwestern University where he was part of the student-run Block Cinema. His upcoming projects include the new Safdie feature, a short musical, and a documentary on the future of cities.