Doomed Love a film by Andrew Horn. 1984, USA, 74 min. With Bill Rice, Rosemary Moore and Allen Frame. A true lost classic of the 1980s New York underground, and a marvel of visual ingenuity. 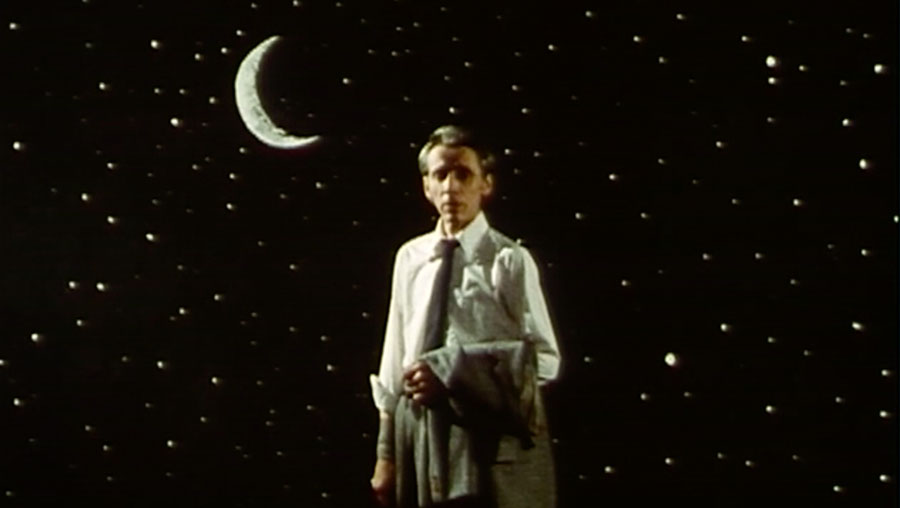 As we head into the new year, Le Cinéma Club now screens a very special film with the theme of “eternal return”: Andrew Horn’s 1984 feature Doomed Love. A would-be romance of ideas, of thoughtful gestures and kind words, a semi-musical with few songs but a cadence all its own, and a continuous marvel of visual ingenuity, the film is a true lost classic of New York independent cinema. Selected for the Berlinale’s Forum section in 1984, it travelled widely in independent and underground cinema clubs upon its initial release, but has screened only rarely since the ’80s. We are immensely proud to present it now as an online premiere, for an extended run of two weeks. At the start, we are introduced to Andre (cult actor Bill Rice), a professor of romantic literature who is slowly surrendering to grief. When he meets psychiatric nurse Lois (Rosemary Moore), and then her new husband Bob (photographer Allen Frame), the inexplicable occurs: life seems like it can begin to go on again. An irresolvable romantic triangle forms, irresolvable precisely because of the unselfish and uncanny love these characters find they have for one another. This star-crossed universe is adjacent to the No Wave cut-ups of Amos Poe or Eric Mitchell and the minimalist expressionism of Robert Wilson, but Horn and his remarkable assemblage of collaborators end up crafting a work altogether singular in its delicately melancholic tone, catching humor and sensory immediacy. Legendary downtown playwright Jim Neu plays a small role and provides looping, hypnotic dialogue; artists Amy Sillman and Pamela Wilson’s hand-paint the bizarrely evocative monochromatic sets, assembled in the studio of New York’s Millennium Film Workshop. Interspersed throughout are songs by Lenny Pickett and a score by Lounge Lizard Evan Lurie (with an assist from his brother, John Lurie), activating Horn and cinematographer’s Carl Teitelbaum’s iconographic but tactile compositions.

Andrew Horn is a filmmaker and graphic artist whose work has also extended into film criticism and dance. In his early career in New York he was a member of the legendary theater group Byrd Hoffman’s School of Byrds, and his first film works include Elaine: A Story of Lost Love  (1978). His The Big Blue (1988) reconvened much of the cast and crew of Doomed Love and also screened in the Forum section of the Berlinale. He is the director of two acclaimed music documentaries, The Nomi Song (2004) and We Are Twisted Fucking Sister! (2014) and a producer and writer of a documentary on East German musicals (East Side Story). He now lives and works in Berlin, and was recently the subject of a partial retrospective at New York’s Spectacle theater.