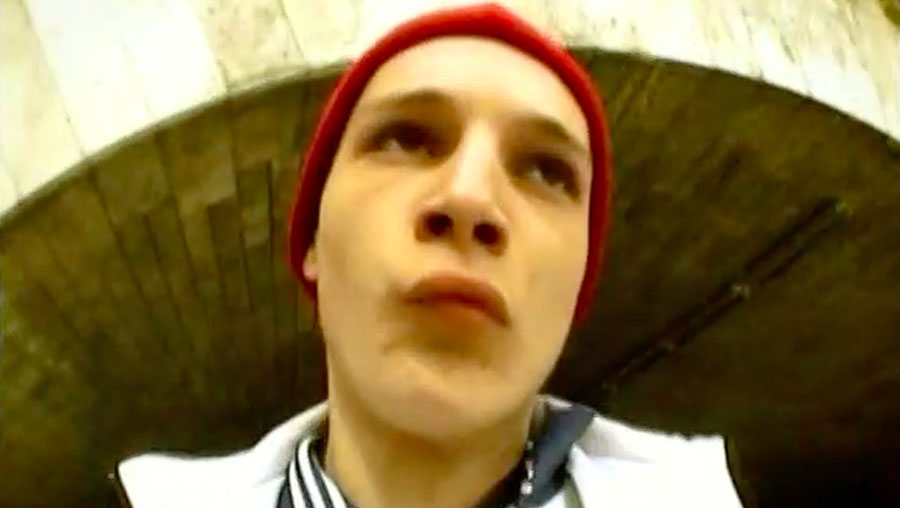 This week, we’re presenting Easy Pizza Riderz, a very cool early short by French filmmaker Romain Gavras produced with his highly influential DIY collective Kourtrajmé, a group of friends who wanted to shoot as much and as freely as they could in the late ’90s and early 2000s. Gavras’ wonderful sophomore feature, The World Is Yours – a great pop heist comedy that takes place between the French suburbs and Benidorm in Spain, with exciting performances from Isabel Adjani and Vincent Cassel, and new talents Karim Leklou and Oulaya Amanra – opens August 15th in France. The film premiered this year at the Directors’ Fortnight in Cannes, and features beautiful cinematography by André Chemetoff, along with a perfect soundtrack mixing rap and classic French songs with an original score by Jamie XX.

In Easy Pizza Riderz, an urban spoof western where people would kill for a pair of silver Reeboks, the beloved French youth culture of the time is on full display: sneakers, pizza delivery, fish-eye lenses, funk music. Shot when Gavras was only 21 years old with a modest video camera, the short announces his unique talent for crafting imaginative, stylish, thrilling film sequences and for capturing era-defining moments.

“I was barely 20 when I did that short. It was a time when a friend working in a pizza delivery shop, and another friend owning a rifle and Mexican hats was enough to shoot a little film. The chase scene with scooters was probably the stupidest thing we did. Middle of Paris, no helmets, no permission, and a live working real rifle… Those were delicious times. Now I’m sad when I don’t get 5 helicopters.” ROMAIN GAVRAS

Gavras co-founded Kourtrajmé in 1994 with French filmmaker Kim Chapiron (Sheitan, Dogpound) when the two were only teenagers. Kourtrajmé is the inverse (French slang) of  “court-métrage,” which means short film. Their aim was to shoot raw, funny films quickly with their friends, without becoming preoccupied with any intellectual or moral meaning: “I swear not to give any sense to my films, but to make films for the senses,” declares their manifesto.

Kourtrajmé made dozens of shorts and music videos, including Tarubi, l’arabe strait 2 (2001), the video for “(Je n’arrive pas à) Danser” by French rap group TTC (led by Tekilatex, who stars in Easy Pizza Riderz), and Ladj Ly’s short documentary on the 2005 riots 365 jours à Clichy-Montfermeil (2005). The team and group of friends also included Matthieu Kassovitz (who had just made La Haine), French rapper Oxmo Puccino, French TV host and journalist Mouloud Achour and Vincent Cassel, who can be found in most of their shorts (Les Frères wanted II: La Barbichette).

Romain Gavras quickly rose to fame as a visionary music video director, providing incredible, highly original, sometimes controversial imagery for Justice’s Stress, M.I.A.’s “Born Free” and “Bad Girls”, Jay-Z and Kanye West’s “No Church for the Wild”, or Jamie XX’s “Gosh”. Gavras, the son of Greek filmmaker Costa Gavras, made his debut feature Our Day Will Come in 2010 and with The World is Yours confirms that he is one of France’s most exciting filmmakers.