Four Boys in a Volvo a film by Gus Van Sant. 1996, USA, 4 min. Young men on the open road in this brief but enthralling short from a master director. 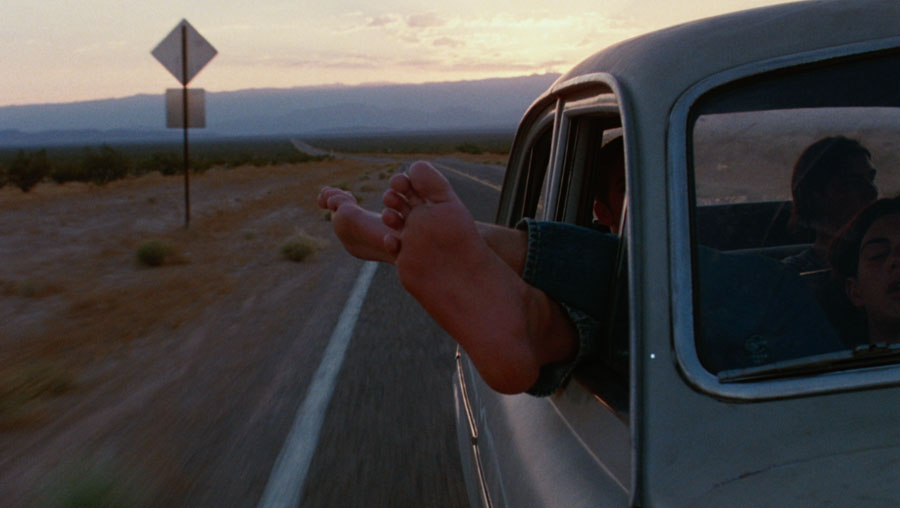 To mark the U.S. release of Gus Van Sant’s splendid latest feature Don’t Worry, He Won’t Get Far on Foot, Le Cinéma Club is thrilled to present this week Four Boys in a Volvo, a beautiful and rarely seen short film directed by the great American filmmaker, in a restored version from the Academy Film Archive. In a couple of minutes and sequences, Gus Van Sant kidnaps our eyes, bringing us along the journey of four teens driving on the open road through an American desert landscape. The short film was made from material shot for a Levi’s commercial on which Gus Van Sant was given complete freedom. Van Sant delivered the ad, and separately made his own short film; one that feels complete in and unto itself. The stunning, natural-lit frames are the result of what might be the filmmaker’s first collaboration with his long-time collaborator, the much revered, and sadly passed, cinematographer Harris Savides. The pair later worked together on all of Van Sant’s features from Gerry (2002) to Restless (2011). In Four Boys in a Volvo, repeating images of a car driving through a desert road remind us of Van Sant’s later films Gerry or Last Days (2005). This elliptical film conveys one of the filmmaker’s most beloved themes; a portrait of youth in search of meaning and escape.

Gus Van Sant’s latest feature Don’t Worry, He Won’t Get Far on Foot is a moving and uplifting film based on the memoir of the same title by artist and cartoonist John Callahan – with wonderful performances by Joaquim Phoenix, Jonah Hill, Jack Black, Rooney Mara, Kim Gordon, Udo Kier and Beth Ditto.

Le Cinéma Club would like to thank Gus Van Sant and the Academy Film Archive for making Four Boys in a Volvo available on the site.