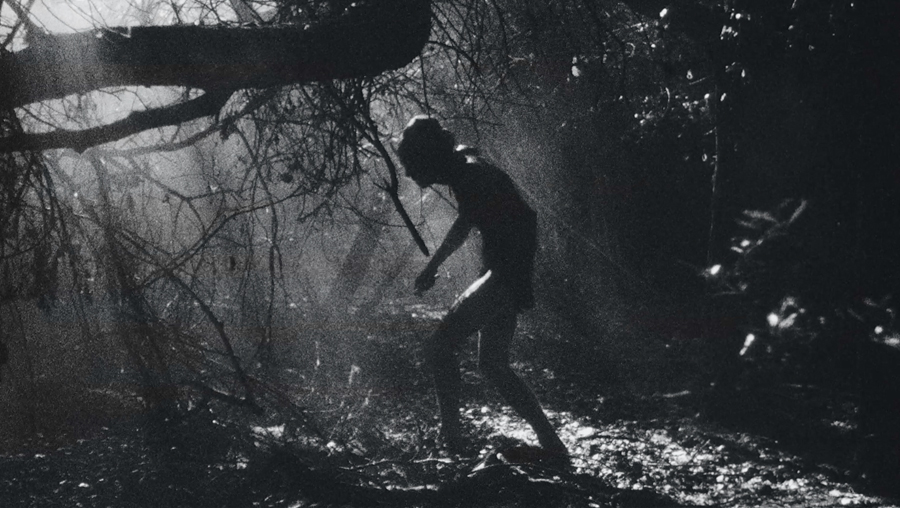 Some films are born from an article, some from a book, others from just an image – the origin of this film was the atmospheric, screeching sound of someone yelling. Director Eddie Alcazar and musician Flying Lotus had been talking about collaborating on an upcoming project, a feature by Alcazar that Flying Lotus would score, when they decided to make a short film as a way to explore working together more quickly. Fuckkkyouuu was made over a few months. The process was organic, but unconventional. Alcazar would shoot, review his footage, and edit what he had. Inspired, in search of further themes and images, he would go shoot more – always creating something new. “It was a creative process that felt right as it was driven by instinct.” EDDIE ALCAZAR

The result is a hypnotizing and chilling film about time travel, gender and identity. It was shot on Super 16mm Black and White Reversal film — a format that Alcazar wanted to work with because of its starkness and the emotional effect the filmmaker felt it would bring to his horror-related project. The film is reminiscent of F. W. Murnau’s Nosferatu (1922) – an inspiration for the score that Flying Lotus mentions alongside David Lynch’s Eraserhead (1977) and Shinya Tsukamoto’s Tetsuo: The Iron Man (1989).

The story of Fuckkkyouuu is mysterious, but nonetheless captivating – a vision of time travel as an abstract, inward-looking, intimate experience of memory. Alcazar describes his film: “With the ability to travel in time, a lonely girl finds love and comfort by connecting with her past self. Eventually faced with rejection she struggles with her identity and gender, and as time folds onto itself only one of them can remain.”

A selection at Sundance Film Festival in the Midnight shorts program, Fuckkkyouuu was one of the highlights of the festival –eerie, captivating and powerful. Eddie Alcazar is a Los Angeles-based filmmaker. He directed the HBO documentary Tapia, the music video for Adele’s “Someone Like You” and commercials for brands such as Everlast and Versace.