Happy-End a film by Peter Tscherkassky. 1996, Austria, 11 min. Comical and melancholic found footage moves back through fifteen years of Christmas. 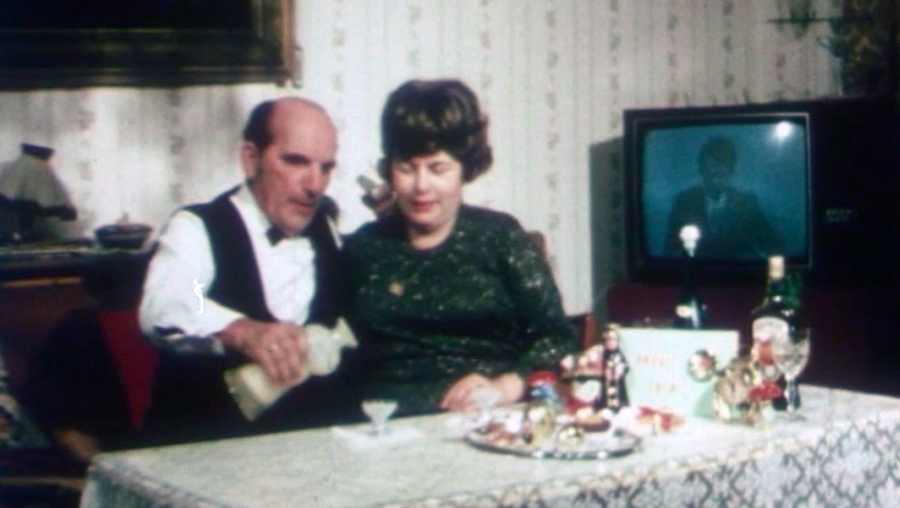 Here is the third film in the “Gee Whiz It’s Christmas” series, curated by Jake Perlin, Artistic and Programming Director of Metrograph – the Lower East Side movie theatre that has, since its opening in March, become the new essential destination for New York’s cinephile and film community. Happy-End is a film by Austrian avant-garde filmmaker and found footage master Peter Tscherkassky. He started making films in 1979 and earned his PhD in philosophy with a dissertation entitled “Film as Art.” His films have been honored with more than 50 awards including Best Short Film – for Coming Attractions (2010) – at the Venice Film Festival, and his installations have been exhibited all over the world including at the Louvre in Paris.

Peter Tscherkassky describes his film for us:

“Happy-End was part of the celebration of the centennial of cinema, as a contribution to a 90-minute found footage film reel with works by eight specialists in the field. The material is the (presumably complete) film legacy of an anonymous (and obviously childless) couple. Elfriede and Rudolf filmed themselves not only on holiday by the sea and in the mountains, but also exchanging Christmas presents, celebrating parties with friends and eating and drinking at home by themselves, just the two of them – or rather the three of them, since it was taken for granted that the camera was included. The most recent shots were dated 1980, the oldest were from the early 1960s. I wanted to give the two of them a proper resurrection and arranged the material in reverse (in terms of time).

In the course of the film Elfriede and Rudolf thus not only become younger and younger, but this also takes us back to the ‘time before the tripod’, when there was not yet a remote control cable to operate the camera, and Rudolf and Elfriede alternately captured one another on film with a hand-held camera, sipping eggnog and enjoying cream cakes. They even indulged in pralines before sex (which made a slight, very reserved, almost invisible appearance in Happy-End). Following the introduction, which still belonged to the calm tripod shots, the hand-held shots were interwoven using double projection: a rush of images accompanying the blissful ecstasy of the two actors, all the way to the finale, an exuberant dance by Elfriede leading into a freeze frame of her face, its expression conveying both joy and deep pain at the same time.” PETER TSCHERKASSKY