I’m Carolyn Parker: The Good, the Mad and the Beautiful a film by Jonathan Demme. 2011, USA, 91 min. Resilience and community in the wake of Katrina, from a great American humanist. 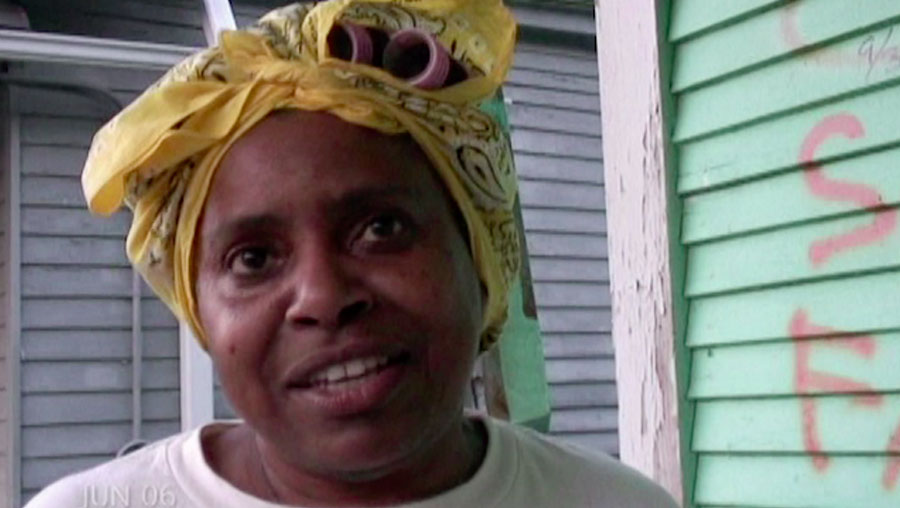 This week, we’re proud to present one of the lesser-known films by the late, great filmmaker Jonathan Demme. I’m Carolyn Parker: The Good, the Mad and the Beautiful is a portrait documentary about the inspiring, resilient Carolyn Parker – a woman in her 60s who was the last to leave her neighborhood when Hurricane Katrina approached New Orleans, and the first to return to her devastated community. Jonathan Demme, along with his producer Daniel Wolfe, followed her over a period of five years, as she was determined to rebuild her house, her church and community. “Carolyn Parker is an exceptionally inspirational figure…  I feel like this film is part of the solution, because Carolyn sure is,” said Demme.

“We all know that the media goes away after the big devastation is over. I just wanted to go down and do something, so I started making seasonal visits. I didn’t really think I would get a film out of it, but the more I went, the more I became emotionally involved. You’re so impressed by all of the work being done by volunteers, and at the same time so furious about the bureaucracies.” JONATHAN DEMME

Venturing down to New Orleans to document the aftermath of Hurricane Katrina, Demme and Wolfe went to meet a community of people who refused to evacuate their area (the Lower Ninth Ward), which was scheduled to be razed. Upon their first meeting with Carolyn Parker, they were instantly drawn to her marvelous personality and tenacity, and quickly decided she had to be the leading voice of their film. They would come back every few months, and each time, she would keep revealing more about her life and current struggle, with an inspiring optimism.

“She is such a great storyteller – I had a sense that Carolyn knew the story that she wanted to tell, she knew what was important to share with the cameras,” Demme explained in a PBS interview. Carolyn Parker not only became the extraordinary subject to depict the post-Katrina crushing consequences but she also “personified a whole segment of American history”; she had grown up as a child in the segregated South and as a teenager was an active participant during the civil rights movement.

Jonathan Demme, who sadly passed away almost a year ago, was the Academy Award-winning director of acclaimed features such as Melvin and Howard (1980), Something Wild (1986), Silence of the Lambs (1991), Philadelphia (1993) and Rachel Getting Married (2008). Demme also directed performance films such as the beloved Stop Making Sense (1984), immortalizing the live performance of the Talking Heads. Demme directed many other films, including a series of documentaries, all demonstrating his understanding of humanity and his true social and political conscience.