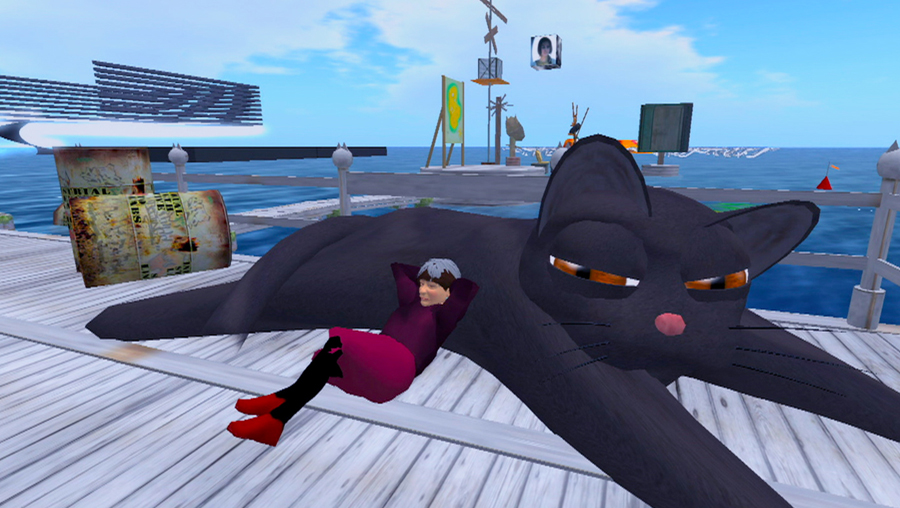 Le Cinéma Club presents In Chris Marker’s Studio by Agnès Varda, a rare and beautiful moment in cinema where two friends — who happen to be pioneering, legendary filmmakers from the French New Wave — meet in real life and in a virtual world. In the film, which was shot at two points between 2009-2011, Agnès Varda visits Chris Marker in his studio, a few years before his passing. She admires his magnificent mess, snooping around for details that reveal “the hidden side of Marker’s work”: a labyrinth of wires and computer equipment, a collection of images, magazines and books, and — of course — cats. The film takes on a wonderful surrealist turn when Varda creates an avatar to meet Marker’s avatar in the online virtual world of Second Life.

We are showing this rare short on the occasion of the last days of Varda’s beautiful first New York solo show at the Blum & Poe gallery. The show comprises works from 1949 to the present, from Varda’s early work as a photographer, to her career as a radical and poetic filmmaker, to the present where she now describes herself as “a young visual artist.” The show starts with her first photography exhibition, a series of stunning silver prints mounted on hardboard that she had organized in 1954 at her home in Paris — where she lived with her husband Jacques Demy — and it ends with her recent art installations, such as the great Bord de Mer (2009), in which Varda brings the viewer, as if by magic, to the seaside.

Chris Marker was an enigmatic person and artist who would rather have his work speak for itself. Camera shy, he created a larger-than-life cardboard cat named Guillaume to hide behind. Varda and Marker met in 1954, as Marker was a friend of Alain Resnais, who at the time was editing Varda’s first feature La Pointe Courte. It was because they knew each other for so long that Marker allowed Varda to enter his private workspace with her camera.

In the film, Marker remains shy and unsure about Varda’s idea of shooting his studio: “Why are you filming my mess? You are going to dishonor me.” To which Varda replies, with her usual enthusiasm: “I find it beautiful that one is surrounded by what he does!” It is wonderful to see the workplace of great minds. We do not see Marker, but we hear his voice — and what a treat it is to hear him, speaking of how he hates waiting in lines, and how happy he is to be able to read a poem by Apollinaire while doing so, because he has poetry saved on his phone. Varda’s camera follows her eye, jumping from one detail to another, discovering a new treasure in every corner. We feel as if we are right by her shoulder.

“His intelligence, toughness and tenderness have been one of my joys throughout our long friendship.” AGNÈS VARDA

Agnès Varda is the only female director generally associated with the Nouvelle Vague, and the only woman thus far to receive an honorary Palme d’or. She is a feminine and feminist pioneer, an artist who would argue that making films wasn’t difficult because of her gender but rather because of the radical nature of her movies. Varda is an unstoppable force: her infinite curiosity and energy, still strong at 88, has driven her to create works that always feels sincere, generous and free-spirited, from Cléo from 5 to 7 (1962) to her installation Patatutopia (2003), presented at the Venice Biennale. A.O. Scott describes Varda perfectly in his New York Times review of The Beaches of Agnès (2009): “[Agnès Varda has] a kind of thrifty, skeptical anarchism of the spirit, a liberating willingness to find inspiration and even beauty in what might conventionally be dismissed as rough, ugly or commonplace.”

Credits for
IN CHRIS MARKER'S STUDIO