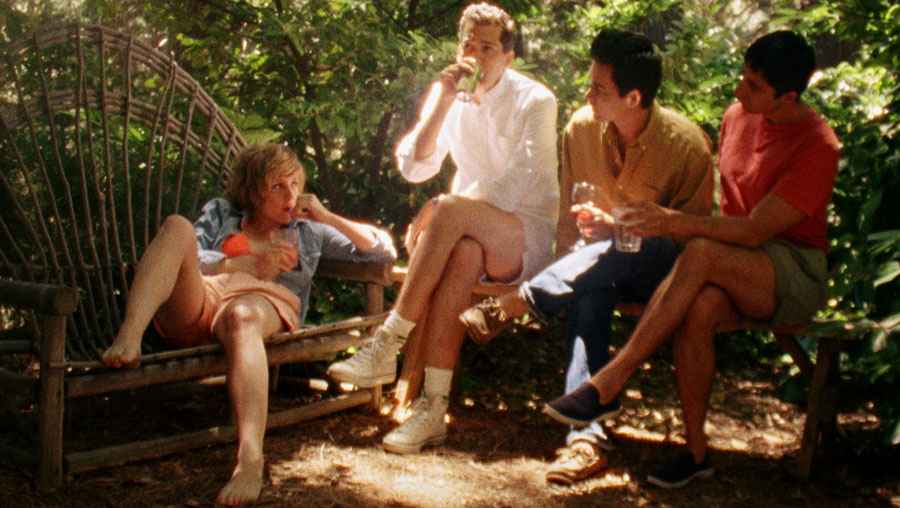 Our spotlight on Brooklyn’s BAMcinemaFest continues with a special presentation of Lev Kalman and Whitney Horn’s sun-kissed L for Leisure. A U.S. premiere at the festival in 2014, this mischievous study of vacationing American academics finds its sprawling ensemble of characters popping up across the country and around the world over the course of 1992 and 1993, their hair down, mood mellow and Snapples close at hand. It is at once a nostalgic, freely imagined snapshot of a past that perhaps never was, and a psychedelic speculation about futures yet to come. Le Cinéma Club screens the feature to celebrate Kalman and Horn’s return to BAMcinemaFest on June 28th with the world premiere of their supernatural western Two Plains & a Fancy. L for Leisure is the weirdly cohesive result of four years of production and a precarious, fragmented shooting schedule. The non-professional cast was drawn from friends and acquaintances, including filmmakers Benjamin Crotty and Mati Diop (whose work has previously screened on Le Cinéma Club). Horn doubles as the film’s cinematographer and fills her 16 mm, 4:3 frames with fascinating architectural details and bold, richly colored swathes of sea and sky, blissfully rhyming with the lush synths and samples of John Atkinson’s score. If Whit Stillman’s Barcelona (1994) and Andy Warhol’s My Hustler (1965) were to go on an ayahuasca retreat, meet on a higher plane of spiritual/cinematic existence, and fuse their consciousnesses, chances are they’d return as L for Leisure.

“The distance between history and present-tense, and what the passage of time means, is an ongoing project of ours. But L for Leisure was a sustained moment of our considering the middle distance – a past that is still accessible to us through memories, and directly through all sorts of everyday artifacts, but still feels somehow irretrievable.” WHITNEY HORN & LEV KALMAN

Lev Kalman and Whitney Horn grew up in the suburbs of New York. They began their 15-year collaboration while students at Columbia University, embarking on a series of shorts with which they developed their signature style. Kalman is currently based in San Diego and Horn in San Francisco. Their debut feature, 2014’s L for Leisure, had its world-premiere at Rotterdam, its US premiere at BAMcinemaFest, was called “brazenly original” by Filmmaker Magazine, and “some mysterious alchemy of deep irony and deeper beauty” by BOMB magazine. We are excited to discover their “Spa Western” Two Plains & a Fancy at BAMcinemaFest, and a new serialized project entitled Dream Team, currently in development.