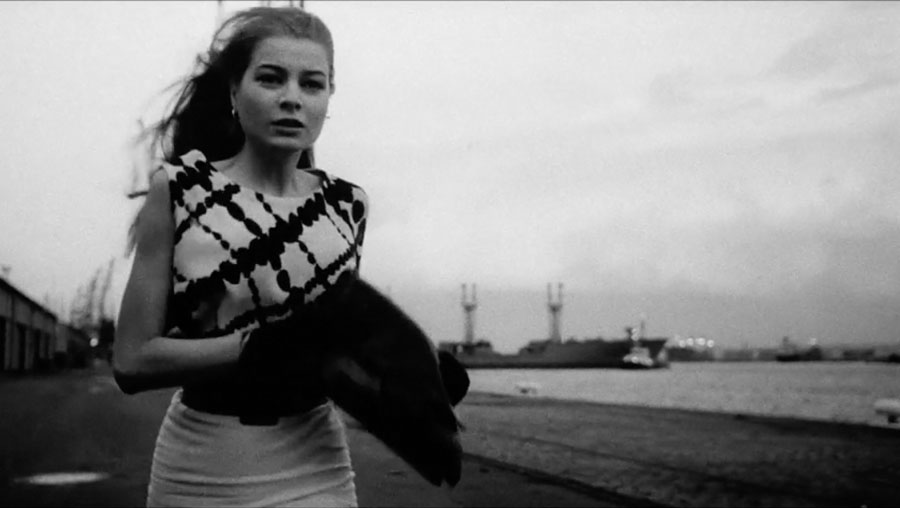 We’re excited to be hosting an Olivier Assayas double bill, beginning this week with Assayas’ early short Laissé inachevé à Tokyo, screening on Le Cinéma Club in a new restoration. The series continues next week with the 2017 documentary Aware, Anywhere (part of the cult French series Cinéma, de notre temps), which sees Assayas discussing thirty years of filmmaking, shot when he was presenting Personal Shopper at the New York Film Festival. The program will also include a list of five films the director loves, with his commentary on each. Assayas shot Laissé inachevé à Tokyo in 1982, when he was working as a journalist at Cahiers du cinéma. With graphic, stylized frames and a peculiar narrative structure blending elements of film noir, the short tells the mysterious journey of a young woman who travels to Japan to write an adventure novel and gets drawn into an espionage plot. The eclectic cast features Assayas’ longtime friend, the singer Elli Medeiros (from synthpop band Elli & Jacno), László Szabó (known for his various roles in French New Wave films), singer and actress Arielle Dombasle and actor-director Pascal Aubier. We were honored to receive Assayas’ personal commentary on this early short:

“I’ve always considered Laissé inachevé à Tokyo as a kind of film-school short. I mean these films that one makes to get rid of bad ideas before confronting the real questions of cinema. It’s the film of a cinephile as you can clearly see, in that my references are drawn from the classic Hollywood era, from its iconic imagery. I strangely made in my early days a postmodern film when we didn’t think yet in those terms. But when we started to, I automatically rejected them. The end result is that I’ve kept a certain guilt towards my actors who trusted me, because I didn’t know how to direct and was imposing on them abstract, lifeless dialogue.

Laissé inachevé à Tokyo has nevertheless been an important film for me. I got to work for the first time with Denis Lenoir, who became the cinematographer for all of my early features, and with Luc Barnier, who edited them. Elli Medeiros was the superstar – in a Warholian way – of all of my short films and she is still one of my best friends. And because it’s a short film that people have loved,  and it won awards, and also because, artistically speaking, I had a lot of fun making it. It’s the film of a graphic designer, of a visual artist if you want to be generous, influenced by the post-punk style of the times – Bazooka, for example – more than it’s a draft of my films to come. Yet, when I wrote Désordre, my first feature, it is thanks to this “successful stylistic exercise” that I was able to gain the trust of my producers and his partners. Hence I should appreciate it more.” OLIVIER ASSAYAS

Laissé inachevé à Tokyo was shot entirely in France. The crew staged the Tokyo decors between an abandoned warehouse in Paris and on docks in Normandy. It was financed thanks to a grant from the French government, which Assayas had finally obtained after applying multiple times.

While the short reflects the taste of a fervent cinephile referencing the classic film noirs, and the graphic eye of a recent visual arts graduate, it at least suggests some precursors that will be found again in some of Assayas’ future and important films, such as stories set between Europe and Asia and stories lead by a sensual and enigmatic feminine lead.

One of the most distinguished, prolific and international French filmmakers today, Olivier Assayas began his career in the early 1980s after studying at the École nationale supérieure des beaux-arts de Paris. Laissé inachevé à Tokyo was his first entry into the Cannes Film Festival in 1983. His first feature Désordre was released in 1986, and from there, his work was quickly acclaimed, with important successes such as Cold Water (1994), Irma Vep (1996), Clean (2004), Carlos (2010) and most recently Clouds of Sils Maria (2014). In 2016, he was awarded the Best Director Prize at Cannes for Personal Shopper. Assayas’ latest feature Non-Fiction, starring Juliette Binoche and Guillaume Canet, had its world premiere at the Venice Film Festival in August and will be screening at the New York Film Festival 2018. He is currently prepping his next feature, Wasp Network, a spy drama based on Fernando Morais’ book The Last Soldier of the Cold War, following the story of Cuban spies infiltrating an anti-Castro military group in the U.S. during the 1990s.