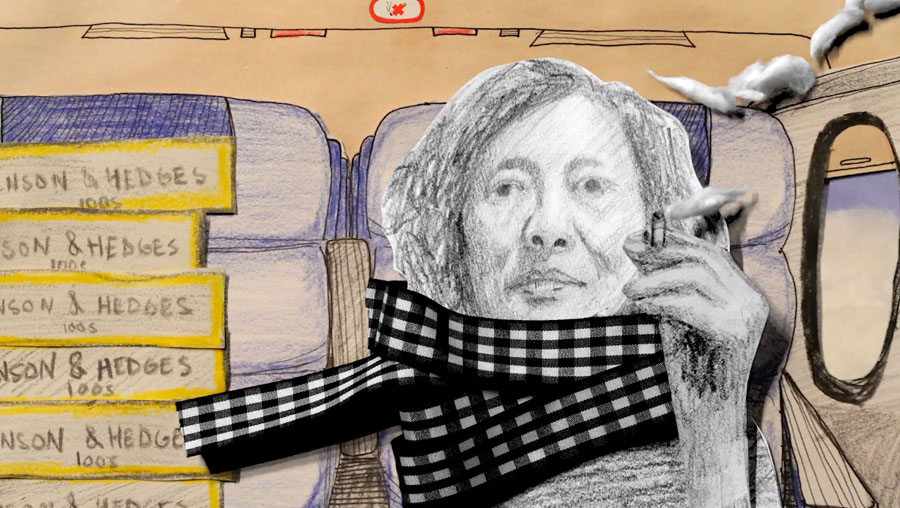 We present this week, exclusively, a short animation directed by two young talents of New York: Lewie and Noah Kloster. Legal Smuggling with Christine Choy is their first official collaboration; the film was presented at the New York Film Festival in 2016, before being selected at many other festivals. It is also the first in a series they are producing, in which each episode focuses on an artist and reveals his or her personality through an anecdote. Self-taught animators who grew up in Minnesota, the Kloster brothers introduce us to a singular world built with four hands.

While the price of cigarettes becomes exorbitant in New York, Christine Choy, an Oscar-nominated documentary filmmaker, crosses borders to find her favorite brand…

The project was born from the admiration that Lewie had for his teacher Christine Choy at NYU, and for all the wacky stories she told in class. After getting permission to tell this story, Lewie suggested to his little brother Noah to try to make an animation of it. Since the age of five, both had fun shooting with cameras. Lewie, who at the time was studying editing, wanted to apply Noah’s visual arts skills, who had finished high school with the idea of turning to painting. “It started out slow. A whole summer to make a 4-minute short? It was our first ever animation so we made sure to break out of the studio for coffee and bike-ride breaks. That really laid the groundwork for the attention-deficit driven – yet relaxed – attitude our animations have.” LEWIE & NOAH KLOSTER

The two brothers learned to animate by making this film, and since then form a duet of animators. They have already made three more episodes of their Legal Smuggling series, which they want to sell and release soon, and then continue to develop it with other dreamers in mind.

Lewie is now widely known for NYU Tisch Film School, while Noah has just joined him in New York and is studying at Pratt Institute. The duo has already made several commissions for customers such as Red Bull, Vice, Samsung and the Film Society of Lincoln Center. Asked about their influences, the two brothers answer that they identify themselves mainly with artists and musicians whose attitude towards their practice is the one they are adopted too. They evoke their current obsession with the proto-punk movement, punk music, David Byrne, Jim Jarmusch, Tom Waits and Björk. Noah says amusedly, “We think of ourselves as punk animators because the punk attitude is also to do it yourself and in its own way.”

To follow their work you can go to the website of the production company they have just founded; Tall Glass with Ice Productions.