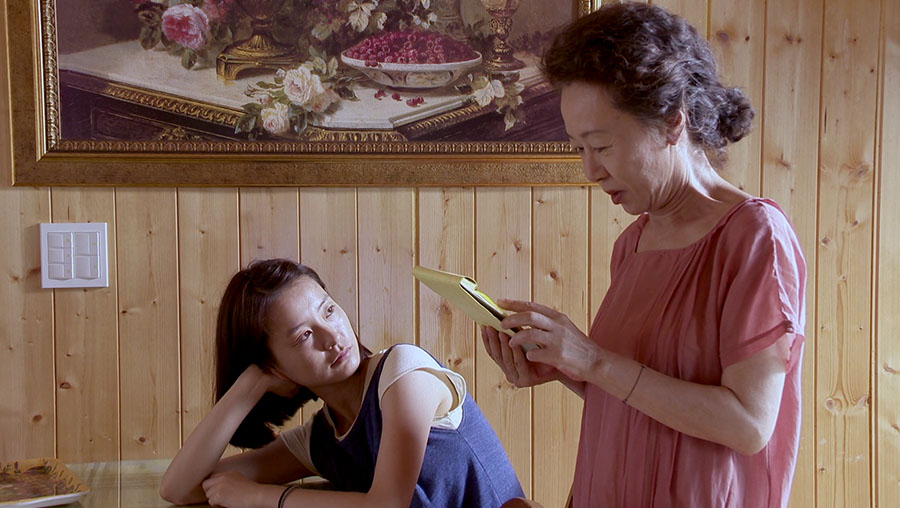 This week, Le Cinéma Club is proud to be hosting the online premiere of List, a rarely screened short by one of our great contemporary directors, the mischievous, protean and dazzlingly original Korean auteur Hong Sang-soo. Over a slice of chocolate cake, a mother (Yuh Jung-youn) and daughter (Jung Yu-mi) tensely discuss the good-for-nothing relative whose money troubles have brought them to the seaside town of Mohang. For now they have nothing to do but wait, so the younger woman, Mihye, composes a list of goals for her involuntary vacation – a list which she seems to fulfill almost accidentally, as she and her mother wander, eat, drink, and meet with fate, here in the form of a clumsily flirtatious film director (Yoo Joon-sang). If this premise sounds familiar, it’s because List’s repetitions and mirrorings reflect past its own frame, extending to Hong’s 2012 feature In Another Country. The longer film begins in the exact same moment, with Minhe and her mother stranded in Mohang, before branching out into a series of three explicitly fictional narratives starring Isabelle Huppert that each echo an unseen exterior reality in contradictory ways. List’s refraction of this is one of Hong’s most effortlessly radical formal gestures, an affirmation of pure narrative possibility as absurdly funny as it is profound.

We asked the director how this unique and fortuitous production came to be. He explained:

Hong Sang-soo is one of world cinema’s most fiendish and prolific imaginations, an inventor of impossible structures and an increasingly acute observer of the human heart. His debut feature, 1996’s The Day a Pig Fell into the Well, was immediately heralded as a landmark in Korean independent and art cinema. In Another Country played in competition at Cannes in 2012 and inaugurated a cycle of films largely in English and often starring French actress Isabelle Huppert. In 2015, his Right Now, Wrong Then won Locarno’s Golden Leopard, as well as Best Actor for Jung Jae-young, and introduced a strain of spirituality that now seems inseparable from his universe. We look forward to the U.S. premiere of his two most recent films Grass and Hotel by the River (for which Ki Joo-bong won Locarno’s Best Actor award) at the 2018 New York Film Festival.