Manodopera a film by Loukianos Moshonas. 2016, Greece, 30 min. The bonds of labor and the bounds of class in an electrifying short by a young Greek director. 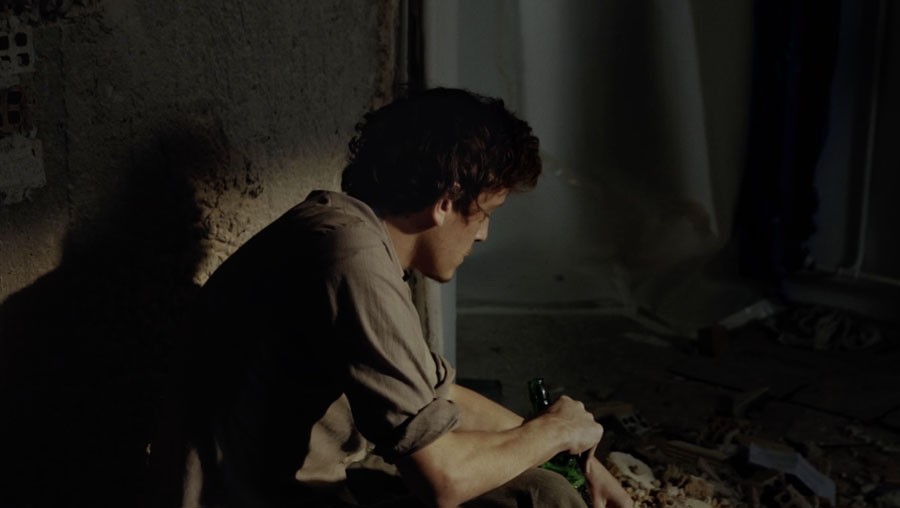 This week, we’re excited to present the streaming premiere of Manodopera, a short film by Greek-French director Loukianos Moshonas. In it, the director himself plays a young man renovating his Athens flat with the help of an assured, older Albanian neighbor (Altino Katro). By day, the two almost wordlessly go about their work – demolishing, pulverizing, and carefully rebuilding – and then the younger spends his nights on a rooftop overlooking the city, where friends gather to discourse on subjects both immediate and arcane, from the Greek state to their own supposed godhood. Premiering in the Pardi Di Domani competition at the Locarno Film Festival in 2016, Manodopera went on to play the New Directors/New Films, Athens, Anger and numerous other film festivals, and has become the basis for Moshonas’ first feature film, currently in development. The film’s non-professional actors play versions of themselves, and the events shown are simultaneously orchestrated fictions and documentary material, recording the real renovation of Moshonas’ apartment and the changing thoughts and feelings of a few intimate friends. But his direction is electrifying and attentive, always actively engaging and rooting out some greater sense of personality and identity in the quotidian incidents depicted. Carefully planned camera pans and pushes catch and hold fleeting gestures until they vibrate with strange intensity, and a profound sensitivity to space dynamicizes the staircases, windows and walls around which the characters work and lounge – even as they crumble under the blows of a hammer. Manodopera is an exhilarating film about work and thought, about how they weave in and out of one another, both in individuals and the camaraderie of a shared task or a summer night. Speaking to the film’s tensions between action and stillness, speech and silence, Moshonas notes:

“My previous work grew out of a desire to film speech as action, or a risk someone has to take. Manodopera prolongs this, while attempting to bring in speechless relationships, of smashing and building actions, that emphasize class relations.” LOUKIANOS MOSHONAS

Born in 1985 in Athens, he attended the École des Beaux-Arts in Lyon and Le Fresnoy in Lille. His shorts films have been screened and awarded in numerous festivals – New Directors/New Films in N.Y., Angers, Documenta Madrid, Janela, Olhar de Cinema, Vila do Conde, Mar de Plata – while his last two, Manodopera and Young Men at the Window, premiered at Locarno Film Festival in 2016 and 2017, where the latter won the EFA Award for Best European Short Film. Based on Manodopera, he’s preparing his first feature No God, No Master, a twisted, class-related film noir of endless demolition and renovation work, between reality and fantasy in an Athens basement flat.