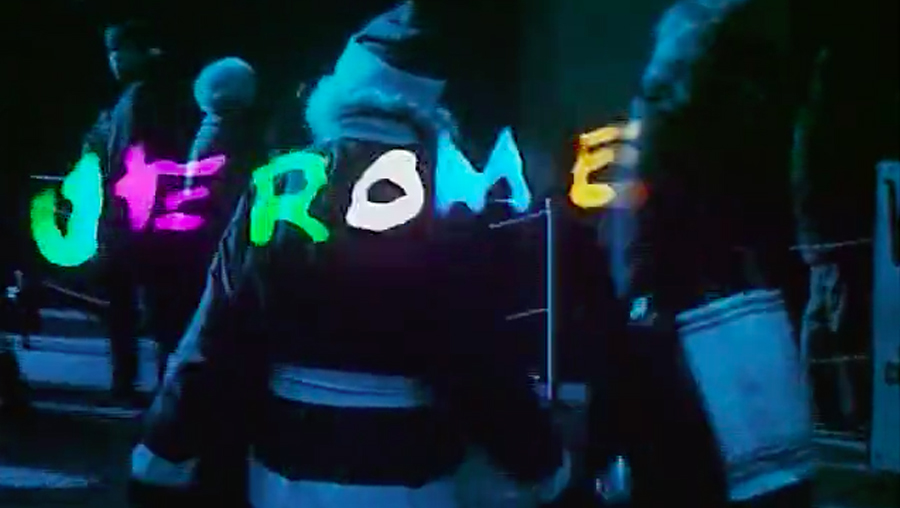 Last week’s intimate family gathering gives way to a modern experimental retelling of the journey of Mary and Joseph with Merry Christmas, a three-minute short film by American artist and filmmaker Jerome Hill. Mary and Joseph wander the streets of New York with their donkey. Seeking refuge and shelter, they are turned away at the Algonquin Hotel. They continue their journey through the busy streets of New York, ignored by passersby who remain unaware of their existence.

Made in 1969, Merry Christmas sees Hill apply his experimental painting technique on documentary-like images of the bustling New York streets during Christmastime. He hand-painted the entire short, the characters Mary, Joseph and the donkey drawn onto the film. The technique was an intensive process for the filmmaker that included drawing, painting and gluing objects directly onto the film. The resulting atmosphere is both surreal and grounded. Three ghostly figures, indefinite colored shapes, move through the day-to-day life of Times Square in the 60s near the Algonquin Hotel where Hill used to live.

“His work got younger and younger every year. His cinema began at Warner Brothers, and it ended in the lines of avant-garde film. His progress was slow and painful. He had to free himself from many society, family and commerce traditions.” JONAS MEKAS

Jerome Hill was the he grandson of railroad builder James Jerome Hill. After majoring in music at Yale, he studied painting at the British Academy in Rome and at the Academie Scandinave in Paris. After World War II, during which he served in Army film units and as a liaison officer with French forces, Hill directed a short, Grandma Moses (1950), which was nominated for an Academy Award, and a feature length documentary, Albert Schweitzer, that received an Oscar in 1957. Frustrated by the narrow confines of documentaries, Hill started experimenting with film. The director hand-colored a number of his films, including his best-known full-length autobiographical film, Film Portrait, made in 1972, and added in 2003 to the National Film Registry at the Library of Congress.

Jerome Hill was also a great philanthropist. Jonas Mekas thanks him in his tribute to the artist: “The whole movement of the American avant-garde film of the ‘60s would have taken a completely different turn, much slower and thinner, without the help of Jerome.” In 1964, Hill created the Avon Foundation, now the Jerome Foundation, to support the creation, development, and production of new works by emerging artists. All of his films can be watched for free on the Jerome Fondation’s website.