To Die By Your Side a film by Simon Cahn and Spike Jonze. 2011, France, 6 min. With Pierre Le-Tan and the voices of Spike Jonze and Soko. 3,000 pieces of hand-cut felt – a stop-motion love story set in a world-famous bookshop. 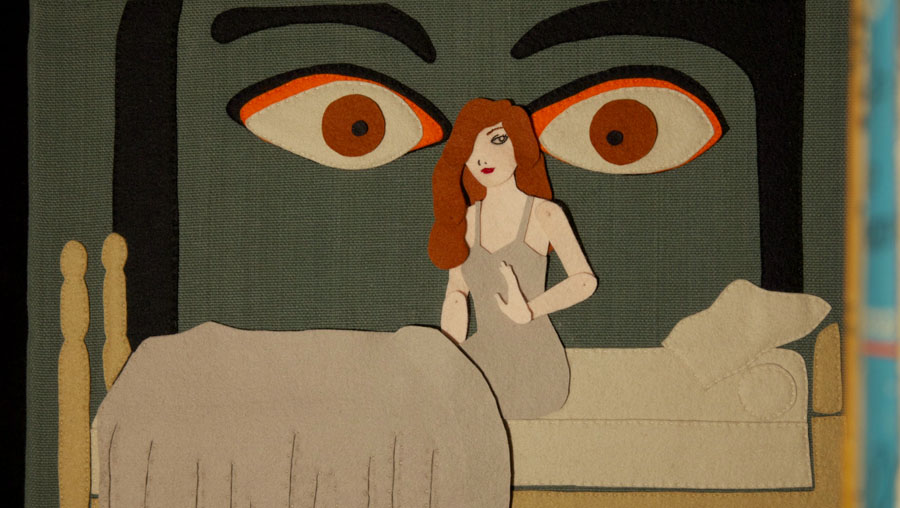 Spike Jonze had the idea for this stop-motion animated short when he saw some of the felt scraps that designer Olympia Le-Tan had in her bag to make her book clutches. They joked about making a film and went for it, appointing French filmmaker Simon Cahn to co-direct. Over 3,000 pieces of hand-cut felt at Olympia Le-Tan’s studio were animated. The story takes place after hours in the famous Parisian bookshop Shakespeare & Company, which sits by the Seine river, and is where writers from the Beat Generation used to hang out. This tragicomic, one-of-a-kind short tells the love story between two characters coming alive from the covers of books laid out on the shelves. The skeleton from the cover of Macbeth, voiced by Spike Jonze, falls for Mina Harker, the beauty on Dracula‘s book cover, voiced by French actress and musician Soko. On their way to meet, the skeleton is swallowed by Moby Dick and Harker goes out to rescue him…