MY JOSEPHINE a film by Barry Jenkins. 2003, USA, 8 min. Written in the uncertainty of the post 9/11 era, a film-school short from the director of Moonlight. 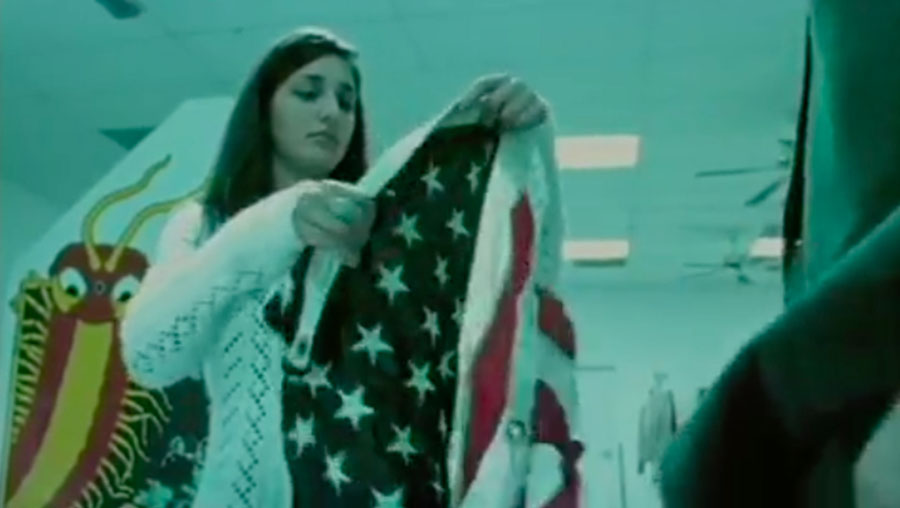 We are presenting the first short by Barry Jenkins, the acclaimed director of Moonlight. In this eight-minute student film, a young man named Aadid, working the night shift at a Florida laundromat, confesses in voiceover his love for his co-worker Adela, a woman with whom he washes American flags for free. He compares her to Napoleon’s first wife, Josephine. The short was written and directed in the uncertain times following 9/11, and it feels, in the current climate, especially moving. My Josephine remains a personal favorite for the director. In a recent tweet, Jenkins mentioned the short film as a reminder to himself to “channel this energy, to create.” The early work already demonstrates some of Jenkins’s distinctive directorial style, from the poetic and intimate voices of the characters (and the first person narration), to the formal aesthetic of his cinema. The short was made with Jenkins’ longtime cinematographer James Laxton. The two met at university and have been collaborating since. When Barry Jenkins noticed a sign in a laundromat window saying, “American Flags Cleaned Free,” the idea for the film was born.

“My first short film, photography by James Laxton, as always. Still my favorite. Written shortly after 9/11, wasn’t actually made for another year because of the way things shook out in school. Inspired by three things: the marquee of a Tallahassee laundromat shortly after 9/11 reading “American Flags Cleaned Free,” an image in my head of two people sitting atop folding tables, and my housemate at the time being obsessed with Napoleon. We were very young men when we made this film.” BARRY JENKINS

After studying film at Florida State University, Jenkins directed Medicine for Melancholy, an independent film about a 24-hour romance between two people in their twenties discussing gentrification and identity while walking through San Francisco. The film was made on a budget of $15,000 and was recognized as a breakthrough by critics. It took eight years for Barry Jenkins to make another movie: the universally praised Moonlight, which won, among many other prizes, Best Picture (Drama) at the Golden Globes. Moonlight is nominated for eight Academy Awards, including Best Picture, Best Director, and Best Adapted Screenplay.