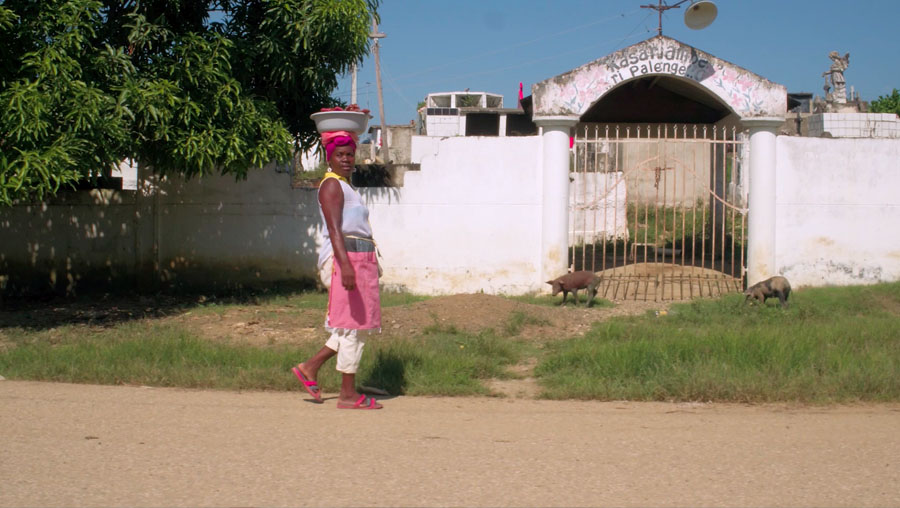 This week, we’re premiering Palenque, a musical portrait of San Basilio de Palenque: a small Colombian town who was the first one in the Americas to free itself from colonization, and that was named a UNESCO World Heritage Site in 2005. Directed by the Colombian, Chicago-based young filmmaker Sebastián Pinzón Silva, the short premiered at the Locarno Film Festival, before being screened at this year’s New Directors/New Films festival. Palenque was Pinzon’s thesis project at Northwestern University. The inspiration for its musical narrative came from the local, funerary tradition of Lumbalú, a syncretism between Catholic and Western African traditions brought by the men and women who were enslaved during colonial times. During this ritual, chants and drum beats are performed for nine days and nights to wish the souls of the dead a prompt return to their ancestral home in Africa. Pinzón Silva spent an entire summer immersing himself within the community of the town, and shot the film with a very small crew and budget.

“I had no pre-conceived plan or script before getting there. Much of my time in Palenque was spent in development of the idea. It was important for me to be there to do so within the community. I worked closely with Kuchá Suto, the local youth media collective. They introduced me to the main performers of the film. Our main premise for the actual production of the film was to find musicality in the rhythms of day-to-day life.” SEBASTIÁN PINZÓN SILVA

Sebastián Pinzón Silva is a Colombian director interested in exploring the collective conscience of his country through his films. He holds a degree in Film and Television from the Savannah College of Art and Design and an MFA in Documentary Media from Northwestern University. His work has screened at festivals including Locarno, True/False, SFFILM Fest, Cinélatino, Camden International, and at venues including the MoMA, MACBA Buenos Aires, and the Museum of the Moving Image. He is based in Chicago where he is part of the Mirror Stage Film Collective. He’s currently developing a feature project based on a short he directed for National Geographic about a community that was displaced by paramilitary forces in Colombia in 2001. The feature follows a woman who returns alone to the remains of her old village La Bonga, as she tries to convince friends and neighbors to rebuild the town.