Palü a film by Jochen Dehn & Ulrich Köhler. 1998, Germany / Switzerland, 6 min. White rabbits and black humor in the Swiss Alps, from a key voice of the new German cinema. 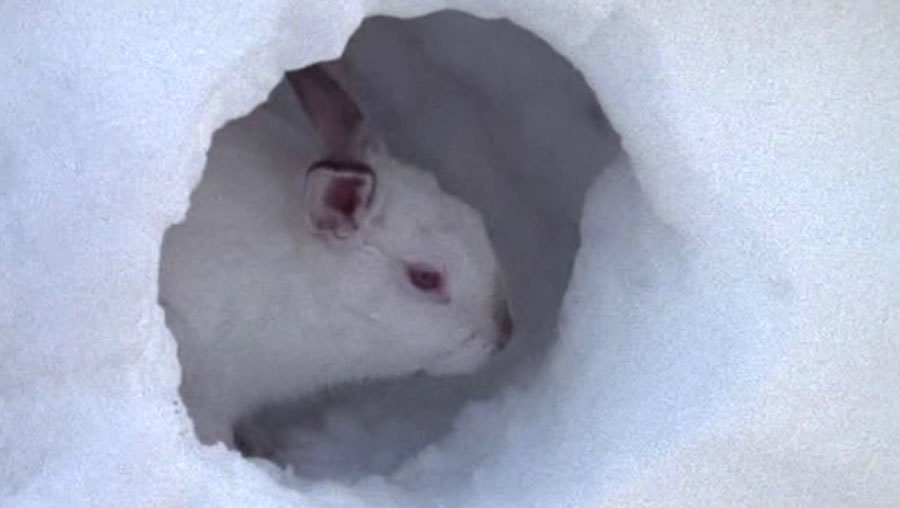 We enter the winter months with German filmmakers Ulrich Köhler and Jochen Dehn and their 1998 miniature Palü. In this blackly comic and brilliantly concise short, a man wanders at the foot of the Swiss Alps — until, like Alice, his attention is attracted by a white rabbit. The film that results has all the symmetry and precision of a snowball aimed carefully into the void, and anticipates Kohler and sometime production designer Dehn’s most recent adventure in a startling landscape, In My Room, which premiered in Un Certain Regard at Cannes 2018. Utilizing just a few constituent elements (a place, two people and an animal), six minutes and the barest wisp of a plot, Palü builds up a strangely evocative world, where secrets can be uncovered around any corner and even the most commonplace interaction hide profundities and paradoxes. That this can happen under a blue sky, with friendly smiles and good intentions, makes it all the more remarkable. This re-activation of the everyday also comes through in Dehn’s remarks to us about the project’s conception:

“We had both read a book by Arthur Danto, that starts with the description of an exhibition of a couple of red pictures but then goes on to a passage citing someone else, Lev Vygotsky, who stated that a peasant – confronted with the discovery of new distant galaxies – was not surprised that humans had been able to build these new kind of telescopes, but was amazed or wondering at how they had found out the names of these stars.” JOCHEN DEHN

Ulrich Köhler is one of the foremost figures within the so-called Berlin School, the informal network of filmmakers and collaborators with which Christian Petzold, Valeska Grisebach and Maren Ade are also often associated. His first three features all premiered at the Berlinale, where Sleeping Sickness (2011) won the Silver Bear. His most recent film In My Room is a moving pastoral riff on the post-apocalyptic genre produced by Komplizen Films (Valeska Grisebach’s Western, Sebastiàn Lelio’s A Fantastic Woman, Miguel Gomes’ Arabian Nights), the wonderful Berlin-based production company co-founded by his wife, filmmaker Maren Ade (Toni Erdmann) and Janine Jackowski.

Jochen Dehn is best-known as a contemporary artist whose work in sculpture, performance and installation playfully deconstructs common sense, and has been exhibited in numerous international institutions, including the Centre Pompidou in Paris, the Volksbühne in Berlin, the Deutsches Schauspielhaus in Hamburg and the 11th Biennial of Contemporary Art Lyon. As a production designer for film, he has worked with Maren Ade and Angela Schanelec, and several times with Köhler, most recently on In My Room.