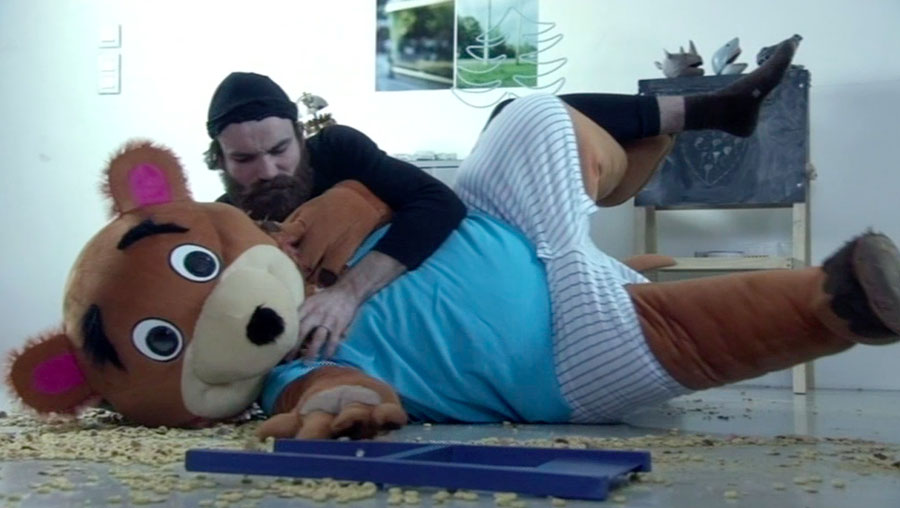 Ecce Films and Flip’s cereal presents Respect, a short film directed by Benoît Forgeard in 2010. The story focuses on a couple fighting at the breakfast table. All is well, nothing out of the ordinary. Steph announces to his life partner Flippy, the mascot bear for Flip’s cereal, that he wishes to go to Japan to fulfill his childhood’s dream: to study at a ninja school. “Walking through the cereal isle at the supermarket, I was suddenly stunned by the violence of the images. The bursting colors, the milk splashing out of the bowls. The creatures representing the brands showing hypocritical smiles. The violence is at its peak at breakfast time. I wanted to direct one of these creatures, Flippy, the rival of Frosty the Tiger, while putting him in the role of the oppressor, that his boyfriend Steph will attempt to overthrow.” BENOÎT FORGEARD

How does one explain Benoît Forgeard’s cinema to someone who has never heard of it? It is indisputably tricky since there may not be words sufficient to describe his work. Once familiar with it, even in the smallest of details, the viewer finds himself charmed by Forgeard’s unique and absurd funniness. In Respect, while it starts with a picture of Flippy the bear with former French President Jacques Chirac on the fridge’s door, it continues on to Flippy violently throwing some cereals at his partner’s face and shouting, “Not while I’m fucking eating!” just because he was lighting up a cigarette.

To attempt to explain, we could start by saying that Benoit Forgeard studied contemporary arts at Les Beaux Arts de Rouen before experimenting more at Studio National des Arts Contemporains du Fresnoy. We could also tell you a bit more about his production design. Clearly not shot in a studio, but very clearly not in a natural setting either, the environment of Benoît Forgeard’s films can be described as some sort of post IKEA world, where everything appears to be in only two dimensions, made badly, but on purpose. The other warning we might want to give you is that Benoît Forgeard’s French dialogue is exquisitely well written. Very well-directed actors often execute these dialogues to his very peculiar perfection. This is the case in Respect, as it is in his short movies and his first feature Gaz de France, which came out in 2015. The movie imagined France in 2020 with a President called Bird going through some really tough scores in the polls. Let yourself go and you may die of laughter.