Share a film by Pippa Branco. 2015, USA, 13 min. With Taissa Farmiga. Teenage sexuality and surviving the internet in a SXSW-winning short. 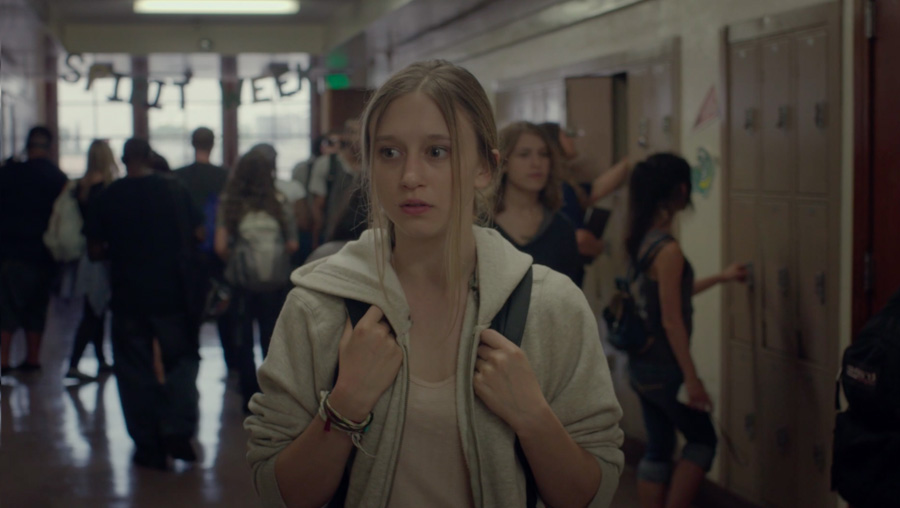 Share is the debut short film from rising talent Pippa Bianco. Written and directed by Bianco, Share takes a sophisticated cinematic approach to a modern subject – teenage sex and the Internet – with sensitive long takes, a beautiful, striking ending and an exciting turn from young actress Taissa Farmiga. Share premiered at SXSW, where it won the Special Jury Recognition Award for Narrative Short. The film won the first prize Cinéfondation Award at Cannes, where Abderrahmane Sissako (Timbuktu) was President of the jury. It was the only American short screened at the festival. The film follows 15-year-old Krystal (Taissa Farmiga) returning to school after a sexually explicit video of her spreads online.

“I feel that it’s important for a story to work on a cultural or political level, but you don’t want to make issue films. You don’t want it to feel like a morality lecture. It should feel like cinema and art.” PIPPA BIANCO

The inspiration for the story came from a confluence of different events during Bianco’s college years. Bianco, who studied photography at Yale, was volunteering for a sexual assault hotline around the time of many Title IX cases and campus rape issues. Around the same time, Bianco was shocked when a male friend of hers released a sexually explicit video — similar to the video in Share — without his partner’s permission. She imagined a female character victim of this situation.

When asked about her references for the short, Bianco cites the work of Michael Haneke, Lynne Ramsay, Justin Kurzel, the Dardenne Brothers and Alicia Duffy’s short The Most Beautiful Man in the World. She also directed a short documentary about the contemporary artist Barbara Kruger, and is currently developing a feature based on Share.