Silk Tatters a film by Gina Telaroli. 2015, USA, 17 min. A sensual experimental montage by a compulsive, perceptive observer of cinema and the world. 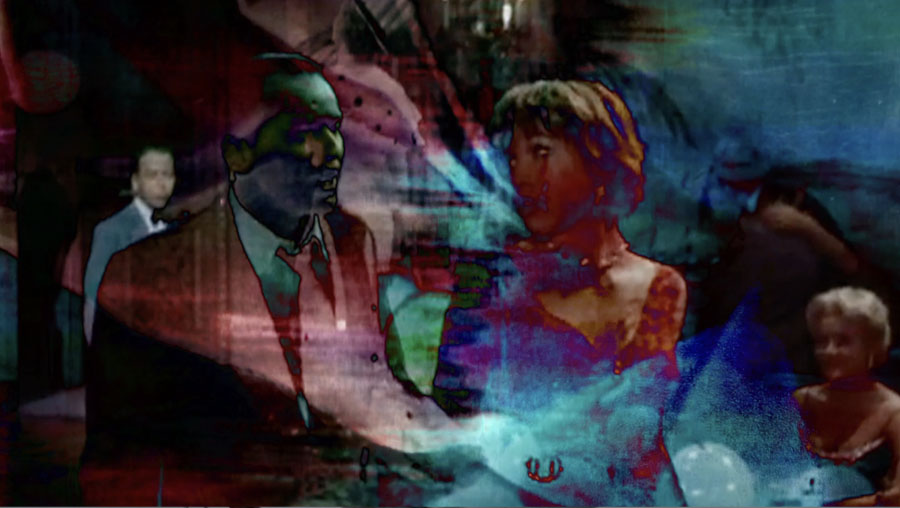 This week, we’re excited to show Gina Telaroli’s Silk Tatters, a deeply sensual experimental montage composited from original footage and images drawn from film and art history. In addition to her filmmaking practice, Telaroli is an accomplished curator, archivist and critic, and we find in Silk Tatters a movie made by a compulsive, perceptive watcher of the world. Her characters are borrowed from other films, but they too are people who gaze at what they see in a mixture of rapturous love and wild fear. They also dance and sing and dream, until nature reasserts itself in a flower or a field. Silk Tatters premiered in 2015 at the Museum of the Moving Image’s First Look Festival, before playing in several other festivals and gallery contexts. Gina described the film’s creation in the following way:

“In the fall of 2011 I was introduced to Vincente Minnelli’s Brigadoon, a movie that contends with the complicated nature of progress, the improbability of remaining in the past, and how the battle between the two can sometimes leave you heartbroken. The movie screened on 35mm at BAM, and in-between the two evening screenings programmer Jake Perlin spoke about the transition that was happening from 35mm projection to digital projection. That fall also marked the beginning of a relationship that would take me to new highs and new lows. A few years later Brigadoon, and the entire Minnelli retrospective, was still at the forefront of my consciousness. At the same time my relationship, one built on the rocky foundation of loving and living movies, had reached a breaking point after slowly turning abusive. I understood this was bad even if I couldn’t feel it, if I could only feel devastation at the impending loss and a futile desire to communicate, to somehow make the bad things stop in order to continue on with the good. The result of it all is Silk Tatters, a movie born of movies and an attempt to solve a problem through them, to inexplicably move forward through looking back. The montage, a strict combination of found and newly shot footage and layering different varieties and shades of light (i.e., there’s no direct color manipulation) attempts to build something new by chipping away at the old. To combine the very alive present, flowers and plants captured in Central Park, with the gasping for breath past, our constantly evolving cinematic history. To find a new context for something (someone) once loved.” GINA TELAROLI

Raised in Cleveland, Ohio, Gina Telaroli is an NYC-based filmmaker and the video archivist at Martin Scorsese’s Sikelia Productions. Her feature and short film work has been screened at the Film Society of Lincoln Center, Anthology Film Archives, the Cinemateca Portuguesa, Chicago Filmmakers, the Cleveland Museum of Art, the Museum of the Moving Image, and elsewhere. Her most recent film, This Castle Keep, premiered at the New York Film Festival in 2016. She has also edited and contributed to comprehensive anthologies on the work of William A. Wellman, Allan Dwan, and Tony Scott, and has curated or consulted on film series devoted to their work at MoMA, Il Cinema Ritrovato, the George Eastman Museum and more. Recently, she consulted on “Martin Scorsese Presents: Republic Rediscovered”, a 30-film series at MoMA celebrating the Poverty Row studio, in addition to creating the series trailer and publishing a selection of image essays to accompany the show.