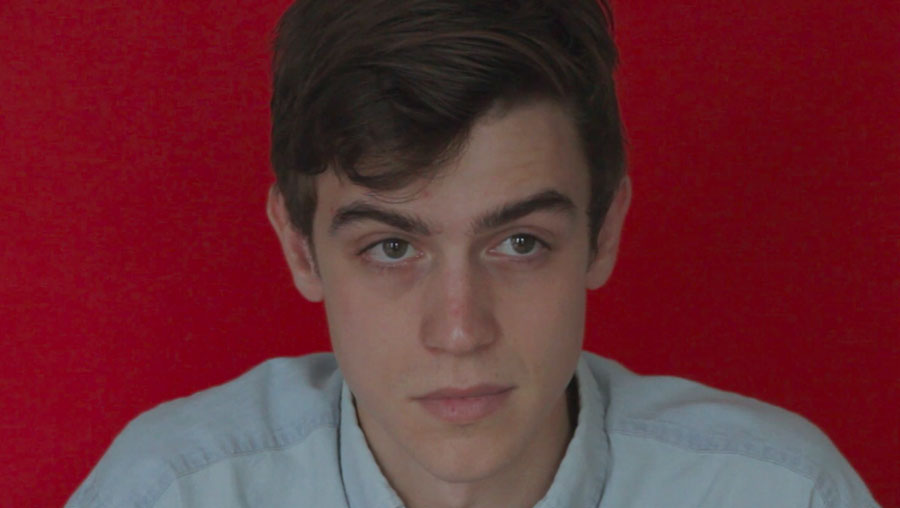 This week, we are presenting the online premiere of New York filmmaker and writer Ricky D’Ambrose’s latest short film Spiral Jetty, selected earlier this year at the New Directors/New Films festival. D’Ambrose demonstrates his distinctive style, in which a methodical aesthetic and form develop a story of deeply intellectual characters. Spiral Jetty focuses on a young archivist who is hired by a lauded American critic to whitewash her late psychologist father’s reputation. The film is comprised of composed single shots, close-ups of faces on backdrops, inserts of newspaper clippings, and VHS home video clips.

Since he began writing his first feature Notes on an Appearance six years ago – which D’Ambrose recently shot – the filmmaker has been exploring in his shorts how to solve certain aesthetic and conceptual questions. His shorts, including this one, are a reflection on building a certain visual language to bring his stories to screen.

The concept for Spiral Jetty came from a cutaway from an actor’s face to a newspaper clipping that exists in D’Ambrose’s previous short Six Cents in the Pocket (2015). D’Ambrose wanted to make a short based on this organizing principle. The character of the deceased psychologist is inspired by both, according to D’Ambrose, “psychologist Albert Ellis, who helped popularize cognitive therapy in the United States, and the American artist Carl Andre, whose role in his wife’s death is still unclear.”

“I also think the film originated from wanting to pair close-ups of faces, shot head-on in front of red walls, with The Rite of Spring.” RICKY D’AMBROSE

Ricky D’Ambrose is a filmmaker based in Brooklyn who graduated from Columbia. He started shooting films of some sort after being struck by The Shining (1980) at age nine. Starting in 2013, Ricky D’Ambrose made a series of documentary shorts on filmmakers such as Chantal Akerman, Bruno Dumont,and contemporary New York directors such as Alex Ross Perry, Dustin Guy Defa and Nathan Silver – which can be viewed on his Vimeo page. His short Six Cents in the Pocket, which Richard Brody wrote about for The New Yorker, premiered in 2016 at the Berlinale. He also works as a journalist for publications including weekly journal The Nation, magazine n+1, Mubi Notebook, and industry journal Film Quarterly, published by the University of California Press in Berkeley.

Ricky D’Ambrose has just finished his debut feature Notes on An Appearance (2018).  It tells the story of  “a young man who disappears amid talk of violence and demagoguery, leaving behind an obscure cache of letters, postcards, and notebooks.”  The film stars Tallie Medel, Keith Poulson, and Bingham Bryant.