The Argument a film by Clara Aranovich. 2011, USA, 13 min. With Melvil Poupaud. A moving and funny tale centered around the question: how does a man become a father? 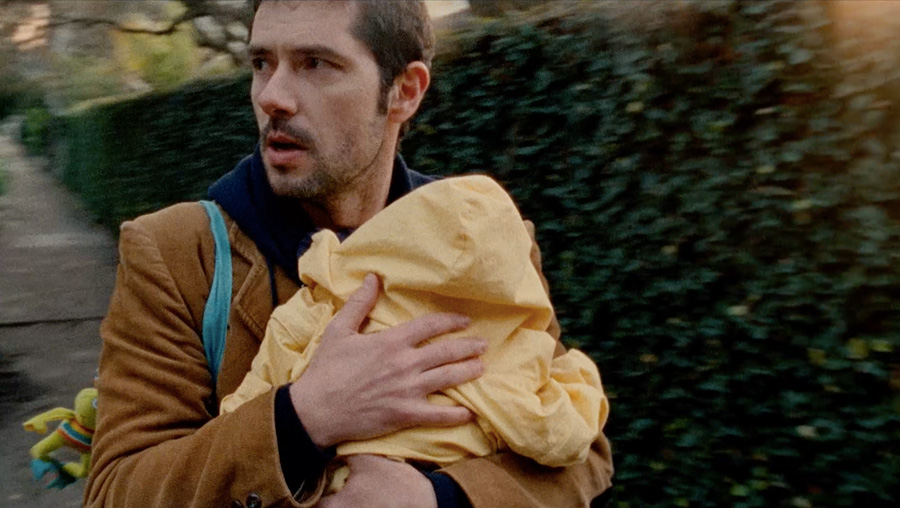 Here is a moving and funny tale about fatherhood starring the great French actor Melvil Poupaud. The Argument is the first short film that Los Angeles based director and producer Clara Aranovich made after film school. It premiered at the Stockholm International Film Festival in 2011. Shot on Super 16 mm and finished on 35 mm, The Argument opens on a French man, played by the formidable Poupaud, who is having a massive argument over the phone with the mother of his infant child. She leaves him wallet-less with their wailing baby in New Orleans. Aranovich wanted to explore how a man becomes a father. The young filmmaker had once heard that women become mothers during pregnancy, but men become fathers once the child is born.

“I love films that don’t really require an understanding of the language in order to be impactful, and miscommunication is at the heart of much of our grief; so I made the man a foreigner in the US. This is perhaps also influenced by the fact that both of my parents immigrated here with little grasp of the English language.” CLARA ARANOVICH

Aranovich decided not to include subtitles for the French or English versions of the film – and succeeded in making a film that doesn’t need every word to be understood to deliver its emotional outcome. She approached Melvil Poupaud’s agent with the script and the actor responded to the piece. He had also worked with the filmmaker’s uncle — the Argentinian cinematographer Ricardo Aronovich who worked with directors such as Costa-Gavras, Alain Resnais, Marguerite Duras and Raoul Ruiz. She had always wanted to shoot in New Orleans, a city she longed to visit based on her love for William Faulkner and Sherwood Anderson. Louisiana also happened to be a great place for filming for practical reasons due to its tax incentives and experienced film crews.

Clara Aranovich has since directed the short film Primrose that premiered at the SXSW festival in 2015. That film focuses on a love story between a woman and a one-of-a-kind creature. Aranovich was born in a cinephile family and grew up close to The Stanford Theatre in Palo Alto. From the age of seven, she knew she wanted to direct films. She studied Creative Writing at Dartmouth and Film Production at USC’s School of Cinematic Arts. She has directed a number of commercials for brands including Major League Baseball (for whom she is the first woman to ever direct a commercial), Toyota, Milk, JCPenney, Microsoft, Chevrolet, and LG, among others. Aranovich was also the lead producer of James Franco’s film Yosemite (2015). She is currently writing her next short film and developing her first feature.