The Boatman a film by Zack Godshall. 2015, USA, 14 min. With Joseph and Selina Gonzales. Mythical endeavors and the endurance of love along Louisiana’s endangered coastline. 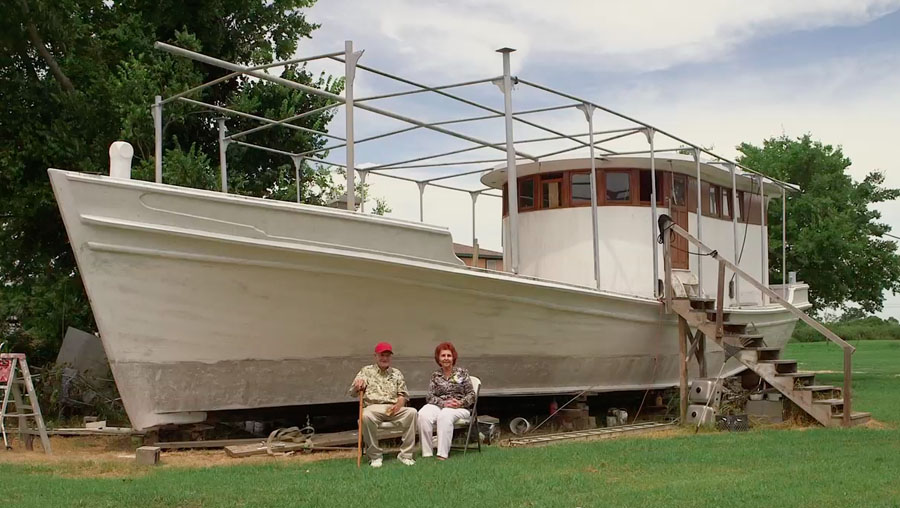 During the next two weeks, in partnership with the Champs-Élysées Film Festival — where seven films will screen in a special section dedicated to New Orleans — Le Cinéma Club honors New Orleans by showcasing two different portraits of the city and its surroundings. The Champs-Élysées Film Festival, which was created six years ago by French producer and distributor Sophie Dulac, presents French and American films in some of Paris’ finest movie houses on one of the most famous avenues in the world. This year, the festival opens with Sean Baker’s The Florida Project, and features much anticipated films such as Jeune Femme by Léonor Serraille (this year’s Caméra d’or in Cannes) and festival darling Rat Film by Theo Anthony. You can find the full line-up on the festival’s website. This week, Le Cinéma Club presents The Boatman, a touching short documentary made by Louisiana-based independent filmmaker Zack Godshall. It tells the story of Joseph and Selina Gonzales, a couple approaching their 71st wedding anniversary who live on Louisiana’s vanishing coast close to New Orleans. As they reflect on endurance, love and fortitude, we are invited to visit the 60-foot boat that Joseph has been building — one of the few things that resisted and survived Hurricane Katrina. The short was made for the six-part series New Orleans, Here & Now for Time Magazine. Godshall initially found out about Joseph and his mythical endeavor to build a 60-foot long boat while filming God’s Architects, another documentary by the filmmaker that presents marginalized artist-architects and their divinely inspired structures and installations.

“The Boatman is a tribute to all people who live along Louisiana’s endangered coastline, and in particular, it’s a tribute to Joseph and Selina Gonzales, whose marriage of 71 years has endured far more than hurricanes and floods and produced more than an entire fleet of oyster boats could ever hope to haul.”

Zack Godshall makes films about overlooked people and places that exist on the fringes of culture.  His work often combines documentary and narrative forms, and his first two narrative features, Low and Behold and Lord Byron, premiered at the Sundance Film Festival.  Godshall’s documentaries have garnered awards at film festivals around the country.  His most recent project, Hogwash, is a web miniseries of eight 10-minute episodes featuring slices of life in the fictional city of Oubliette, Louisiana. The filmmaker describes them as a “blend of realism and absurd, outrageous comedy.”  You can watch the first season here, and the second season will be out soon.  Zack Godshall is also an assistant professor at Louisiana State University.

The Boatman was produced by Noah Stahl, Brad Becker-Parton, and Dan Janvey, and is presented on Le Cinéma Club courtesy of Janvey and Stahl’s Court 13, the filmmaking collective behind Beasts of the Southern Wild.