The Children of the Night a film directed by Caroline Deruas with Yves Donval, Adèle Haenel, Arthur Igual and Felix M. Ott. Forbidden love amidst the French liberation through the lens of a modern woman. 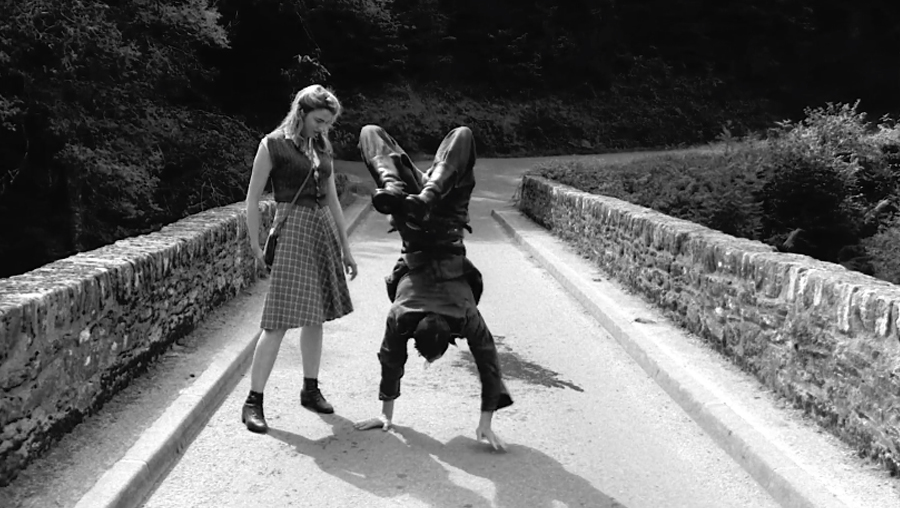 It tells the story of a young French woman from a resistant family who falls tragically in love with a German soldier in the French countryside at the end of World War II. The main characters are played by Adèle Haenel and Felix M. Ott. Caroline Deruas broaches the difficult and dark topic of the ‘femmes tondues’ during the French liberation – but she does this with a modern woman’s perspective, with finesse and intelligence. In little more than twenty-five minutes, the filmmaker manages to build a narrative that sheds light on a historically delicate subject, while also telling the story of forbidden love and its consequences. The film also reminds us of classical black and white films, with an economical and efficient plot that focuses on a few well developed characters.

“I absolutely had to shoot in black and white because I have a lot of trouble with historical representations of that period that are modern looking and in color. It’s essential to be able to delve into History. I also didn’t want a modern black and white look, shot on color film then converted into black and white. A wanted true black and white, with grain, almost golden.” CAROLINE DERUAS

The film is shot in 35mm – Caroline Deruas is a filmmaker that is still very attached to celluloid film. She is not against digital but is worried by the progressive disappearance of the earlier format, especially since she wants to use film to tell the narrative of her next projects. The lighting for The Children of the Night was done by her director of photography, Pascale Marin, whom she met on set while working on Sauvage Innocence (2001) by Philippe Garrel. Caroline Deruas was Garrel’s assistant while Pascale Marin assisted Raoul Coutard (one of the great French cinematographers, who worked on a number of films by Godard and Truffaut). Caroline Deruas was long unsure about whether or not to make the film – even though there are many films and books on the subject, the historical dimension of her project was daunting – but, as a feminist, she felt the need to talk about it. She feels like we can always shed new light on events such as those.

The documentary Tondues en 44, by Jean-Pierre Carlon was her first exposure to this historical reality. It showed the close up of a shaved woman who is walking in the streets – an image that haunted her for a long time. She also used archival videos and videos on Youtube as inspiration material for her last scene in the film. “I thought there was nothing stronger than to show these people having a good time, celebrating, with pride, facing the camera. It’s absolutely frightening,” says Caroline Deruas.

Caroline Deruas was born at Cannes, and assisted projections at the festival since the age of six. Early on, cinema became a necessity for her, and as an adolescent she already wanted to write and make films. Her love of film blossomed with friends from high school, including filmmaker Yann Gonzalez (whose brother, Anthony Gonzalez, from M83, is the music composer for Children of the Night.) She then met Philipe Garrel upon arriving in Paris, and worked with him on a number of movies. In addition to L’Étoile de mer and Children of the Night, she made a short political film to protest Sarkozy’s election in 2008: Le Feu, le sang, les étoiles. We are eager to discover her first feature length film, L’Indomptée, which will be released in French movie theaters early 2017.