The ‘High Sign’ a film by Buster Keaton and Edward F. Cline. 1921, USA, 21 min. With Buster Keaton, Joe Roberts and Bartine Burkett. Murderous gangs and a must-see car chase from a legend of American silent comedy. 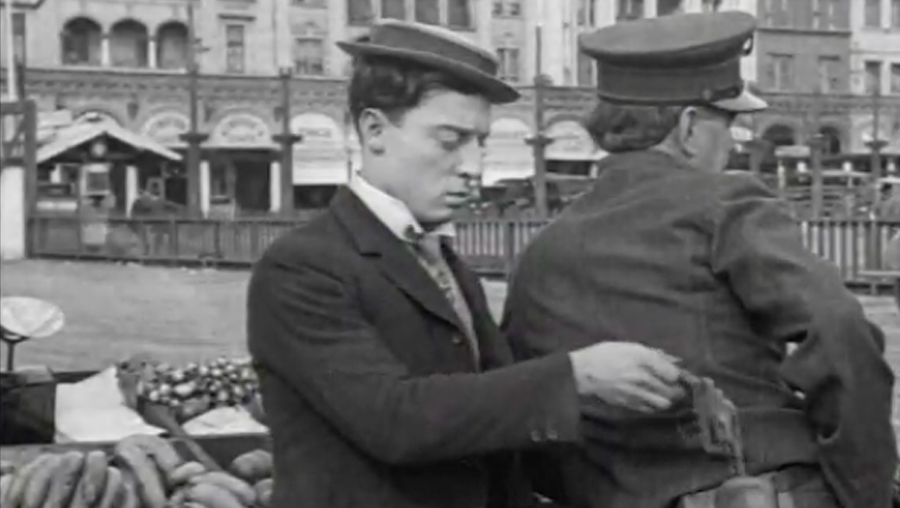 We couldn’t be happier to announce that the Safdie Brothers are taking over programming on Le Cinéma Club for the month of September! The great New York filmmakers have chosen four eclectic picks, from classics to works by new talents and rare gems.

Josh and Benny Safdie’s latest feature, a nocturnal chase thriller set in Queens and starring Robert Pattinson, confirms that the filmmakers are two of the most exciting American directors working today. Good Time is now playing nationwide in the US, and it will be released in France later this month. The Safdies’ program begins this week with The ‘High Sign’, a 1921 black-and-white short by one of the very first legends of American film comedy, Buster Keaton. Keaton plays a drifter who cons his way into working at an amusement park shooting gallery and ends up being hired by both the murderous gang the Blinking Buzzards and by the man they want to kill. The film ends with a must-see wild chase in a house filled with secret passages.

“From the newspaper gag on, this short film by Buster Keaton is a nonstop ride of laughs and ingenuity. The alliteration in the title cards is one thing but the climax with the split level set and endless sight gags and movement is so beautiful and funny it reaches levels of filmmaking and humor still ahead of the times. This is one of Keaton’s best shorts because it follows no rules and has a joke every millisecond, all while preserving its humanity! Long live Keaton!” BENNY SAFDIE

The ‘High Sign’ was Keaton’s first work ever produced. It wasn’t the silent filmmaker’s favorite, but his contemporaries and audiences didn’t agree. Indeed, this very early work of his is already masterful. His talent can be admired both in the efficiency and modernity of the screenplay and in the inventiveness of the gags, which are at times surreal and at others extremely physical. The final act is brilliantly staged and orchestrated on a multi-leveled set – like a dollhouse cut in two – in which Keaton perform impressive acrobatics.