The Layover a film by Ashley Connor & Joe Stankus. 2017, USA, 10 min. With Mike Adams and Ed O’Brien. A tender short by real-life partners, capturing a day in the shared life of two flight attendants. 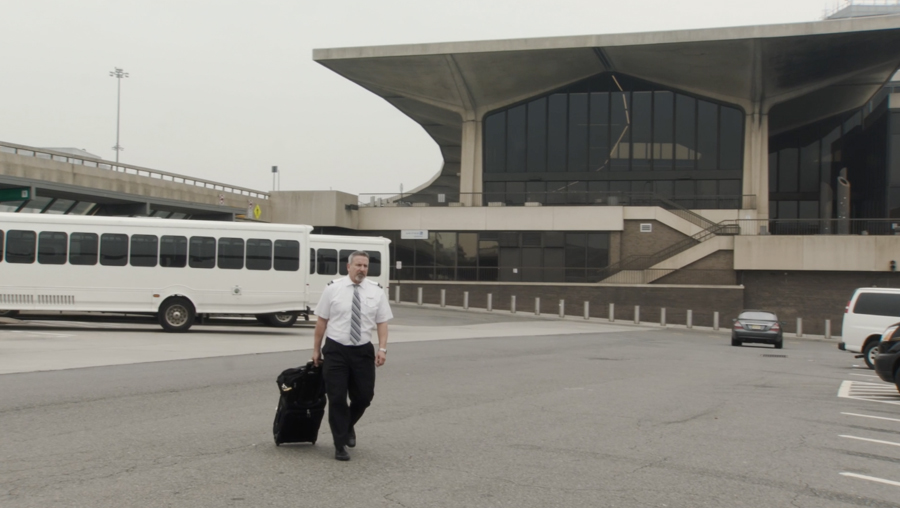 This week, we’re premiering a tender, witty short film co-directed by American cinematographer Ashley Connor and director-editor Joe Stankus. A selection from the 2017 New York Film Festival, The Layover captures the intimate life of two flight attendants, during the one-year anniversary of the passing of a loved one. Partners in real life, Connor and Stankus have been making a series of short films starring their family members. The Layover is the second film they’re releasing, and it focuses on Connor’s uncles. The idea for the series originally came from their desire to work on a project together, without necessarily needing an expensive budget or asking for infinite favors from friends in the industry. Their crew consists of the two of them.

The filmmakers wanted to avoid making straightforward documentaries about their relatives, and instead create short, engaging narratives. Stankus further explains their self-imposed challenge: “How do we make not just a documentary, but actually a story? How do we incorporate the narrative elements that we like about movies into a project that’s utilizing real people?” Connor and Stankus’ process is to create a tight structure, the skeleton for a story in which their relatives can fill out the film with their real personalities and natural charisma.

“It is a look into small moments in people’s lives, the little moments that people never talk about but that define us the most.” JOE STANKUS

This thoughtful structure, along with Connor’s experience and great talent as a cinematographer in covering a scene and allowing for multiple viewpoints, engages the viewer in a film that feels like a documentary but isn’t one. For Connor, it is also a way to approach her work differently: “I now work with big crews, nice cameras and lights. I have that part of my work that is very stylized and planned, and this gets a bit more towards direct cinema. For me, it is about stripping everything away and having it be almost plain. It has no bells and whistles and that’s what interests me. I’m not trying to heighten it stylistically, and getting back to shooting with a stripped down package is really freeing.”

Ashley Connor and Joe Stankus are filmmakers based in NYC. Connor is one of the most exciting new American cinematographers. Her recent credits include with Dustin Guy Defa’s Person to Person, Josephine Decker’s Madelines’ Madeline, Adam Leon’s Tramps and Desiree Akhavan’s The Miseducation of Cameron Post, which won the Grand Jury Prize in Sundance this year. Joe Stankus is a director and editor who also works as a film projectionist at the IFC Center. His short films have been selected at various festivals including the New York Film Festival, The Maryland Film Festival, The New York Jewish Film Festival, and the Independent Film Festival Boston.

You can see more of their respective work on their websites: ashleyconnor.net and joestankus.com. The first short film in the series, The Backseat (2016), focuses on Stankus’ grandparents, and the pair has now shot two upcoming films, one film revolving around Stankus’ father and his brother, and the other film made during a cruise with Connor’s family.