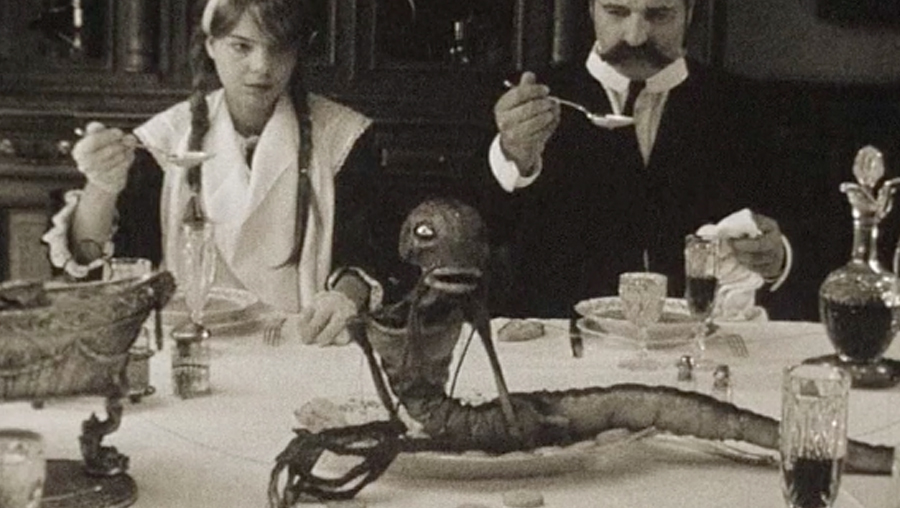 We are introducing two short films by new French director Adrien Beau, whose cinematic universe is both fascinating and beautifully crafted. Self-produced and shot on Super 8, The Little Mermaid tells the story of a strange little sea creature who brings trouble and madness into a bourgeois family at the beginning of the 20th century. A bigger production, his second short, Irregular Seasoning, is an amusing twist on the life of the Marquise de Brinvilliers that chronicles her crazy poisoning endeavors against the dull court that surrounds her. If his two films are silent, they are nevertheless more expressive than many of the talking films we’ve seen. His images, the world and characters that he has put in motion are profoundly alive. They make us travel through time in a beautiful, cinematic way.  It’s for a very practical reason that Beau decided to make his first short silent: he didn’t think he was good enough at writing dialogue to include speech in his script. One can only salute a young filmmaker who knows to identify his strengths, and Beau comes up with a creative solution to overcome the constraint.

It might also be the silent quality of his films that inspires the magic that seems to emanate from them, a quality that brings the shorts closer to the past eras in which their stories take place. Adrien Beau and his actors watched a ton of silent cinema to understand better how to tell a story relying only on images and performance. The filmmaker evokes the films of Chaplin, whose talent – for telling sad or political stories while filling them with humor – Beau admires.

Beau self-produced The Little Mermaid with less than two thousand dollars, which he inherited from his grandfather.  His talented costume designer Anne Blanchard, who he met in high school, made all of the costumes for $300. As a child, Beau had been struck by the story of The Little Mermaid – this “totally misogynistic and racist story about a girl who comes from a world below that gets punished for trying to elevate her position in the world” as he explains.

Having loved this first experience behind the camera, Beau wished to make a second film. Agnès B., the French designer and arts patron, who also produced filmmakers such as Harmony Korine, offered to produce it. Beau wanted to make something more “classical” than The Little Mermaid, and took on that desire by its literal meaning, setting the story in the 17th century. In adapting the story of Marquise de Brinvilliers, he sought to tell a story that was ultimately completely punk as “its heroine kills everyone and gets murdered at the end.”

“I’ll never make films in which people wear jeans, even if I wear some. That is not what I like to see on the big screen.” ADRIEN BEAU

Adrien Beau is a self-taught film director who grew up in Paris. After high school, he wanted badly to escape his parents’ nest and he went straight to work. He found a job as an usher at the Bouffes-du-Nord theater, where he also did set design and made puppets. After seeing his work, a friend invited him to intern for John Galliano, who was the designer for Dior at the time. This is also where The Little Mermaid was born in its first form as a sculpture that Beau made from scraps of shagreen, a leather made of fish skin. At the age of 10, Beau acted in a film and, observing the process, thought it wasn’t that hard to make movies!  At the time, his favorite film was Edward Scissorhands (1990). Ironically, if people sometimes compare his work today with Tim Burton’s films, Beau doesn’t quite relate to any other of Burton’s films.

After seeing and admiring Irregular Seasoning, Werner Herzog invited Beau to his Rogue Film School last year. Adrien Beau is currently working on getting his first feature into production – this time including dialogue and a screenwriting collaborator. The film is based on the life of the early 20th century cult French actress Sarah Bernhardt. Beau recently also started developing a vampire story based on a story by Tolstoy. These two projects sound like perfect fits for the young director, and we cannot wait to see them on the big screen!