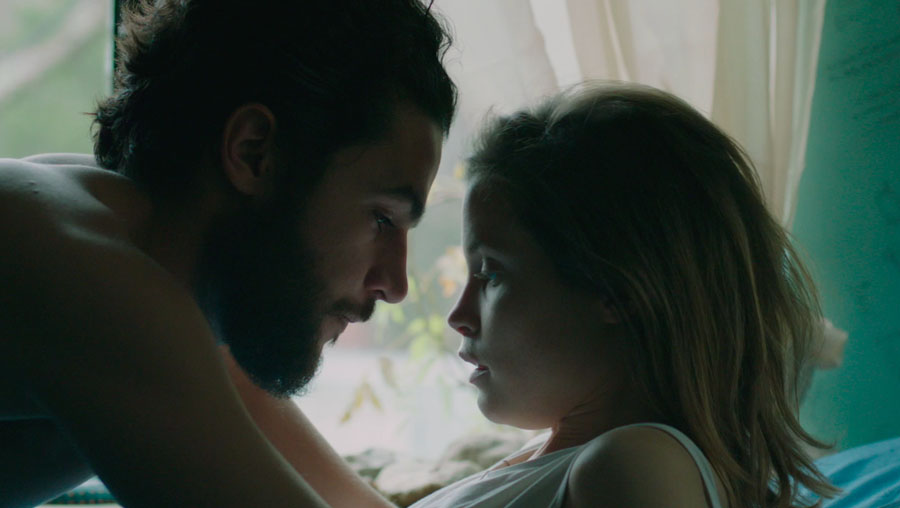 This week, we are presenting The Sleepwalker, Mona Fastvold’s beautiful debut feature starring Chris Abbott, Brady Corbet, Stephanie Ellis and Gitte Witte. The film, which premiered in U.S. competition at Sundance in 2014, is a mysterious psychodrama set in a house in the woods, with a distinct cinematic aesthetic, gorgeously realized by Fastvold. In The Sleepwalker, which Fastvold co-wrote with Corbet, Kaia and Andrew are a young, new couple renovating a secluded family estate in Massachusetts. The sudden and unexpected arrival of Kaia’s sister and her fiancé disrupts their lives, awaking repressed memories and odd behavior.

Mona Fastvold co-wrote the film with director-writer-actor Brady Corbet (The Childhood of a Leader). She was first inspired by her dance background, and her own experience as a sleepwalker: “I was always fascinated by how your body takes over and starts controlling without your consciousness being aware of it.”

The filmmaker started exploring the physicality of these themes with her two actresses in an experimental short, and during that process she found the location for The Sleepwalker. Fastvold wrote her script with the Le Corbusier-inspired house in mind – enjoying later the creative challenge of shooting her film within and around the house: “The exciting thing about having the constraint of shooting in one location is that you can be really specific with how you plan your shots and blocking.”

Fastvold impressively shot the film in nineteen days, surrounding herself with actors and collaborators she knew well. She worked with her cinematographer Zachary Galler – The Sleepwalker was his first feature – on how to create dreamlike night sequences that would capture slightly more than what the human eye can see. They imagined the light and color temperature of their daytime exteriors as a kind of permanent twilight. Working on the end of the movie, Fastvold wanted to recreate the frustrating, haunting experience of the sudden, inexplicable disappearance of someone – “one that leaves you with an open wound”.

“Fastvold has painted a resonant tableau of dysfunction.” THE NEW YORK TIMES

Mona Fastvold is a Norwegian director living in New York City. She moved to New York to pursue her film studies in her early 20s. She had already started her career as an actor in television and film in Norway. In 2011, she started directing music videos and a year later she received a grant from the Norwegian Film Fund for The Sleepwalker. She co-wrote The Childhood of a Leader, the first feature by Brady Corbet, who is also her partner. That film, which stars Bérénice Béjo, Liam Cunningham, Stacy Martin and Robert Pattinson, won Best Debut Film and Best Director at its premiere at the Venice Film Festival in 2015. Mona Fastvold co-wrote Mustang, Laure de Clermont-Tonnerre’s debut feature, which recently finished shooting and will be released in 2019 by Focus Features, with a cast including Matthias Schoenaerts and Bruce Dern. Mona Fastvold is currently working on her second feature, The Bleaching Yard, which she plans to shoot in 2018.