THE SWEET ATMOSPHERE PHASED AT 120º AND WENT BLANK! WHEN THE UNIVERSE COLLAPSED a film by STANDING ON THE CORNER ART ENSEMBLE directed by GIO ESCOBAR. 2018, USA, 60 min. SUMMER MUSIC FESTIVAL. A trippy, Flash-animated journey into the collective unconscious of the African diaspora. IN COLLABORATION WITH XL RECORDINGS.

Founded in 2016 by Gio Escobar, the Brooklyn collective Standing on the Corner is a genre-bending new voice in experimental art. In conceptual performances, their music creates textured suites from jazz, soul, rock, and spoken-word sources. The Sweet Atmosphere Phased at 120º and Went Blank! When The Universe Collapsed, which screened at Gavin Brown’s Enterprise in 2019, is their psychedelic, cinematic tapestry, with contributions from Solange, Earl Sweatshirt, and more.

In an opening PowerPoint lecture, Terence Nance, the film’s narrator, frames the film as “action-based” psychotherapy, which targets trauma embedded in the history of the African diaspora. Although Escobar explained that this process is personal, set in the “secret classroom” of one’s own mind, it also deals with the “interdimensional gunk of the unconscious,” present-day weight resulting from alternate-universe versions of the self, and by extension, one’s ancestors. “In order to reconcile this interdimensional gunk,” Escobar went on, “one must ‘travel’ (as one does in various forms of Hypnotherapy), by way of the Afroprojection, into these alternate universes.” The Sweet Atmosphere journeys into that collective unconscious, landing “somewhere between travelogue and therapy session.” 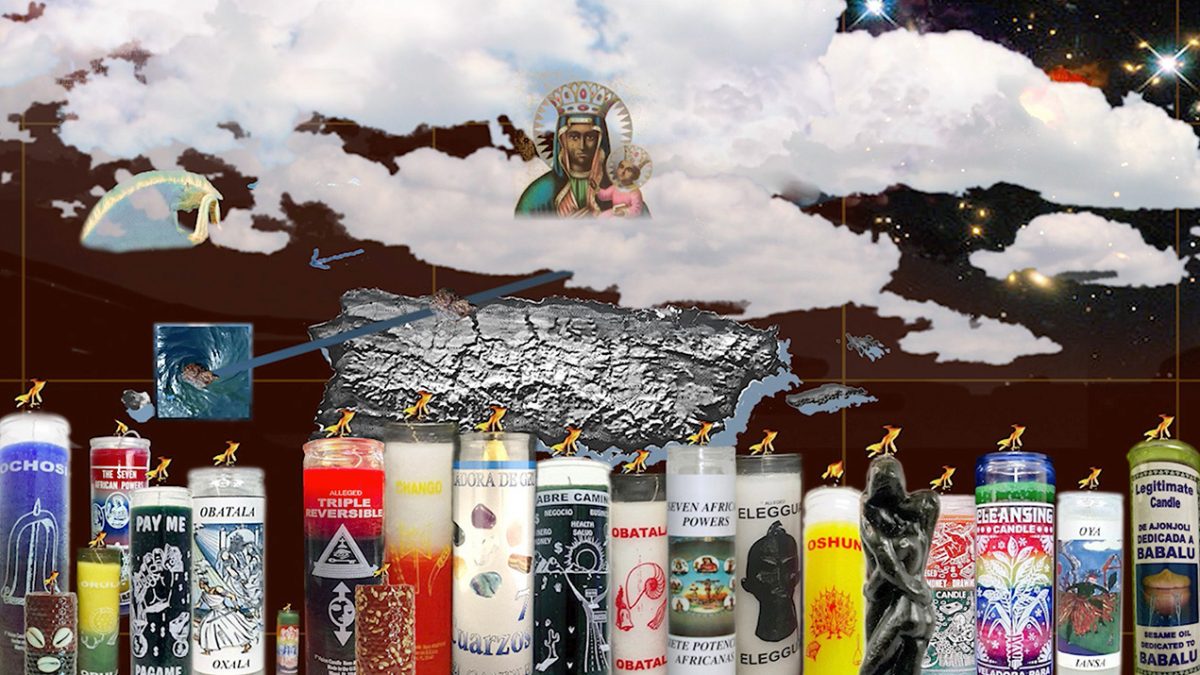 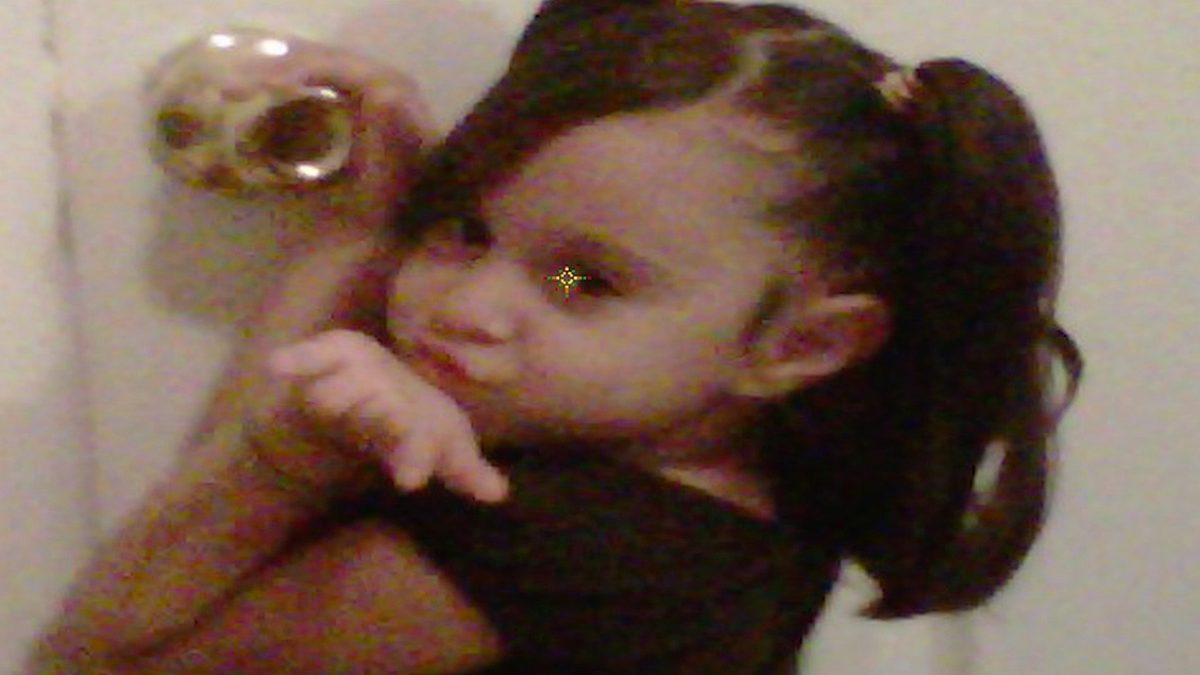 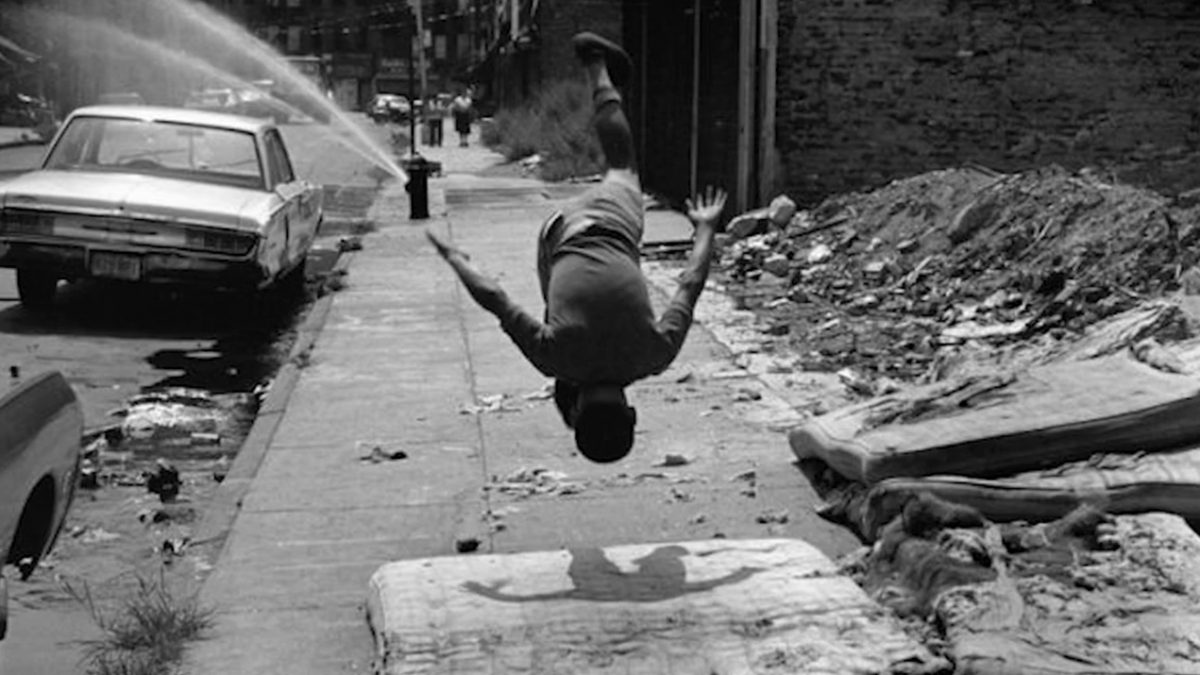 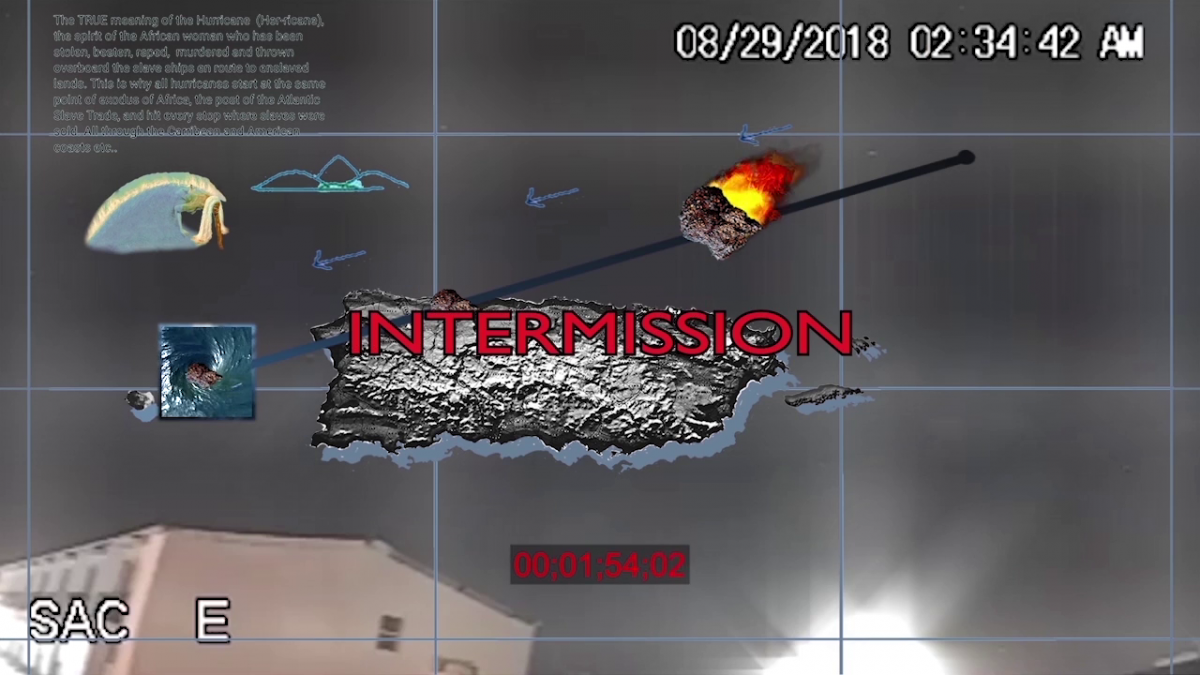 “The film itself offers no ‘real’, physical spaces, but instead propels itself through an unpredictable and chaotic historiography; the passing of time depicted by a decaying cartographic document that gradually unfolds, grows, dies, then resurrects.” GIO ESCOBAR

The central projection—and parallel dimension—in the film is a Flash animation of a meteor hurling toward Puerto Rico. As it travels in slow motion, Escobar sources a diverse set of influences: the writings of psychologist Ja A. Jahannes, the paintings of John Chandler, Solange covering Diana Ross’s “Believe in Yourself” from The Wiz, and, in Escobar’s words, “the mystery of the ocean and early computer games.” Escobar described these eclectic voices as “the final thoughts, in the form of poetry, prayer, song, and incantations, of those inhabiting a world with no future.” With that destruction comes a resurrection: the film’s trippy burst of intellectual and artistic life.

Escobar is based in Brooklyn, NY. With Standing on the Corner, he’s blended music and visual art in site-specific shows, designed to “equate hyperlocal incidence to cosmological wisdom.” The group has recorded two studio albums, most recently 2017’s RED BURNS, alongside live albums and EPs; in 2020, the group directed a video for their single “Angel” starring Melvin Van Peebles. They have also produced records by Solange, MIKE, Earl Sweatshirt, and Danny Brown. Escobar is currently working on a futuristic project about memory.

Credits for
THE SWEET ATMOSPHERE PHASED AT 120º AND WENT BLANK! WHEN THE UNIVERSE COLLAPSED
directed by
GIO ESCOBAR
animated by
Gabriel Rodriguez Fuller
grids/graphic design by
abraham mohamed el malakwy