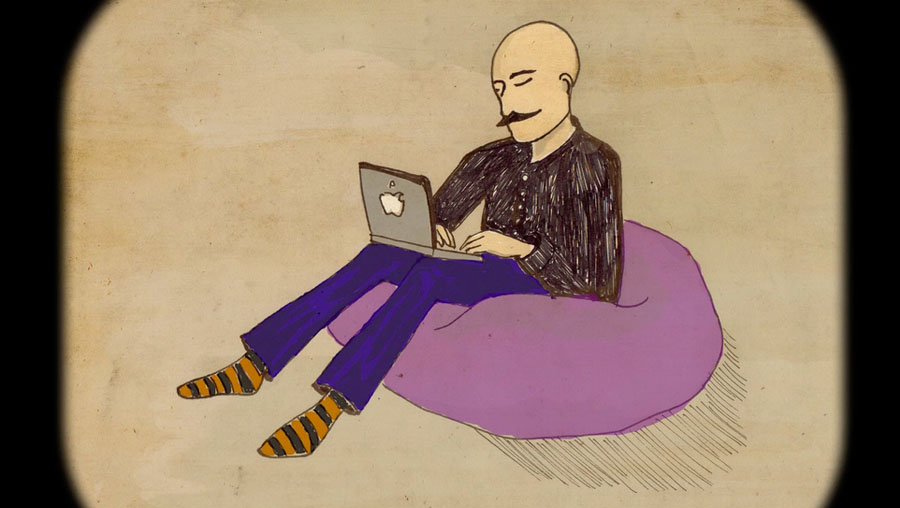 This week, we are honored to present a selection of three early short films by American director David Lowery, on the occasion of the release of his daring and poetic new film A Ghost Story, starring Rooney Mara and Casey Affleck. Lowery creates a new, unique and personal entry in the genre of ghost stories that examines the existence of a ghost, simply draped in a bedsheet, lingering throughout time, in pain over the love he has just left and the house they shared.  It is wonderful to go back to Lowery’s first homemade works and dive into the themes that occupied his mind as a young filmmaker – especially as one of them begins with precious footage from the very first film he made, at the age of seven, entitled A Ghost Story. The three short films are presented here from the most recent to the oldest. My Daily Routine (2011), a three-minute hand-drawn animation about the quotidian habits of a young and striving filmmaker, is narrated by Lowery. A Catalog of Anticipations (2008) is a beautiful, simple five-minute film constructed out of stills – following a young girl (Lowery’s sister) collecting strange bones and creatures from the ground. Finally, also narrated by Lowery, Some Analog Lines (2006) features the director discussing his early filmmaking endeavors, and his reflections on the importance of a director’s signature, as he ponders the arrival of CGI versus the value of stop-motion.

There’s no better introduction to these films than the one Lowery kindly sent to Le Cinéma Club:

“The three short films presented here this week were made between 2006 and 2011. Within that half-decade, I found my voice as a filmmaker; later on I lost it again and had to re-find it—but there’s nothing like the first time, which is why I want to offer these particular efforts in concert with one another. These aren’t the only films I made during this period, but they fit together particularly well. They’re all very brief. They are all amateurish in the truest and most positive sense of the word. Two are narrated by me. Two are made up almost entirely of still images; the third is essentially about the way in which the others were made. Of particular note, two contain whispy connective strands to A Ghost Story, the film of mine that is currently out in theaters, and which is itself pitched in the same tone and key as these three films; hopefully I’ve gotten better at holding it.” DAVID LOWERY

David Lowery is director, screenwriter and editor born in Wisconsin and later raised in Irving, Texas. His first feature St Nicks (2011) followed a brother and a sister on the run and was made for $12,000. His second feature Ain’t Them Bodies Saints, starring Rooney Mara and Casey Affleck, premiered at the 2013 Sundance Film Festival where it was awarded the Best Cinematography award for a then-still upcoming Bradford Young. After Saints, Lowery was hired to co-write and direct Disney’s Pete’s Dragon (2016). He recently finished shooting his new film The Old Man and the Gun, based on a New Yorker piece by David Grann (The Lost City of Z). The film’s magnificent cast includes Robert Redford, Casey Affleck, Sissy Spacek, Danny Glover, Tika Sumpter, Tom Waits and Elisabeth Moss. Fox Searchlight plans to release the film next year.