A SUNDAY MORNING a film by Damien Manivel. 2012, France, 18 min. With Ivan Borin. A melancholic stroll through suburban Paris from an up-and-coming director. 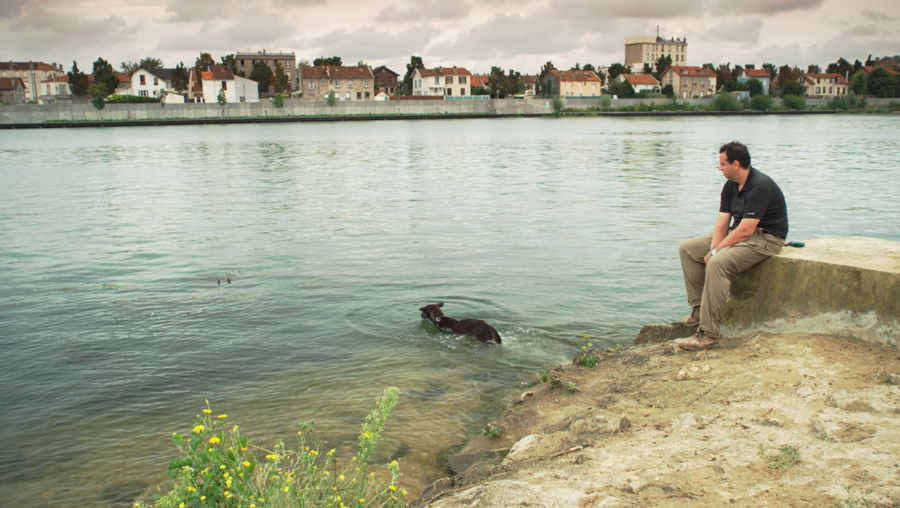 Here is a short film by Damien Manivel, whose second feature Le Parc was released in France in January 2017 to much critical acclaim. Damien Manivel’s cinema is characterized by striking, mostly fixed camera set-ups — tableaus the characters move through. A Critics’ Week selection at the Cannes Festival in 2012, where it was awarded the Nikon Discovery Award, A Sunday Morning follows a man walking his dog in the Paris suburbs – his Sunday morning routine. The film, which has no dialogue, invites the audience to join the man on his melancholic stroll. Manivel’s initial desire was to shoot a dog alone in the city, although he quickly realized after his first tests that the idea didn’t work. He therefore added a man to the equation, imagining a mundane couple with an almost burlesque tendency: the man is heavy and clumsy, the dog skinny and old. Another defining characteristic of Manivel’s cinema is the importance of the location, which is often one of the director’s starting points for his films. Here the location is the Paris suburbs where Manivel grew up, a place that he found very ugly at the time. But returning to the suburbs with a director’s eye, he noticed how photogenic the urban landscapes were. The film was shot in different suburbs around Paris, and the script was mostly a shot list that considered directional movement: the man and the dog walking down, then up, then wandering, and losing track of their place, and finally walking back up.

“There was first the shock of Bresson. Today still, I struggle to understand how he did it. Then the Asian directors. I was spellbound by Tsai Ming-liang, but also Hou Hsiao-hsien and Ozu.” DAMIEN MANIVEL

Damien Manivel first studied at a circus school and became an acrobat and a dancer. He went on to study film at Le Fresnoy in the north of France. Prior to A Sunday Morning, Manivel directed the short The Lady with the Dog (2010), which was nominated for a Tiger Award for Short Films in Rotterdam. Before Le Parc, his first feature A Young Poet was awarded a Special Mention at the Locarno Film Festival. He is currently shooting a film in Japan.