We Demand a film by Kevin Jerome Everson & Claudrena N. Harold. 2016, USA, 10 min. A road trip of the mind against a back-projected sky. 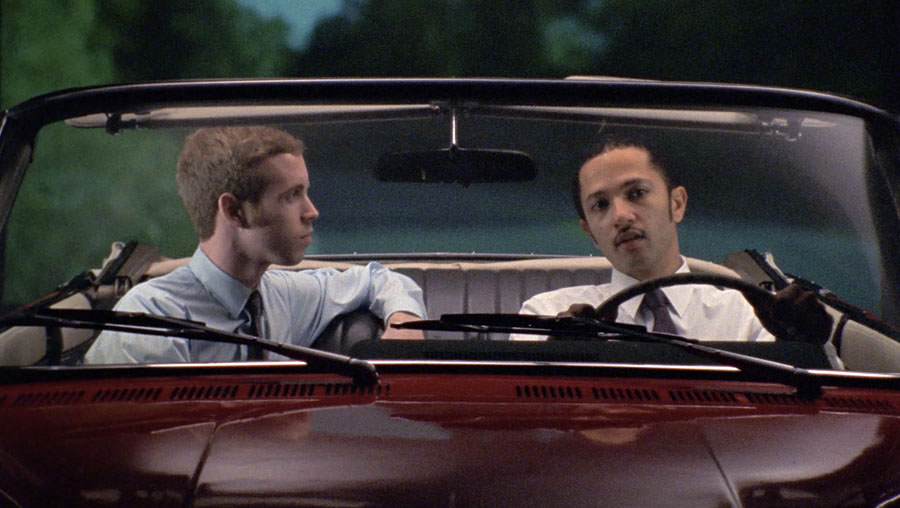 As the first part of a spotlight on BAMcinemaFest, Brooklyn’s essential annual celebration of American independent film, Le Cinéma Club is proud to present Kevin Jerome Everson and Claudrena N. Harold’s We Demand, a portrait in miniature of radical African American activist James Roebuck and his participation in the Vietnam War protest movement. By blurring the line between historical recreation and fiction filmmaking at its most artificial, We Demand becomes a woozy, wandering road trip of the mind, a journey toward political action set against a back-projected sky. The short world-premiered in the Berlinale’s Forum section in 2016, and will be making its New York premiere at BAMcinemaFest on June 24th – part of a special program dedicated to Everson’s films that includes several products of his vital ongoing collaboration with Harold (find more details here). In the short, Ricky Goldman plays James Roebuck, the University of Virginia’s Student Council’s first African-American president and a galvanizing force behind the school’s historic 1970 Vietnam War protests. Everson and Harold choose to depict Roebuck during a few precisely rendered moments of reflection and preparation. He composes his list of demands for the university’s administration, and reminisces about the political role models of his youth, while the film’s rich, 16 mm-shot colors give way to the stark black and white of archival footage. As Everson has said of his style and formal preoccupations:

“Instead of standard realism I favor a strategy that abstracts everyday actions and statements into theatrical gestures, in which archival footage is re- edited or re-staged, real people perform fictional scenarios based on their own lives and historical observations intermesh with contemporary narratives. The films suggest the relentlessness of everyday life – along with its beauty – but also present oblique metaphors for art-making.” KEVIN JEROME EVERSON

Kevin Jerome Everson is the director of nine feature films, including The Island of St. Mathews (2013) and Tonsler Park (2017), and over 135 shorts. He has been the subject of mid-career retrospectives at the Harvard Film Archives, the Tate Modern and the Whitney Museum, and the recipient of fellowships from the Guggenheim Foundation and Harvard University. With critic and writer Greg DeCuir he will co-curate the 2018 Flaherty Seminar, running June 16th to 22nd.

Claudrena N. Harold is a Professor of history and African American studies at the University of Virginia, Charlottesville, where she specializes in African American history, black cultural politics, and labor history. Her books include the The Rise and Fall of the Marcus Garvey Movement in the Urban South and New Negro Politics in the Jim Crow South. She has co-directed and produced six films with Everson, most recently How Can I Ever Be Late (2017), which also screens in BAMcinemaFest’s June 24th program.

Le Cinéma Club would like to thank the filmmakers and Madeleine Molyneaux from Picture Palace Pictures, for making this program available on the site.