What Lies Beneath the Sky a film by Vladimir de Fontenay. 2015, France,  9 min. With the voice of Chantal Akerman. Narrated by Chantal Akerman, a personal portrait of New York during Hurricane Sandy. 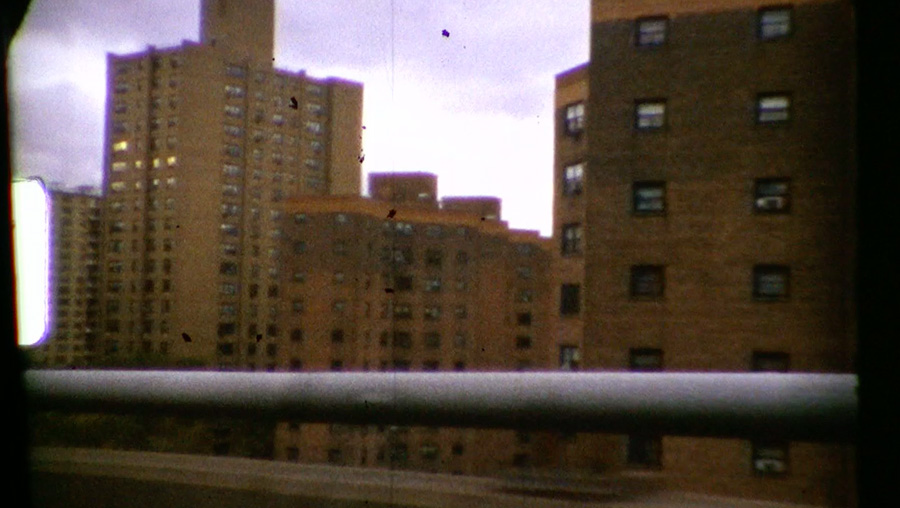 What Lies Beneath the Sky is a portrait of New York City hit by hurricane Sandy shot in Super 8 by the young French director Vladimir de Fontenay. The voiceover is narrated by the late great Belgian filmmaker Chantal Akerman. The film was selected and shown in numerous films festival including 2015 Tribeca Film Festival. De Fontenay studied Film at the Tisch School of the Arts at New York University. On the night Sandy was about to hit the city, De Fontenay decided to take the Super 8 camera and film he had in his apartment and go shoot the empty streets. He returned the next morning to capture the damage caused by the storm. The young director shot over those two days around Manhattan, Brooklyn, The Rockaways and Staten Island. While shooting these images, another film that De Fontenay’s professor Ira Sachs had recently shown was on his mind: Chantal Akerman’s News From Home (1977), in which the director reads letters sent by her mother over long takes of New York City. De Fontenay wrote notes as he was filming. He wanted someone to narrate them, and he thought of Chantal Akerman.

Behind these personal images hides the charming story of a young director meeting a famous older filmmaker. De Fontenay didn’t know Akerman; he simply found her contact through a journalist he knew that had written a piece on her in Cahiers du Cinéma. De Fontenay emailed Akerman and she replied, after a month, saying that she would be happy to record the voice-over. It took more than a year for them to meet in the recording room. First they were never in the city at the same time, and later Akerman didn’t show up at a series of planned sessions. But De Fontenay couldn’t imagine anyone else narrating the film now that she had agreed. Akerman finally showed up – on De Fontenay’s birthday. She gave the director insightful notes on his edit, and they re-edited the film together, after which she recorded her voice for it. The two said goodbye. A few months after The Tribeca premiere of the short, Akerman died.

“She read and reread the notes I had written while sitting on a tall chair in the tiny studio of the 11th floor at Tisch. She smoked a second cigarette. Then a third. She got back to work, reworked some excerpts, rethought some words but mostly discussed with me the power of silence. ‘You have to give room to the words’ she said.” VLADIMIR DE FONTENAY

As De Fontenay couldn’t record sound when he shot the film, he added effects from found hurricane videos, and asked the band Toys to score the film. Vladmir De Fontenay recently finished shooting his first feature Mobile Homes, starring Imogen Poots, based on his short film of the same name showcased earlier on Le Cinéma Club.