Zona inquinata a film by F. J. Ossang. 1983, France, 21 min. Gangsters, cowboys, and rockers battle through the lens of a punk futurist filmmaker. 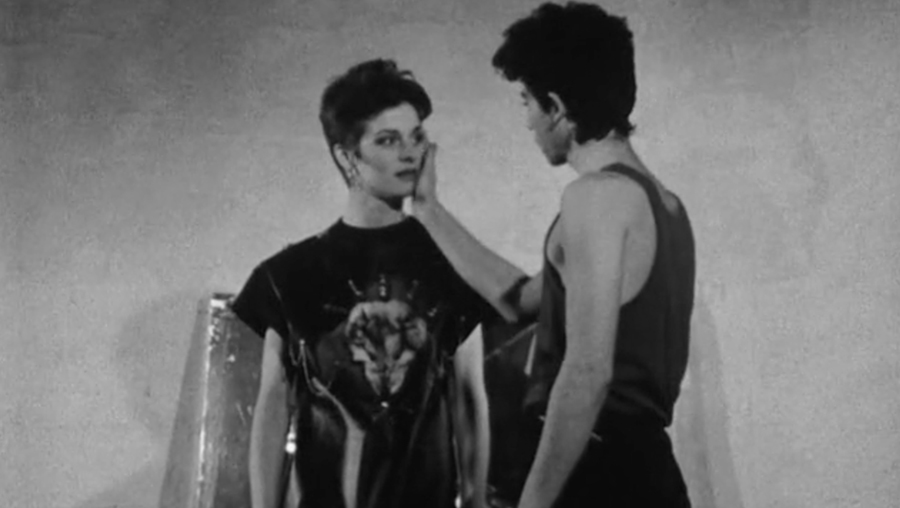 This week, Le Cinéma Club steers its course toward the Zona inquinata. It’s a deceptive, illusory place, a wasteland where all lives are on the line, where phantoms wander and discarded genres burst into flame. It’s also one of the first films of French filmmaker F. J. Ossang, a punk futurist always looking to the past, but in order to imagine worlds to come. We present this audacious, lyrical and cinema-saturated early work on the occasion of the US release of Ossang’s new film 9 Fingers (this year’s winner of the Best Director award at Locarno), opening November 2 at New York’s Anthology Film Archives alongside a complete retrospective.

“Zona inquinata” means “polluted area” in Italian. This pollution is partly that of disparate languages and cultures into each other, and the incendiary compounds that result. This is a film in which a French-speaking gang with a motley of accents plot to kill an American cowboy with the name of German car. The cowboy watches an English punk on TV, and the punk looks back with murder in his eyes… or is it recognition? We’re in Europe, or America, or perhaps some confusion of the two, a non-place that only exists within television or its viewers’ imaginations. But the Polluted Zone is also the world, and like the Zone in Tarkovsky’s Stalker (1979), a place both sick, deranged, and teeming with life and strange possibility, including that of a new conception of “the international”, one political and poetic.

In his debut short, 1982’s The Last Enigma, Ossang proposed a history of cinema: Méliès, Caligari, Clair, Eisenstein, Buñuel, Chaplin, Debord and… himself. Zona inquinata (1983) is the first fulfillment of that promise. It was made with the close collaboration of other filmmakers and artists, including Pascale Ferran (who shot it), Robert Cordier (who acts), and Ossang’s band MKB (who provide the propulsive title track).

“After The Last Enigma, my “tract” film from 1982, I shot in three days and in 16mm Zona inquinata. It’s a 21-minute fiction – a compression of film noir in three acts. It was selected in Cannes in 1983, in the Perspectives du Cinéma Français section.” F. J. OSSANG

F. J. Ossang was born in 1956 in the Cantal region of France. The film critic Nicole Brenez has described him as a practitioner of “poetry in all its forms… if poetry means a violent outburst of vitality.” He is a prolific novelist and poet. His band MKB (Messageros Killers Boys) has been active since the early ’80s. He is the director of five feature films and five shorts, including Treasure of the Bitch Islands (1990, Grand Jury Prize winner at Entrevues Belfort) and Doctor Chance (1997, nominated for the Golden Leopard at Locarno).