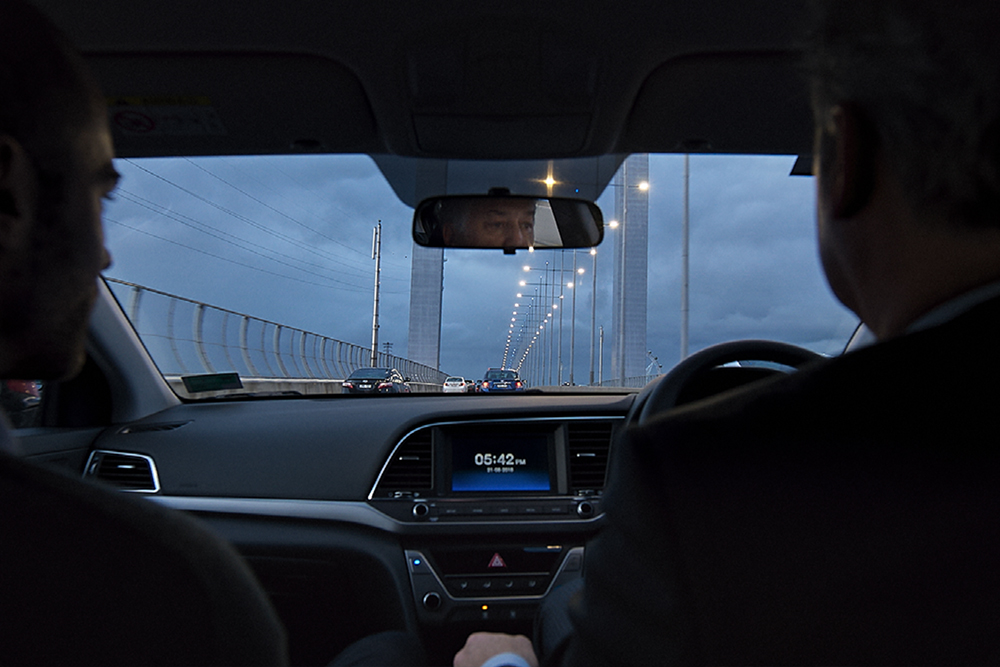 David Easteal’s debut feature The Plains is a poignant epic set almost entirely inside a Hyundai Elantra. The 180-minute, International Film Festival Rotterdam standout follows Andrew, a man in his late 50s, through a year of commutes home from a legal center near Melbourne. Easteal maintains a parallel career as a barrister, and based The Plains on his real-life friendship with Andrew, his former carpool buddy. Easteal’s earlier shorts have screened at the New York Film Festival and the BFI London, and in 2015, he received the Award for Emerging Australian Filmmaker at the Melbourne International Film Festival.

The Plains screens at Film at Lincoln Center’s Art of the Real festival on Saturday, April 2, with Easteal in attendance for a Q&A.

Q. You shot this film over the course of an entire year. How did you and Andrew decide to start shooting your commutes, and how did you know when you were finished?

A. The film was actually quite planned out, although I had no idea if the form would work. We shot incrementally over 12 months; we usually had two shoot days per month, each confined to one take during rush hour. The two main narrative arcs—the death of Andrew’s mother, and his friendship with the younger co-worker—were based on a year when the two of us worked together in the outer suburbs of Melbourne. We found out we lived near each other, and Andrew started to drive me home. In the car, I would hear Andrew’s calls to his mother and his wife Cheri, and I learned about his life; his mother passed away, and I could sense the effect this had on him. The film is a composite of these commutes, some events that occurred whilst shooting or years prior, and some fiction. It took a little while to find our feet—trust had to develop between myself, Andrew, and Cheri—but slowly, things started to flow. Whilst the topics of conversation were scripted, the dialogue had to be improvised for authenticity. Neither Andrew or myself are professional actors, and perhaps this improvisation gives a sense of spontaneity.

I liked the idea of finishing in ostensibly the same place where we began. The protagonist has, for all intents and purposes, gone nowhere: He is driving home on the same highway after a day at work. But time has passed, things have shifted, and we can sense that difference. He is perhaps even more alone—his co-worker and friend has left the workplace, something which Andrew expresses a desire to do but his options are now limited due to his age. His mother has passed away, and Cheri is working again. He has no one to speak to on the phone. Andrew says early in the film that both his mother and Cheri expect a call from him on his way home, but I sense that it is he who derives comfort from this connection. Now he is faced with the silence of the drive, this otherwise disconnected “dead time” of the commute. For me that was more interesting than having anything externally change for the character.

Q. You also shot your previous short mostly in a car—is there a reason you’re drawn to this setting?

A. I spent a good deal of my childhood in cars. The suburbs of Australia are generally sprawling and you need a car to get around. I obtained my driver’s license at the earliest date possible. As a child I’d often be sitting in the backseat, watching the world, listening. I also recall being attuned to the sound of my father’s car arriving home at the end of the working day: when it first turned into the concrete driveway from the bitumen road, then the crunching sound as it rolled onto the gravel area where he would park, and the sound of the handbrake being pulled up. The repetition of the daily commute is something I was aware of very early on.

I like the sense of moving through the world, but being separated from it, that a car affords. There’s a loneliness to the car in Australia. Unlike, say, the car of Kiarostami’s films, where there’s often a sense of connection with community; the driver is regularly stopping and asking questions and engaging with all sorts of people. The car is inherently cinematic: the stillness of the interior and the movement of the exterior; the pure documentary seen through the windshield—totally out of the filmmaker’s control—contrasted with the fiction occurring inside the car. It was exciting to film that way, as an element of chance entered each shot.

A car is also a unique space for conversation. Both people are looking forward, permitting more intimacy in a strange way. There is something confronting to me about a direct gaze; not looking directly at someone allows for a deeper sense of safety, which is one reason why I positioned the camera in the backseat. On one level, we are confined to the car, but we are able to go so much further through memory, space, and time because of this intimacy.

Q. You practice law in addition to filmmaking. Do you find that the two professions inform each other at all?

A. Not to any conscious extent. I can’t say I’m inclined to make legal dramas, at least at this stage! Whilst the law is a very thorough, precise, and exacting profession, I get a much greater sense of openness, looseness, and freedom from this film. I seem to have a need for stability in my life, and also a contrasting need for something less stable. I’m reminded of Chekhov’s somewhat misogynistic quote, “Medicine is my lawful wife, and literature is my mistress. When I get fed up with one, I spend the night with the other. Though it is irregular, it is less boring this way, and besides, neither of them loses anything through my infidelity.” Whilst I don’t necessarily adhere to how it’s expressed, the sentiment behind the statement perhaps has some truth. It is nice to turn to both, but it can be draining trying to live two lives.

More than anything, though, the dichotomy provides me a means to earn a living. Unfortunately, I can’t do so making three-hour films about middle-aged men driving home from work! I was able to work entirely independently, as up until post-production the film was self-financed. I’m not sure I’d like to work exactly like that again, but it’s very difficult to obtain funding for more artistically-driven film projects in Australia, particularly for a first feature. There’s an emphasis on commercial viability with the government funding bodies—there are requirements for international sales agents and local distributors to be on board, which realistically was never going to happen with this film. I cherish the fact that I was able to have such artistic freedom, in large part thanks to my day job.

Q. What is a piece of advice that you’ve never forgotten?

A. Perhaps I’ll keep with the car-related theme. When we were driving, I remember my father would always say that you’ve got to watch out for drivers who have a hat in the back of the car, in the rear window. It was usually a wide brimmed hat that was visible when he said this. My mother would always tell me that the journey is what’s important, not the destination.

Q. Is there a location in a film—real, historical, or imaginary—that you wish you could visit?

A. Maybe the Tokyo of Ozu’s postwar films, in an izakaya when some former soldiers, now salarymen, break out in song having had a little too much to drink, with Chishū Ryū sitting there saying nothing but saying so much with just a sigh. Or the Taiwanese countryside of Hou Hsiao-Hsien’s period films, watching a performance by the Puppetmaster Li Tien-lu. Or maybe a London pub in the ’40s or ’50s from a Terence Davies film, where everyone’s singing along and you get a rush of emotion in their otherwise stiff-upper-lip lives. I seem to be drawn to singalongs, which is strange as I don’t do singalongs or karaoke in real life.

Q. What was the last film you saw and loved?

A. I can’t limit it to just one, but I watched two films from 2020 recently that I loved, both with the word “days” in the title: Days by Tsai Ming-liang, and The Works and Days (of Tayoko Shiojiri in the Shiotani Basin) by C. W. Winter and Anders Edström.

A. Right now I’m in Mexico City. I’m staying in an apartment in Condesa, which has a window that looks out onto a brick wall. When I walk outside, though, it’s a very nice, green area of the city.

A. As I’ll soon be traveling to New York, I’ve been thinking about Chantal Akerman’s 1989 film Histoires d’Amérique. I showed the film last year to my parents. My mother’s family arrived by boat to New York early in the 20th century, escaping the pogroms in Poland, and the film moved her to tears (so was I, despite having seen it before). It has one of my favorite opening sequences: New York at night from the water, an image similar to that which would have confronted many immigrants, with Akerman’s iconic voiceover. Akerman films the night so well. So I’ll end with one of the beautiful shots in that sequence. 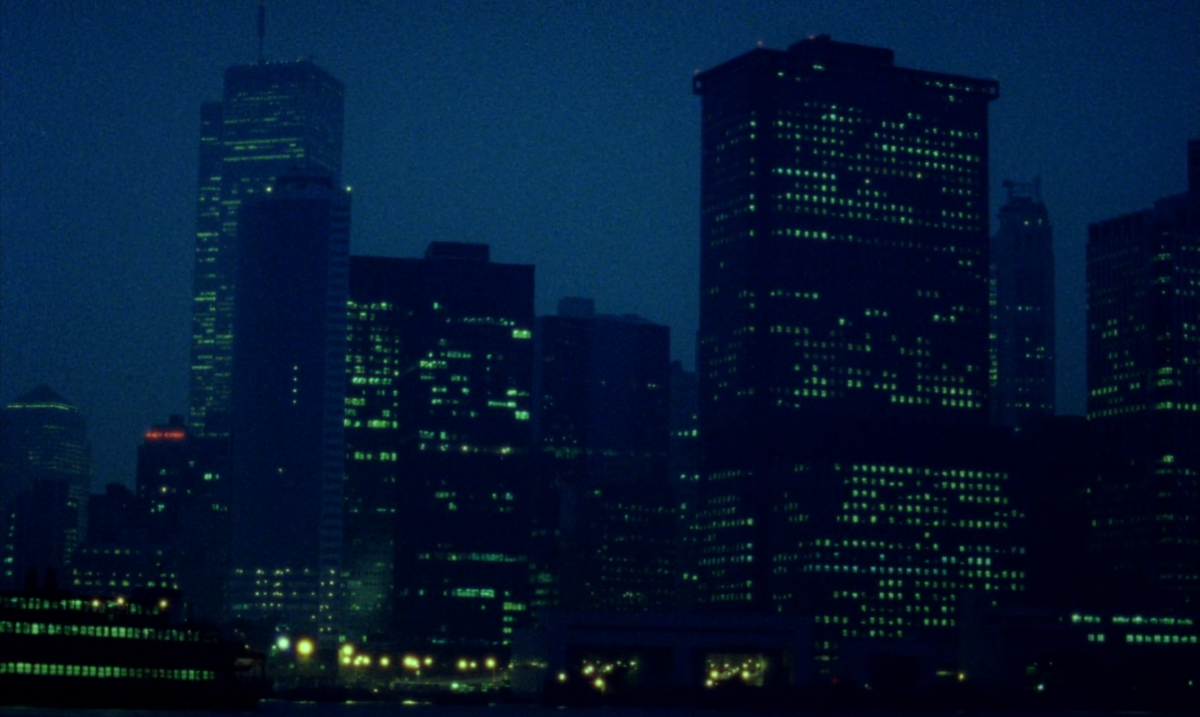